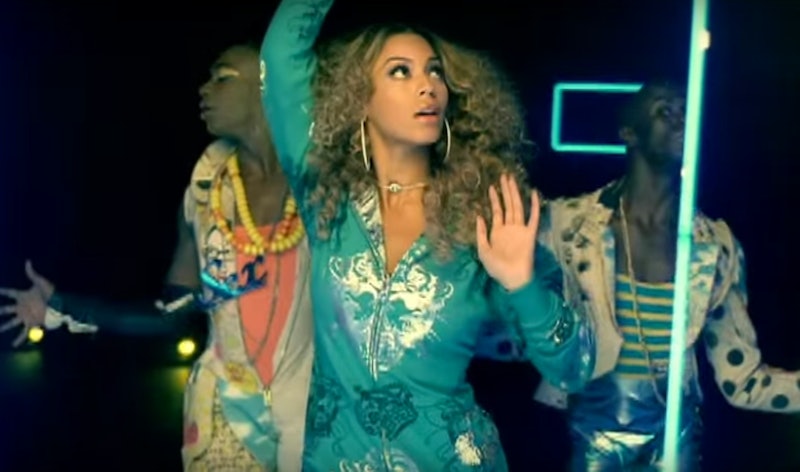 If a wizard knocked on my door and told me he has the power to teleport me to any music video, first of all, I would feel incredibly lucky that he happened to swing by my apartment of all apartments, and secondly, I would probably pick one of the many intergalactic-themed videos that dropped throughout the '90s and '00s. Actually, I would definitely pick one of those vids. Why? For starters, I would be beyond stoked to check out all of the absurd pieces of technology that were dreamed up just for the music videos: A birdcage that's held together by lasers and lasers only! A full-length mirror that may or may not actually just be a hologram! A robot whose primary mission is to distribute homemade confections to humans! Magnets that smile at you and wave at you when you look at them! It is all so ~*kEwL~*!

Oh, man. If Best Buy ever starts selling TV octopi, I will be the first in line. Why watch one TV show at a time when you can feast your eyes on all of your stories at once?

2. The Soda Cup That Morphs Into A Camera

Music Video: “Fly On The Wall” by Miley Cyrus

Apparently, the soda cup/camera transformer is powered by the the moon's rays?

Xtina kicks back in her desk chair as she edits a music video by simply pointing at the images. Supes cool, supes cool. (Q: Is that candlestick a hologram? If so, a hologram candlestick holding up a real candle supes cool x10,000.)

I’ll be the first to admit that I've never been one to keep up with the latest tech trends, but I’ve never heard of or witnessed someone use a spreadsheet text message app on their cellular device. Has this ever been a thing? Because I’m pretty sure it’s never been a thing.

Music Video: “I Want You Back” by Mel B. feat. Missy Elliott

How do you see your reflection in a hologram mirror? And how does a hologram clothing rack hold clothes? Are the clothes holograms, too? Wait, are the racks even holograms? What is haaaappeniiiiing?

Lemme get this straight: If I was going to take a phone call on this melting monstrosity, I would have to sprint from one end of the handset to the other? That seems like an exhausti— Oh, what? What’s that you say? You say it’s a sculpture and it isn’t actually a working telephone? Hm. Agree to disagree.

Music Video: "I Believe In A Thing Called Love" by the Darkness

Wow, drumsticks that emit powerful lasers? What'll they think of next!?

At the beginning of the video, this, uh... thing blooms only to reveal a different member of Danity Kane perched upon each metallic petal.

It’s one thing for a character from your favorite sitcom to call “time out” and talk to the camera. But real bubbles literally pouring out of your television set? That’s another level.

11. The Party Room That Morphs Into Different Party Rooms

"Wow. That party was wild.""I'd say so. My head and stomach feel like crap sandwiches.""Are you hung over?""Maybe? Neither my stomach nor my head will stop spinning.""Oh, probably because that party room wouldn't stop spinning into other rooms. Sorry about that. I've been there before. I should've told you to take some Dramamine before we went.""Hnnnnngh." [Crumples into fetal position and spins in circles.]

A droid that hands out lollipops to humans all day? Uh, this droid rules. It should’ve had a cameo in The Force Awakens.

Music Video: “No Scrubs” by TLC

Donning some stunning blue armor, Lisa “Left Eye” Lopes battles/dances with a camera inside a giant disco ball. I don’t know, maybe this is what Dance Dance Revolution will be like in the future?

14. The Animated Magnets Stuck To The Mirror

Are the magnets battery powered? Or are they just alive? I'm going to go with option B. Because option B is the better option, duh.

Music Video: “Bring It All To Me” by Blaque

Is it a teleportation device? A domicile? A magical shrinking machine? A toaster? All of the above?

By simply pulling on a string attached to the deceptively simple sweater, the wearer’s cup size increases within a matter of seconds. Welp!

17. The Capsule Of Gel That Turns Into Busta Rhymes

18. The Perfectly Square Sunny Side Up Egg

In the future, egg yolks look like pads of butter?

Now, what happens if you want to take a nap? Do you just curl up on a chair and hope it decides to hold still for 45 minutes? Or do you just accept that you're going to be pinballing off of the walls for the duration of your siesta?

20. The Artwork That Changes With A Click Of A Button

Sick of the sculpture sitting in your living room? No need to hit up the closest Z Gallerie for a new piece of art. Janet & MJ have just the remote to freshen things up!

21. Every Single Object That Appears In This Video

We end where we began: with Eurodance trio Eiffel 65. It's all so beautiful.

Is there a chance that all of the fanciful devices featured in these music videos will one day exist? Sure, why not? I'm not about to rule it out. Anything is possible, science is cool, never underestimate The Future, etcetera. I just hope I live long enough to see a TV octopus with my own two eyes.