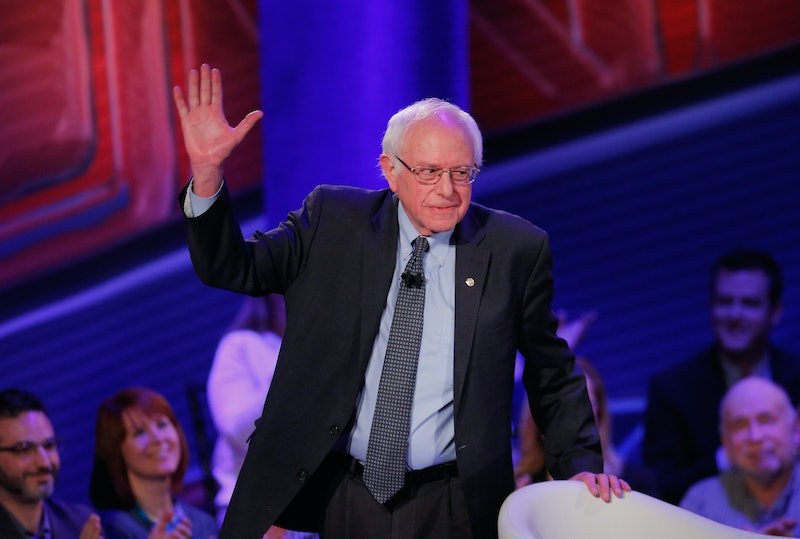 Presidential candidate Bernie Sanders made a bold statement Monday about his ability to champion for women's rights despite his obvious competition in Hillary Clinton, who if elected, would be the first female U.S. president. During CNN's Democratic town hall, Sanders was asked about the gender elephant in the room: How could he, a man, possibly be a better president for women than a female POTUS? In his response, Sanders affirmed that he, instead of Clinton, would be the best choice for women voters, and I agree with him.

The question came from college student and Clinton supporter Alexis Kulash, who also referenced Sanders' recent statements regarding Planned Parenthood and the Human Rights Campaign as being part of "the political establishment." Since giving that interview on MSNBC, he's been hit by a wave of criticism from supporters of the organizations. Kulash asked how Sanders could be more effective for women when it's Clinton that has endorsements from these female-centric organizations. The Vermont senator, however, was quick to dismiss this black-and-white view of both his statements and of himself.

Though he admitted his statements did not come across the way he intended (and also mentioned he was attempting to look at the discrepancy in endorsement policy between organizations' members and their leadership), the senator ultimately pointed to his pro-choice voting record to back him up. Claiming that his record sits at a 100 percent for pro-choice initiatives, he also says that his presidency would work to expand funding for organizations like Planned Parenthood.

Sanders went on to say that he "understood" why women voters would be inclined to vote for a female president. But he adamantly said his record, as well as one significant issue, places him above Clinton on matters pertinent to women:

Sanders also called pay inequality "old-fashioned sexism," saying it particularly impacts women of color. He promised that his presidency would fight this internally, as well as raise the minimum wage to a livable one.

The Vermont senator wasn't all talk at Monday night's forum, either. His voting record truly does show him out-perform Clinton on a number of issues important to women. According to a report by The Huffington Post, Sanders has made paid family leave a centerpiece to his platform, while Clinton, on the other hand, admitted in a 2014 CNN interview, "I don't think, politically, we could get it now." Sanders' wish to raise the minimum wage also extends nationally, while Clinton would look to raise it only in her home state of New York. And like he said, his stance on reproductive rights has been stronger — while Clinton has often touted out the phrase "keep abortions safe, legal, and rare," Sanders has championed a blanket support for a women's right to choice.

Aside from their difference in their track record, Clinton's foundation is certainly something to consider. According to a 2015 report by The New York Observer, the Clinton Foundation received millions of dollars in donations from foreign countries with horrible records of women's rights violations. These millions, collected while Clinton was secretary of state, came from countries such as Saudi Arabia, Oman, Algeria, and the United Arab Emirates.

Now, I can't speak for all women, and neither can Sanders or Clinton. But as someone who was formerly enamored with the thought of having Hillary Clinton (and more importantly, a woman) as president, I admit that Sanders has certainly worked to change my mind. The proof, really, is in the numbers, and what the numbers show is that Sanders, rather than Clinton, has the greatest track record with women, and consequently the best strategies for further eradicating sexism. Man or not, he's someone I can get behind.