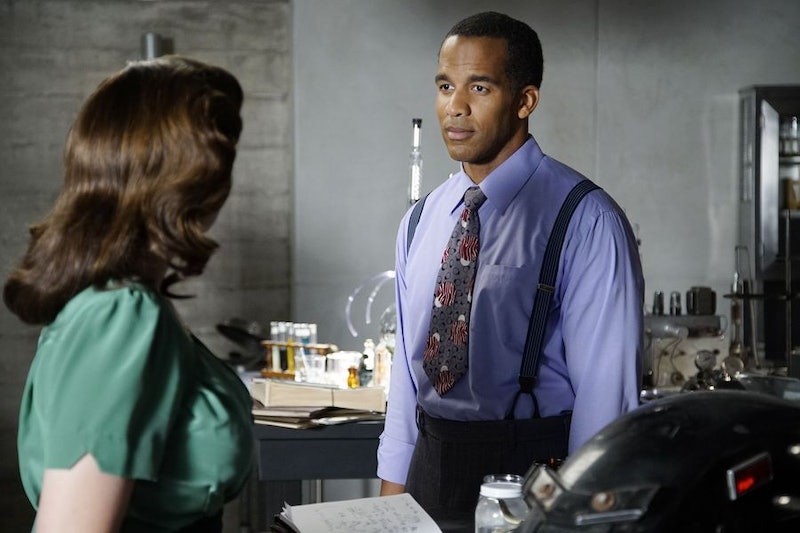 Though she may excel at everything else in her life, Agent Peggy Carter has proven to be unlucky in love. I mean really unlucky. What are the chances that your crush would get frozen in the ice in Antarctica, only to be unfrozen decades later having not aged a day? That is an astronomical amount of bad luck. But we know that will eventually change and Peggy will find lasting love, as Captain America: The Winter Soldier revealed that she eventually gets married and has two kids. Since she deserves a superheroic amount of happiness, I'm always on the hunt for Peggy's future husband. So what about that smart and charming scientist from Isodyne Energy? Will Peggy marry Jason Wilkes from Agent Carter Season 2?

Wilkes does have his strengths as a love interest. He's brave in the face of adversity, as the showdown at Isodyne proves. He's smart, having built some sort of magnetic-containing device for the otherworldly Zero Matter. And he's clearly romantically interested in Peggy. But, ultimately, I don't think Wilkes is the one. Here's why Agent Carter probably won't wind up with Jason Wilkes — at least not for the long haul.

Don't you hate it when your first love gets lost over Antarctica, your second love is practically engaged, and your third love touches Zero Matter and disappears? Agent Carter is devastated when she can't find Wilkes after the Isodyne Energy explosion, so she does have deep feelings for him, but thinking someone is dead is definitely a turn-off. It's a reminder that Peggy's work is dangerous, and it's a mistake to get attached.

He Touched The Zero Matter

About that Isodyne explosion. That's got to change a person, right? It doesn't seem like you can touch some kind of extraterrestrial substance, survive a big explosion, and come back ready for dinner and a movie. I bet Wilkes is fundamentally changed in some way. We just have to learn how.

He's Not So Great In The Comics

In Marvel Comics, a character by the name of Jason Wilkes takes money from the Communists to create an invisibility ray. (Traitor!) It backfires and he becomes invisible. The fact that this TV love interest is also named Jason Wilkes doesn't bode well. The invisibility could reference the discrimination Jason faces and how he's been overlooked due to his race, or it could hint at a major, treacherous change coming this season — perhaps as a result of the Zero Matter.

His new girlfriend seems great and all, but, come on. Carter/Sousa has to work out, right? Their chemistry is undeniable. I'm usually not one to 'ship and even I want that to happen.

In Captain America: The Winter Soldier, Marvel drops the biggest hint yet about Peggy's husband. In a filmed interview at the Smithsonian, she says that Captain America saved her husband during the war. Wilkes was in the Navy during the war, but as an engineer, not on the front lines. Jason may have eyes for Peggy on Agent Carter, but at this point, it doesn't seem like he's the one.