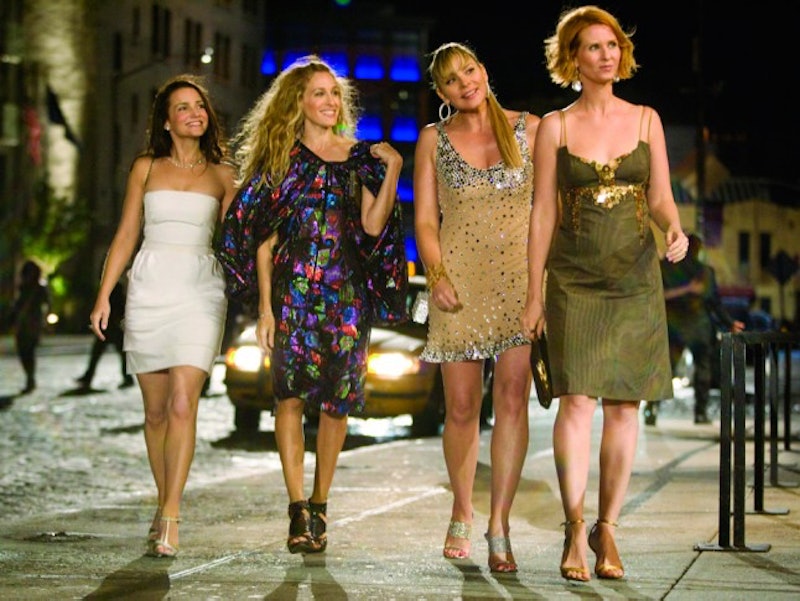 A whole generation of women looked to Sex And The City for relationship and sex advice. Heeding the words of Carrie Bradshaw as if they were fact, when in actuality she was as confused as the rest of us. See, when you re-watch the HBO show now — over a decade after it went off the air — the sex talk is very 1998 to 2004. Hate to say it, but Sex And The City 's view of sex is woefully outdated.

In fact, fans who are still obsessed with Sex And The City after all these years, may want to ask yourself why you ever thought Carrie, Charlotte, Miranda or Samantha knew more than you do about sex. Upon closer inspection, their less than stellar advice was probably holding them back from really enjoying themselves. (Yes, even Samantha.) And by proxy, would now be holding you back too if you took many of their opinions as facts.

Just look at some of the show's quotes that treat anal sex like the biggest taboo and still seem to think women have to do a lot of the work when it comes to getting down. Sure, these women were liberated and could get between the sheets whenever they wanted, but this didn't mean they were having intercourse the way they wanted; often, it still seemed like they were beholden to how society felt they should do it. Charlotte and Carrie, specifically, seem to date themselves with quotes that come off as close-minded or judgmental instead of feminist and free.

These 11 quotes are worst of the worst:

2. "I'm not even sure bisexuality exists. I think it's just a layover on the way to Gay Town." — Carrie

Sorry, Carrie, but a 2015 study showed bisexuality does exist. Unfortunately, this kind of attitude is what has made it hard for bisexual people to find visibility in society — not to mention, learn to understand and come to terms with their own sexuality.

Samantha is dealing with absolutes here, but we're going to have to say this may have to be decided on a case-by-case basis since there is more than one way to have great sex.

4. "I read that if you don't have sex for a year, you can actually become 'revirginized.'" — Charlotte

Just as The 40 Year Old Virgin would teach us a year after SATC went off the air, there is no truth to the "If you don't use it, you lose it" myth.

While the idea of give-and-take isn't a bad one, this idea that you have to do something you don't like in the bedroom doesn't seem like the best advice for anyone involved.

6. "Maybe we were never meant to do it with only one other person. Maybe threesomes were the relationship of the future." — Carrie

The future is now and Carrie's prediction isn't a reality — and most likely won't be. Though, OkCupid has added a polyamorous feature to its site for those who are looking to search for someone else to join their relationship due to a noticeable increase in those interested in non-monogamous relationships.

7. "If he goes up your butt, will he respect you more or respect you less? That's the issue." — Miranda

If this really is the issue, you should kick him to the curb and find someone else who respects you and your sexual choices.

8. "If you really like the guy, what's one little moment of 'ooh, ooh,' versus spending the whole night in bed alone ?"— Charlotte

Nobody got time to fake it. Now it's all about having open conversations with your partner on what you can do together to both have a good time. If that person isn't interested in listening, then it's worth having the bed all to yourself. Think of it this way, here's a chance to break-in that Rabbit of yours.

9. "Men who are good-looking are never good in bed because they never had to be." —Carrie

Let's file this antiquated notion away with "women can't be funny, especially if they're beautiful." It's an absurd generalization that just plain insulting.

10. "You can't date your f**k buddy.... You're going to take the only person in your life that's there purely for sex, no strings attached, and turn him into a human being? Why?" — Samantha

This one is just so wrong. Anyone you sleep with deserves at least the basic courtesy of being treated like a human being. C'mon now.

Charlotte used this to describe a guy who was under the impression that licking her cheek was par for the course in the average after-date makeout. Look, I don't know what that's called, but I do know this is not the right definition of rape so maybe let's refrain from throwing that word around willy nilly, eh, Charlotte?

If you're looking for modern sex advice, these quotes show Sex And The City probably isn't the best place to find it. But, don't worry, you can still steal some great fashion tips from Carrie Bradshaw.