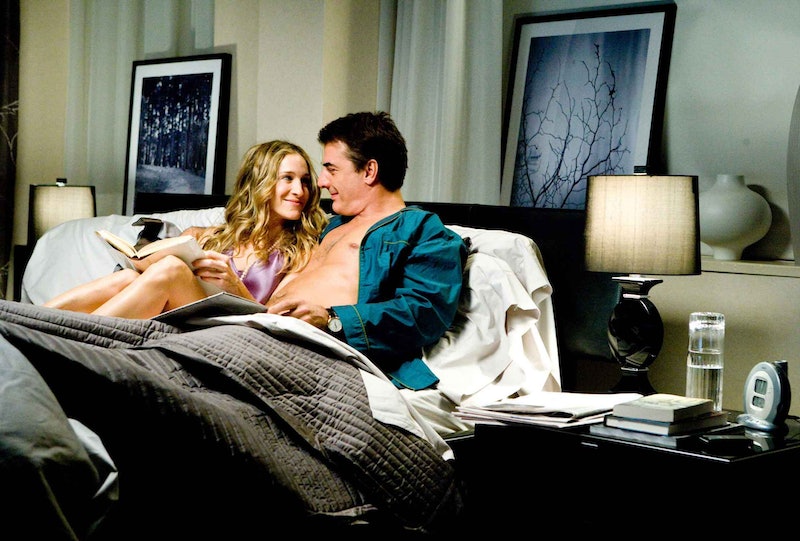 For a show that taught a generation of women many of their most formative lessons about life, love, and justifying shoe purchases that you really can't afford, Sex and the City gave a lot of bad advice — and there may have been no place where they were most off the mark than with sex. Not to knock all the positive advances the show made for pop culture explorations of female sexuality — who talked about anal sex on TV before Sex and the City ? Who talked about analingus after it? And would there have been that Broad City episode where Abbi pees out a condom without the episode where Carrie gets her diaphragm stuck inside her vagina? It made a big and very important mark.

And yet Carrie, Miranda, Charlotte, and Samantha often had their sexual values totally out of whack. They did things like rationalize cheating and made it through 20 years of sexual activity without ever getting tested. They got addicted to vibrators and used terms to describe their paramours that seemed hopelessly outdated just a few short years after the show aired ("gay straight man"? Seriously?).

So let's honor and respect the work of the Cosmo-swilling quartet, while also being honest about the boat loads of bad sex advice they put out. Because, you know, a lot of it was pretty awful.

EVIDENCE: "I only give head to get head!"— Miranda

Hey, no one should ever feel like they have to engage in sexual acts that they're not jazzed about — not because society thinks they should, not because their partner thinks they should, not for anything. But when you're engaging in your sexual decision-making process, it's probably best to make your call based on what you like doing, not what you think you can coax your partner into doing after you give them some some half-hearted head. P.S. Everyone can tell when you're performing a begrudging blow job, Miranda. Don't they teach that at Harvard?!!

Bad Lesson #2: Tell Someone You're Dumping Them Because Their Penis Is Too Small

EVIDENCE: "Your penis...is too small!"— Samantha

Everyone is entitled to their own deal breakers, and there's some evidence to back up penis size playing a key role in vaginal orgasms, so I won't argue that Samantha is completely in the wrong here. However, I will argue that most of the time, penis sizes don't directly correlate to a punchier orgasm, or even having an orgasm at all, and I will also note that, in a survey conducted by Men's Health, 60 percent of women didn't care about penis size. I'm not gonna tell you how to live your life, but I do think the whole "bigger penis is better penis" thing is pretty much all talk — the same way that it would be cool to, say, date someone who raced Formula One cars or owned their own planetarium, but it doesn't actually make any difference on a day-to-day level.

Also, a penis size–related dumping is probably one of the only times I would 100 percent advocate lying in a breakup. That shit's not being honest — it's just mean.

EVIDENCE: "Men who are good-looking are never good in bed because they never had to be." —Carrie

This sentiment runs perilously close to that whole "beautiful women never have good personalities because they don't have to" line of thinking that misogynist jag-offs are always trotting out. The great truth is that all kinds of people are awesome in bed, and the much sadder truth is that also all sorts of people are also horrible in bed. But trust me: there are plenty of un-good-looking people who have never bothered to get good at sex, too.

EVIDENCE: "Tell a man 'I hate you,' you have the best sex of your life."— Samantha

If I am wrong about this, please feel free to correct me, gentle readers — but I have never quite gotten what the deal is with hate sex. But given that I found an article in national print publication entitled "Hate Sex: How to Have It" while researching this article, clearly, people are fascinated by it.

Though I couldn't find any hard statistics about how many folks have had hate sex (people don't want to admit to having had hate sex when talking to statisticians! Imagine that!), I do have to wonder if this one is a masturbation fantasy that curdles once you expose it to real life. Alone in your boudoir, the idea of banging it out with some sexy rude guy has an air of classic Harlequin novel — like you're the heroine of The Rogue Who Loved Me. But in real life, it's hard enough to clearly communicate your sexual needs to people who like you; what odds do you have of getting off with, like, that handsome and cruel condominium developer who wants to turn your local forest preserve into a high-rise bank ATM?

EVIDENCE: "You can't date your fuck buddy.... You're going to take the only person in your life that's there purely for sex, no strings attached, and turn him into a human being? Why?" — Samantha

I know that we're supposed to take most of the stuff Samantha “Lawrence of my labia!” Jones says with a grain of salt, but this piece of bad advice gets around. Hey, if you think dating is a drag and are just into getting your junk pounded, that's more than fine. But the problems arise from people who think that serious relationships don't ever evolve out of hookups — that only folks who meet while dating and looking for a serious partner ever find one.

But a 2010 survey conducted by the University of Iowa found that just as many happy, high-quality serious relationships develop out of friends with benefits situations as they do from couples who were dating with an eye toward permanently mating. So keep a fuck buddy at arm's length if that's what you're into — but don't do it just because you think hooking up permanently marks your relationship with a scarlet "H" for "hookup" (or "hoor").

EVIDENCE: "Men don’t marry up-the-butt girl. Who ever heard of Mrs. Up-the-Butt? No, no, no. I can’t. I want children and nice bedding and I just can’t handle this right now.” — Charlotte

Okay, I know part of the charm of Charlotte is that she seems to have taken most of her ideas about life from a rowdy seventh-grade sleepover. And her theory is even shot down later in the series when two of her very own close friends become Mrs. Up-the-Butts themselves.

But just in case any of you were traumatized by this scene in a way that's hampered your own sexual exploration: According to a recent Kinsey Institute poll, 45 percent of young women have tried anal sex — and according to recent census information, more than 60 percent of all women get married at some point in their life. Crunch those numbers, and I am sure you will find that there are many, many Ms. and Mrs. Up-the-Butts out there (as well as many Mr. Up-the-Butts, though pondering that sort of thing surely would have caused sparks to fly out of Charlotte's impeccably coiffed head).

Bad Lesson #7: Bang Whoever You Want Until You've Said "I Love You"

EVIDENCE: "Until he says, 'I love you,' you're a free agent."— Samantha

Yeah, such a free agent that you LOST A DOG, CARRIE! But seriously, while I guess this could technically work —in that, if you haven't told someone that you love them, then maybe you don't love them, and thus maybe won't care when banging other people screws up your relationship — I think it's a lot to ask. Especially when the average relationship becomes exclusive after six to eight dates, but the average couple says "I love you" for the first time after 14 dates. You do you, sure —but sleeping with whoever until your partner says that they love you does kind of seem like a surefire way to never develop the intimacy needed to actually love each other (also, Carrie never really loved Aidan—but that rant goes on my secret LiveJournal, not here).

Bad Lesson #8: Have Sex With Your Bra On

EVIDENCE: Almost every sex scene in the entire series.Yeah, we've all kept our bra on during sex on occasion. Maybe things progressed too quickly for you to get it off in time. Maybe you're about to get your period and your boobs will hurt if they bounce around. Maybe you're just really excited about your very cute new bra. Whatever, I'm sure you had your reasons. But everybody (even Samantha sometimes) goes to the bone zone on the reg with not just a bra, but negligees, nightgowns, and the occasional slip dress. Are they chilly? Shy? Anticipating a fire drill? I believe that, in the field on "bra-on sexual relations," the show has most led America's youth astray. Take off your bras, people! Even if you're not into nipple play, don't your boobs just get crazy-sweaty in there?

Bad Lesson #9: Sometimes It's Fine To Fake It

EVIDENCE: "If you really like the guy, what's one little moment of 'ooh, ooh,' versus spending the whole night in bed alone ?"— Charlotte

Yeah, like I just said, half the appeal of Charlotte is that you just wanna grab her by the shoulders and give her a little shake. (Just a quick one!) But the show — and even this specific episode, which ends with Miranda throwing a pity fake O at a sexually inept doctor — never really seemed to firmly come down against the phenomenon of faking it 'cause you can't make it.

Which is a shame. Because a 2013 study by the University of Kansas found that 68 percent of women (and 28 percent of men) had faked an orgasm in order to not hurt a partner's feelings, create a sense of intimacy, or just move things along. Given those numbers, I really wish the show had been interested in showing how much fake orgasms ruin our sex lives. Because they are a surefire way to keep you from actually getting what you want in a long-term sexual relationship— and if you're faking in a short-term sexual relationship, well, what the hell are you doing?

More like this
The 19 Best Tweets & Memes About Bisexual Awareness Week
By Lexi Inks
Are Quality Time & Gift-Receiving Love Languages Compatible?
By Lexi Inks
The Differences Between Polyamory & Open Relationships
By Lexi Inks
10 Creative Sexting Ideas That Don't Involve Nudes
By Lexi Inks
Get Even More From Bustle — Sign Up For The Newsletter