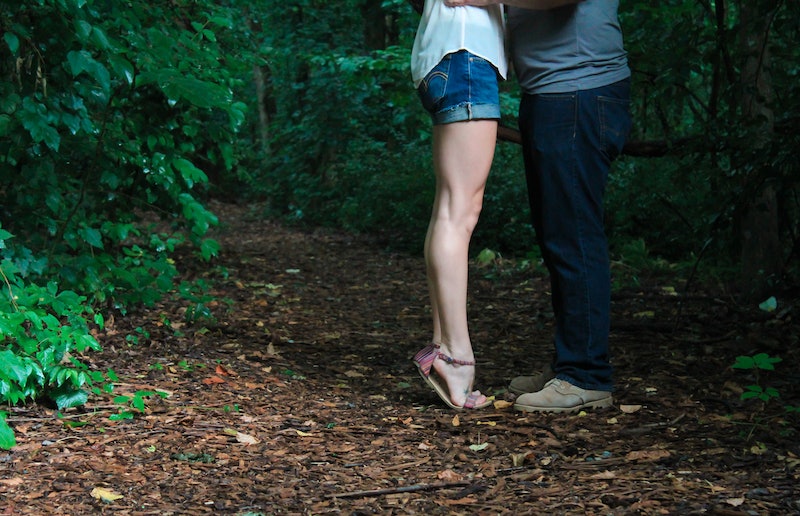 "We've taught girls to romanticize nearly everything a boy does," observes a recent post describing the many problematic gender stereotypes we romanticize from the Tumblr problackgirl. Certain gendered scripts for behavior are oftened portrayed as funny, cute, or romantic in the media — which wouldn't be as much of a problem if media existed in a vacuum. But it doesn't exist in a vacuum; it becomes part of our cultural landscape, and as it does so, it can lead us to excuse real-life sexism. And that? Is a huge problem.

Problackgirl describes all the damaging messages she has received about relationships:

When I was younger I thought it was cute that boys chased the girl even after she said "no." I loved it when after a girl moved away from a kiss, the guy would pull her back and force it on. I thought a guy saying "I won't take a 'no' for an answer" was passionate and romantic. We're literally always teaching girls to romanticize abusive traits.

Whether we're watching TV, reading romance novels, or browsing the greeting card aisle in the drugstore, we're bound to encounter the glorification of coercive men or other subtly sexist tropes, like the father who polices his daughter's body as a supposed expression of love and the woman who plays "coy" in order to give a man the "thrill of the chase."

Here are some problematically romanticized relationship tropes you've probably seen before and how they can have less-than-romantic consequences.

Although it's one of my favorite movies, Big Fish provides a textbook example of rewarding men for ignoring women when they say "no." Even after the protagonist's love interest makes it clear multiple times that she's engaged, he shows up at her house after planting her favorite flower all over her yard, announcing that he plans to marry her anyway. And it works: She's his wife by the end of the movie. Unfortunately, such plot points can lead men to think it's OK not to respect a woman's rejection. When this logic is applied to sexual scenarios, it constitutes assault — which is why the song "Baby, It's Cold Outside," in which a man convinces a woman to stay at his home after she repeatedly refuses, has been considered a date-rape anthem.

A woman with little sexual experience, a la Anastasia Steele, is often depicted as a commodity, as if she will "belong" to the first man to sleep with her. "Innocence" is considered an attractive trait, and being poorly versed in sex or romance is supposed to make a woman "charming." Though abstaining from sex is a valid choice in real life that says nothing about a woman's personality or character, "pure" women in the media are often depicted as naiive, incompetent, in need of a man to depend on, and easy to take advantage of, which makes the notion that men should be drawn to these women all the more problematic. After all, any man who seeks out a naiive woman is probably not looking for an equal.

3. The Guy Who Takes The Reigns

Speaking of Fifty Shades of Grey, this is pretty much Christian Grey's M.O. Dating conventions dictate that men must be "masculine" by making decisions for their dates and making all the first moves. Thus, men who don't even wait to figure out what women want and force them to do whatever they had in mind are considered the ideal of manhood. In Christian Grey's case, this desire to dominate becomes a form of abuse, as he physically controls and sometimes harms Ana without her consent, yet this is depicted in the book and movie as a turn-on.

Along with the idea that men must dominate women comes the prescription for women to be passive and feign disinterest so that men can have the "thrill of the chase." The less you speak up, ask for what you want, and let on that you want anything at all, the more interested he'll be, self-help books like He's Just Not That Into You teach women. We're also taught that this withholding of attention, affection, and sex gives women power — hence supposedly empowering underwear that says "access denied." This trope slut-shames women and objectifies them by telling them the more sex they have and the more interest they express, the less powerful they will be.

In one episode of Full House, Danny Tanner spies on DJ while she's watching a movie with her boyfriend — because what would a sitcom be without a loving father attempting to exert control over her daughter's love life? By behaving as if all romantic or sexual activity on a daughter's part is bad, fictional and real-life fathers teach women that the world is a dangerous place that they need to be protected from by men and that their bodies are not their own. Our culture treats it as a given that fathers are afraid to see their daughters dating, but dads who understand that it's normal and healthy for women to be sexual and don't assume everyone is objectifying their daughters (an assumption that objectifies girls in of itself) should want them to have freedom.

This one's a little like the guy who won't take "no" for an answer. The difference is that he does accept his love interest's rejection, but often begrudgingly, and he's rewarded for his patience by winning over the girl by the end. We've seen this with Penny and Lenny in The Big Bang Theory, Ross and Rachel in Friends, and even as children with Gordo and Lizzie in Lizzie McGuire. By presenting women as rewards for patience and kindness, this trope can validate Nice Guy Syndrome, an entitlement complex that leads some men to believe they deserve women's affections because they're so "nice" (though they're usually not).

When Edward Cullen confesses in Twilight that he has been sneaking into his girlfriend Bella's room and watching her sleep, we're supposed to view it as a sign of his devotion (and to excuse it because he's a nocturnal vampire and has nothing else to do while everyone else is sleeping... but no). We're also supposed to find songs like"Every Breath You Take," which literally describes watching somebody while they do every single thing they do, romantic. However, given that 76 percent of women who were murdered by intimate partners were stalked by them first, according to the National Center for Victims of Crime, stalking is definitely not something to romanticize.

8. The Damsel In Distress

This trope is as old as medieval chivalry, except its modern form looks more like Disney princesses and superheroes' love interests. Wherever we learn it, the cultural ideal states that the ability to physically save someone from danger (or, in everyday life, from the nuisance of opening a jar or carrying a suitcase) is an attractive quality in a man. Conversely, this implies that the woman in an ideal heterosexual relationship is lacking certain capabilities, giving the man the opportunity to step in and save or help her. It also implies that women should be smaller than men, which can create body image issues for both genders. Of course, saving someone from death is heroic and carrying things for them is nice, but that's exactly why we should encourage women to exhibit the same behavior, not to be weak so that they can have the imbalanced type of relationship that the media glorifies.