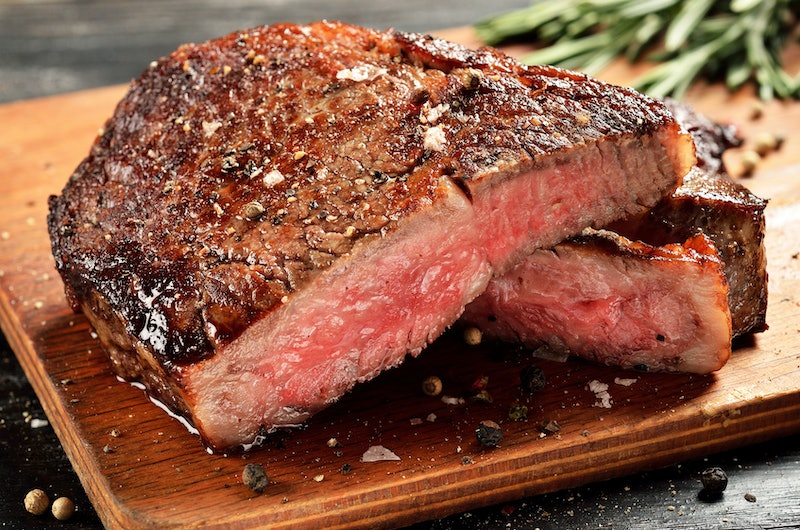 For as long as I can remember, I've been weirdly picky about meat — but I'm not really a vegetarian, either. My aversion to eating a lot of meat marked me as a giant weirdo back in the rural Midwest, but after researching what happens to your body when you eat meat I'm more than a little pleased at my weird, semi-vegetarian status. If you're not big on meat either, you should know that's actually a good thing, because a new study from the World Health Organization (WHO) claims that processed meat causes cancer.

Apparently, even consuming 50 grams of processed meat daily (that's about the equivalent of two slices of lunch meat) can increase cancer risk in humans by 18 percent. Additionally, processed meat has officially been classified as "carcinogenic to humans" — and unprocessed red meat may be as well. Evidently, while it is still said that red meat has some nutritional value, it appears that eating a lot of meat is not good for our health.

Eating excessive amounts of red meat have been linked to a myriad of health problems from an increased risk of colorectal cancer, hormone-sensitive breast cancer, diabetes, and Alzheimer's, to mental health issues such as depressive symptoms. Conversely, there's no denying that moderate consumption of meat (red or white) can provide your body with rich vitamins and nutrients such as B12 and protein.

Regardless of whether you eat lots of meat or very little, you should be aware of what eating meat can do to your body. Like almost everything else we put into our bodies, the key to meat consumption, should you choose to eat it, is learning how to practice moderation, and to obtain your meat as ethically as possible. Here are five things that happen to your body when you eat a lot of meat.

1. The Iron Levels In Your Brain Increase

Iron is good for us, and females in particular need plenty of iron to stay healthy. However, consuming excessive amounts of iron-rich meats can raise the iron levels in your brain to a dangerous point. According to a 2013 UCLA study, overly-high levels of iron in the brain can ultimately cause the development of Alzheimer's disease.

We all have a fatty tissue in our brains which is responsible for protecting the nerve fibers up there. It's called myelin, and research has shown that excessive amounts of iron in the brain can actually destroy it. When this happens, our brain communications are disrupted, and symptoms of Alzheimer's disease start to appear. So, while meat can be an excellent source of the iron you need, it's important not to overdo it, and to keep your iron levels in check. AKA, you probably shouldn't eat too much meat.

2. You Raise Your Risk Of Cancer

You probably already know that most of the animals we eat are pumped full of hormones which are meant to make them grow bigger and to do it faster than nature would normally allow. Incidentally, while this is not only animal cruelty in action, it's also harmful to those who consider themselves meat-eaters. Most commonly, livestock in the U.S. is full of estrogen and/or testosterone. (This is true of organic meat as well.) When you eat meat, your body ingests other potentially cancer-causing chemicals, hormones, and additives too.

In a study of over half a million people which was conducted by the the National Cancer Institute and published in 2009, it was found that those who consumed red meat daily were 30 percent more likely to die of any cause over a 10 year period than those who ate less of the stuff.

3. Your Immune System Gets A Boost

OK, so I had to have at least one positive item on this list about meat — because, the fact is, eating meat in moderation can be really good for you and your immune system.

As ABC news reported in their article about which foods are the best for boosting your immune system, eating beef in moderation can provide our bodies with the zinc they need to fight off infections. Zinc helps our bodies to develop white blood cells, and since these are the cells in charge of fending off foreign bacteria and viruses, it's crucial that you don't develop a deficiency of the mineral. That said, you can also get all the zinc you need from eating other non-animal products like nuts, oatmeal, and soy.

According to a study published in the journal Nature Medicine which included over 2,500 vegans, vegetarians, and omnivore cardiac patients, a compound found in red meat called carnitine has been shown to cause atherosclerosis. If you don't already know this, atherosclerosis is the hardening and clogging of the arteries, and it can lead to cardiovascular disease — which is the number one killer of Americans.

Evidently, the bacteria in our intestines converts the carnitine we get from red meat into trymethylamine-N-oxide, (TMAO) and this heart-damaging compound is ultimately what makes our blood vessels and arteries harden.

The mind and body are literally connected, and what we eat can seriously determine our mood, so it makes sense to talk about how eating meat can affect your mental state. In a study published in Nutrition Journal, which took a selection of 39 omnivores and split them up into three groups, researchers found that restricting meat can improve the mood of modern omnivores — at least in the short term. Of the three groups, the one that avoided eating meat altogether showed the highest improvement in mood scores at the end of the study, whereas the omnivores who continued to eat meat throughout the study showed no significant changes in their mood scores.

Whether you decide to cut back on your meat intake, stop eating meat for good, or this article hasn't compelled you to change your dietary habits at all, it's important to be educated about the effects that eating meat can have on your body. Consider simply restricting the amount of meat you eat each week, and definitely find out where your meat is coming from if you continue to rely on it as way to fuel your body.

More like this
The 5 Best SLS-Free Toothpastes, According To Dentists
By Amy Biggart and Danielle Calma
TikTok's Butter Board Might Be The New Cheese Plate
By Emma Carey
Deliveroo Is Selling Lotus Biscoff Cinnabons Now
By Darshita Goyal
10 Pumpkin Recipes That Are Way More Creative Than Pie & Lattes
By Rebecca Deczynski and Alexis Morillo
Get Even More From Bustle — Sign Up For The Newsletter