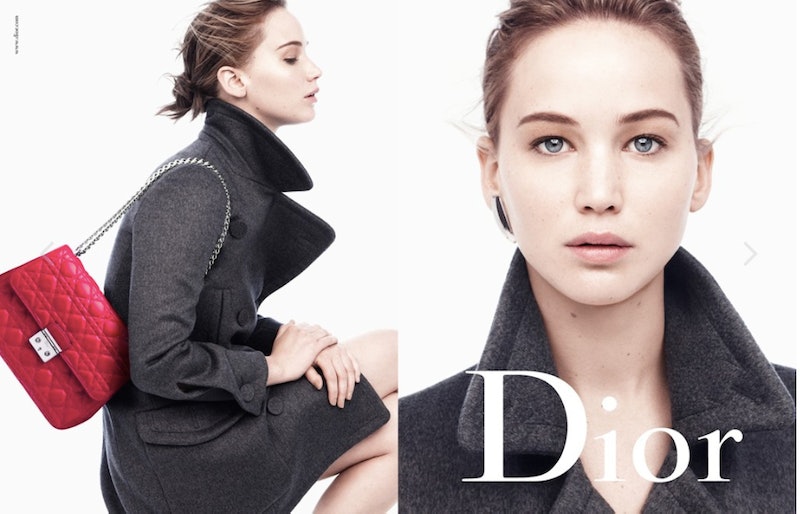 Strapless gowns, swept back hair, and photobombs galore: Dior couldn't find a more media-magnetic or beloved spokeswoman than J.Law, and evidently they know it. Page Six reports that Jennifer Lawrence is signing a multimillion-dollar deal with Dior, a brand she has worked with for the past two years. Her representation, CAA, is negotiating a three-year partnership with the Paris fashion house to the tune of $15 to $20 million.

Since she signed on after her first Hunger Games film, Lawrence has brought a carefree strength to Dior’s sensual softness. She began as a Dior spokeswoman in 2012, then appeared in the Miss Dior campaign soon after. Playing off of her natural beauty, the campaign took a minimalist approach, showing Lawrence front-on with her hair in a tousled bun.

Stylists often speak about making one feature stand out — a rosy cheek, a smoky eye, interesting cleavage. Lawrence will give us a deep red lip or a heavy lined eye to finish off her perfected simplicity with an edge. But her best feature? Her personality, which no doubt has played a role in sealing deals so grandiose.

Every A-list actress can look gorgeous in an ad, but few can cut off all her hair, fall up some stairs, and discuss her armpit fat without losing an ounce of elegance or sex appeal. Poised, alluring, and fun all at once, Lawrence exudes the opposite of the dead-eyed aloofness that are the staple of luxury ads. And Dior is betting the J.Law way sells better.

With past spokeswomen including Marion Cotillard, Natalie Portman, Charlize Theron and Mila Kunis, J.Law is still a fresh face to the fashion scene. By backing her, Dior continues to support unique and modern beauty.