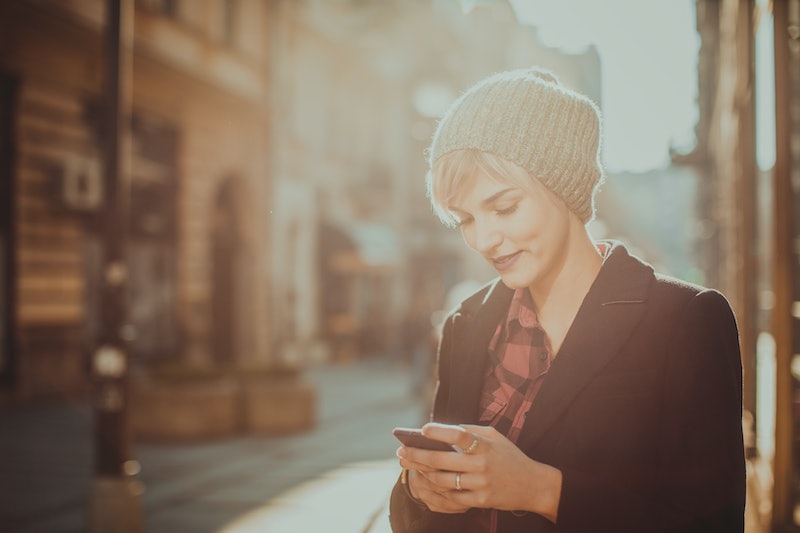 I'm a native New Yorker, born and raised — I grew up in the East Village, and I live in Brooklyn now, with many stops in between. When I was a kid, the internet was barely a thing yet, and also I was a kid, so I didn't spend a lot of time contemplating the best dating apps for New Yorkers. Let's all be thankful for that. These days, I don't spend much time on dating apps — something for which I am also grateful — but when I was single, I dabbled here and there, and let's be real: I would've dabbled more in apps had I been working with a more up-to-date smartphone. So this is all to say that I stuck with OkCupid.

But I've done some research, and I can tell you that some apps stand head and shoulders above the rest in terms of dating in New York, which is a difficult enough feat as it is. I can't promise that you'll suddenly start loving online dating on the mean streets of the Big Apple or fall in love instantly or whatever, but here are a few dating app options worth trying in New York City.

Exclusive to New York and L.A., Align dating app matches people based on horoscope compatibility. Since New York has over 8 million people — 1.5 million of which are never-married singles between 20 and 34 — it can feel a little random matching with someone based on mutual appreciation of each other's faces or haircuts or book collections. This'll find a Taurus for your Taurus, a Libra for your Aries. Much less random.

Available only in New York, Sweatt dating app matches New Yorkers who are really into working out with other New Yorkers who are equally into working out. If you're really, really into spinning class or yoga or Pilates or whatever, cruise this app for similarly minded folks. Seems fitting that it's only available in NYC, though I'm surprised L.A. doesn't have it yet. Don't worry: I'm sure it'll hit soon.

This app would be terrible in a tiny town, but New York is big enough for dating app Happn's genius to totally work. Basically, if you walk down the same street or take the same aboveground train or sit in the same coffee shop as someone else, you're matched with them. So if you see a supercute rando, you can repair thee to Happn posthaste to see if they, uh, happen to have Happn too.

New Yorkers are notorious Instagrammers, and Glimpse dating app is a good way to go if you're among their ranks. Flip through people's profiles, which are mostly populated with photos from their Instagrams; if you like someone, smile, and they'll be notified. If they smile back, you can exchange messages.

Though its tagline — "Connecting those with beards with those who want to stroke beards" — is a little gag-inducing, its premise is strong in the lumberjack-y world of NYC men's fashion. If every time you stroll through Williamsburg, you want desperately to stroke all of those fancy, well-groomed beards, see if you can find a willing party on dating app Bristlr.

On dating app Hinge, you meet through friends, though not in the strictest sense of the term: Hinge connects you only with people who are Facebook friends of friends (and third-degree connections), so everyone who pops up as a match is not technically a stranger. In a huge city like New York, especially if you have a lot of FB friends, this could be rather lucrative on the dating front.

Since NYC is so densely populated, and it can feel totally overwhelming to riffle through match after match in a deranged search for love, Coffee Meets Bagel might be a good option if you're looking for simplicity: Every day at noon, you get one match. If you're not feeling your match, you can say no, and provide feedback to help ensure that your next match will be a little more your style. Easy.

Like Tinder, Bumble dating app allows you to swipe left or right; if you right-swipe, and your crush does too, you have the option of sending them a message. But if you're into dudes, they don't have the option of sending you a message, which eliminates the whole "should-I-message-him-first" question. If you're into chicks, this is basically just like Tinder, except with a more girl-power vibe.

Speaking of Tinder, I would be remiss to omit good ol' Tinder, the dating app that launched a thousand apps. You know what it is. You know how to use it. If you live in NYC, you can literally go out with someone new every single night for the rest of your life. Sounds like my version of living hell, but you get the idea.

And I would be remiss if I left out OkCupid, too. OkCupid is hit or miss, but with about a zillion profiles in New York alone, you'll have your pick of possibilities. It's a pretty date-oriented site, so use the opportunity to meet someone at one of the city's thousands of cultural possibilities and kill two … pigeons with one stone. Not literally.