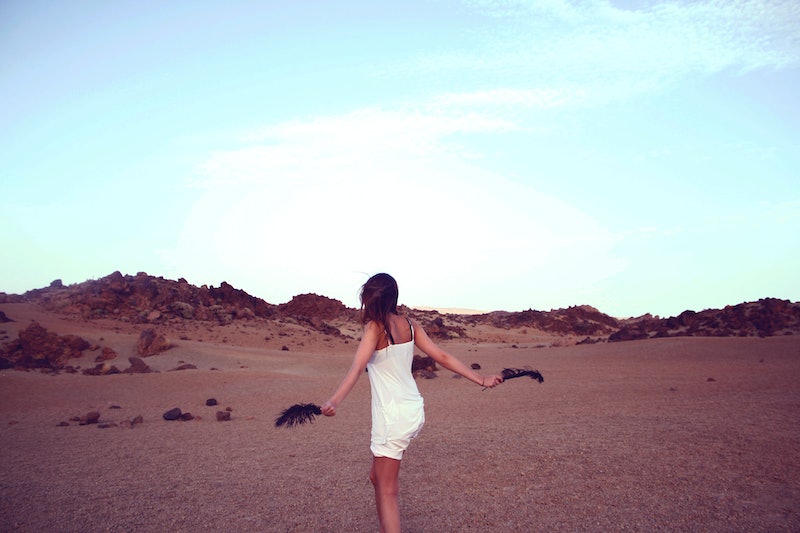 Hip astrologer Mecca doesn't mince her words in regard to what you need to know about sex with an Aries: "I once had an Aries man slap me in the middle the very first time we did it," she says. "No pre-discussion or build up to it. Just — pow. But he was hot though!" LOL @ this. But in all seriousness, the Aries lover is nothing if not feisty. If you're an Aries, you can use your knowledge about this for good, not evil: Your energetic, anytime/anywhere attitude about sex is perfect for a lover as indefatigable as you are, Mecca says. And if you're dating an Aries, get ready for lots of sex.

Mecca, founder of astro-coaching practice My Life Created and a writer, filmmaker and transformation coach, knows her stuff as far as the stars. She has plenty to say about the bedroom practices of spirited Aries, and she's quick to underline their gutsiness in and out of the bedroom. Specifically, never hesitate to make the first move, whether it's asking for a date or telling your partner exactly what you want. Aries are confident as hell, and they shouldn't apologize for or have any qualms about this sexy quality. Instead, use that confidence to get what you want — namely, rough and exhibitionist sex, a pair of handcuffs, and possibly a Libra, Mecca says.

The bedroom is an arena in which anything goes, Mecca says: "Aries is a fire sign, ruled by Mars, which makes them very passionate and bold. Mars is known as the God of War, which means that for Aries, arguing is foreplay." If you're an Aries, or if you're going to bed with one, pleasure is pain. "Rough sex — slapping, hair pulling, etc. — turns them on, because Mars energy is aggressive," Mecca tells me.

2. Channel Your Selfishness Into Better Sex

Aries can be, well, a little infantile, says Mecca. "Because they're considered to be the babies of the Zodiac (they're first in line), Aries can also be kind of selfish in bed, or want something that's going to get them off quickly. This can be a plus or a minus, depending on how their lover likes their sex." If you can find someone who's as wham, bam, thank you, ma'am as you are about sex, you've got it made. "They're also the Energizer Bunnies of sex, which means they have to be with a lover who not only enjoys sex, but wants it all the time."

In other words, Aries may have some self-serving qualities, but they can harness (pun intended) that aggressive — and insatiable — energy into having lots of intense sex.

Slip into the bathroom at the bar or keep the blinds open for some classic Aries sex. "Because of their fiery nature and big egos, Aries would be into exhibitionism or public sex — something where they get to show off their goods/prowess," says Mecca. And don't forget the dirty talk — and screams and squeals. "They also have pretty big mouths, so a lover should be comfortable with someone who talks shit in bed. Bonus points to the lover who is just as loud. Even more points to the lover who tells them how amazing they are to boot." Self-centered Aries likes her ego stroked — among other things, perhaps. "The body part that Aries rules is the head, so stroking their head/hair is definitely a turn-on, and can sometimes be a good tactic to calm them down. If that fails, just get naked!" Duly noted.

4. Don't Forget The Toys In Bed

"As for the arrogant Aries, give them a mirror to have sex with," Mecca says. "No, no, I kid. But maybe try some bondage rope (which has a smoother touch than traditional rope) and let them tie you up. Or, if they're down for it, try teasing them with feathers or a pinwheel (a metal toy that moves as your bring it across the skin). More than likely, they'll love a bit of torture and power play." Sounds like a fun night.

The sky's the limit, Mecca adds: "Aries need to constantly test the limits or push the envelope when it comes to anything they do, so they need to experiment and try new things in bed. The downside to this is that they also get bored easily, which could burn out a more low-key lover. The women are just as dominant as the men, so they may be inclined to don a strap on and bend over their partner."

Don't shilly-shally — ask that hottie out, Mecca says. "Aries is a masculine fire sign, so oftentimes women born under this sign have no qualms about making the first move. This can be off-putting to people who believe in men making the first move, but an Aries woman needs to be dominant and she needs an enthusiastic, willing partner to feed her fire." So flounce up to your next conquest and be bold enough to ask them what they're doing later. "Confidence is definitely an aphrodisiac. I would definitely advise an Aries woman to run the other way if she comes across a man who's put off or threatened by her confidence/prowess."

Of all possible sexploits, "a Libra partner would be ideal for them, being gracious enough to make Aries feel hot and almighty while teaching Aries the importance of being giving and thoughtful to a partner in bed. Plus as an air sign, Libra would be able to keep up with Aries' short attention span." If now you're on the prowl for a Libra, perhaps try Align instead of Tinder to "swipe right" on such a match.