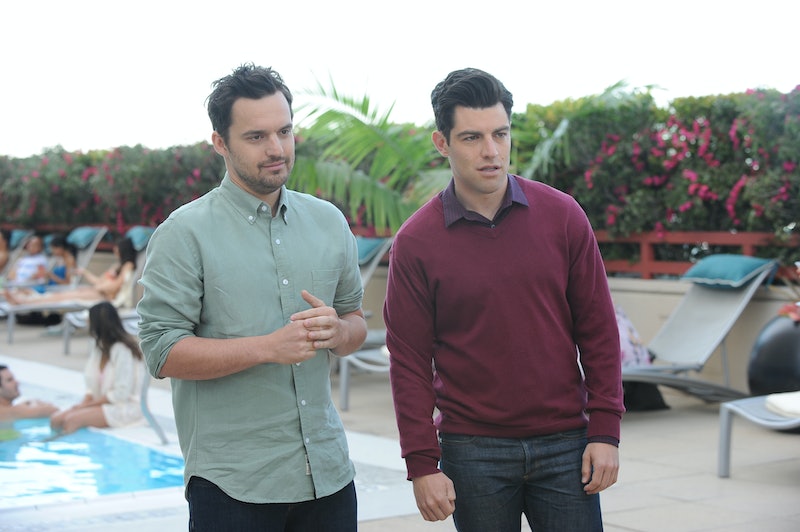 New Girl has created some truly amazing relationships over the last five seasons. But whether you're a diehard supporter of Schmidt and Cece or Nick and Jess, I think there's one love story on this series that's proven to be a cut above the rest. I'm, of course, talking about the bromance that exists between New Girl 's Schmidt and Nick. While the majority of Tuesday night's episode, titled "No Girl," focused on watching the gang struggle with Jess' absence thanks to jury duty, it also gave the characters a chance to shine without their main star and highlighted the strong bonds that they share with or without Miss Day. And Nick and Schmidt's friendship proved to be no exception.

It's easy to forget just how far back their friendship goes, but it existed long before the likes of Jess and Cece ever became apart of their lives. That's one of the reasons why Nick was so passionate about planning Schmidt's bachelor party all by himself and without the likes of their annoying friend Todd (who is pretty much the WORST aside from having a ton of money). So to prove just how capable he is of giving Schmidt the bachelor party of his dreams, Nick decides that they'll go to Tokyo. The only problem is it's going to cost them $9,000. And if you know anything about Nick Miller it's that he does not have that kind of money just lying around. So they team up and decide to turn the loft into a Airbnb.

As you can imagine the plan didn't work out as smoothly as they had envisioned, which led to them contacting Todd for some financial support. In fact, Nick was even willing to receive a "nut slap" from Todd if it meant getting Schmidt to Tokyo. But in the end, Schmidt couldn't bear to see his friend go through that kind of humiliation. He realized they don't need Todd or his money or even the fancy trip, because his bachelor party was going to be great regardless with Nick at the helm. You could tell it meant a lot to Nick to hear Schmidt that and it made their friendship all the more stronger because of it.

So many times we get so caught up in the romance of things that it can sometimes be easy to overlook the fact that the friendships on this show are the most important love stories of all. I mean, here are two guys that couldn't be more different if they tried, and yet they're there for each other time and time again. It's a refreshing notion and one that I hope continues to get fully explored between all the characters throughout Jess' departure.

More like this
Twitter Is In Tears After *That* Jack & Randall Parallel On 'This Is Us'
By Grace Wehniainen
The 'This Is Us' Finale Featured An Adorable Season 1 Jack & Rebecca Easter Egg
By Grace Wehniainen
Britney Spears Met The Weeknd & Sam Levinson, So She May Actually Be On 'The Idol'
By Jake Viswanath
'Obi-Wan Kenobi' Takes Place After This Key Star Wars Movie
By Arya Roshanian
Get Even More From Bustle — Sign Up For The Newsletter