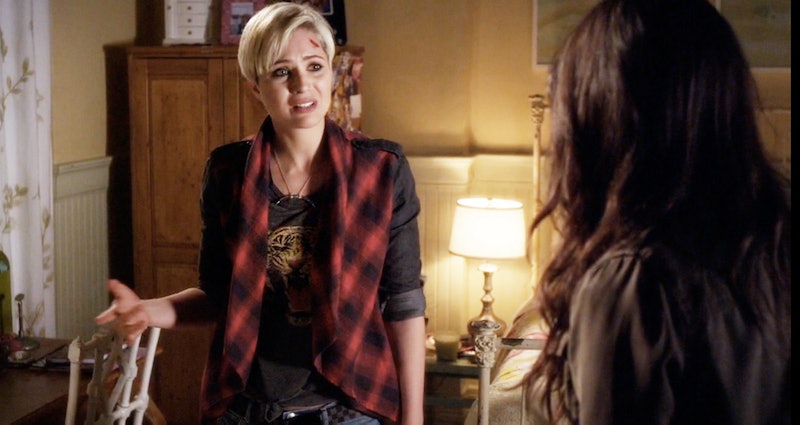 Will there ever be a valid reason to keep Sara Harvey in Rosewood? After showing up for Charlotte's funeral, Sara's been skulking around for the past three weeks creeping everyone out and now we finally know why. In the first episode, Season 6b hinted that the Liars were hiding something that they "did" to Sara and it turns out that it's what the didn't do is what they feel guilty for. In the Season 6a finale, Sara Harvey got electrocuted on Pretty Little Liars BY ACCIDENT and, because they couldn't, the Liars didn't help her. I guess Janel Parrish tweeted the truth last Tuesday after all.

We learned during last Tuesday's episode that Sara's hands had been burned, but we weren't entirely sure how or why — just whatever happened to her happened the night of the prom and that Liars felt responsible. But, really, there was nothing they could've done. After Emily punched Sara for secretly terrorizing them after they escaped the Dollhouse, Sara fell to the ground and when she tried to get up, she put her hands on a live electrical box. In a flashback, we saw the girls almost go help her before Ali told them that they couldn't because they'd end up getting electrocuted too. And that was it.

But, while I'm glad that the Liars learned from their mistakes with "The Jenna Thing," this reveal was really kind of a letdown. It was built up so much and we had to care so much about it that it almost seems like I. Marlene King was trying to distract us from something else. Or maybe I'm just crazy after only three weeks back in Rosewood.

For more on Sara Harvey's creepiness and everything elsePLL, check out Bustle's podcast Taking This One To The Grave.