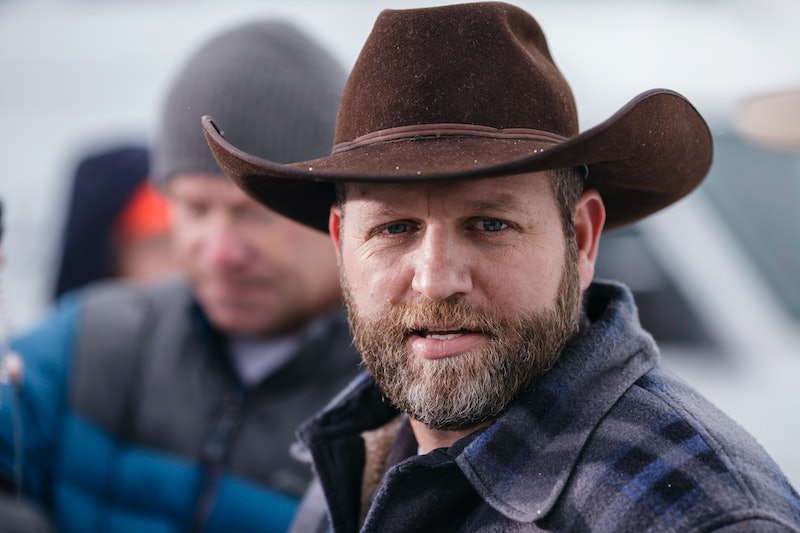 On Tuesday, federal authorities arrested Ammon Bundy, and at least five others after shots were fired. It remains unclear who fired first, but one person reportedly died during the shootout.

The arrests were made along Highway 395 after the group was stopped while heading to a community meeting more than 100 miles away from the Malheur wildlife refuge, which they have occupied over the last month. Ammon, 40; Ryan Bundy, 43; Brian Cavalier, 44; Shawna Cox, 59; and Ryan Payne, 32, are in custody and face felony charges of conspiracy to impede federal officers.

Authorities have not released information regarding the person who was killed, though the individual is reportedly an associate of the militia and the subject of a federal probable cause arrest.

FBI officials described the shootout as "an enforcement action to bring into custody a number of individuals associated with the armed occupation of the Malheur National Wildlife Refuge." Separately, the FBI arrested Joe O'Shaughnessy, 45, and Pete Santilli, 50 — both supporters of the militia's occupation. They face the same felony charges as the above listed individuals.

The armed militia has been occupying an Oregon wildlife refuge for 25 days. Bundy's group took over the land on Jan. 2 in protest of federal government oversight and two ranchers' arrests after allegedly setting fire to federal land in Harney County.

Cliven Bundy, Ammon's father, first made national news in 2014 during his own standoff with federal authorities at his ranch in Nevada, after refusing to pay fees for his cattle for over a decade. He told the Guardian on Tuesday, "My sons are good people and they were there to help. ... It's a rotten shame that people there are not trying to harm anybody and now they are shooting them dead."