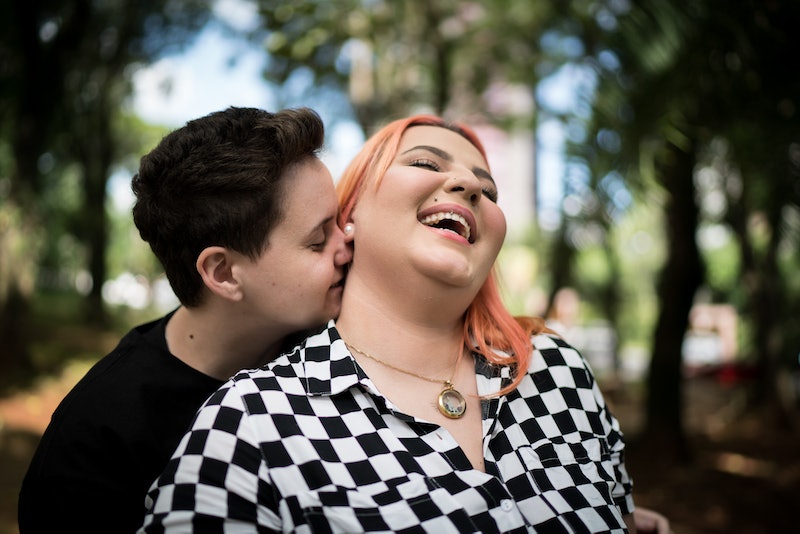 Valentine's Day is just around the corner, and whether we like it or not, so is the beginning of engagement season. For some, this is a signal to deactivate any and all social media accounts until the storm of happy couples has passed; for others, it's time to break out the Pinterest board for wedding tips — specifically, wedding tips for same-sex couples. Although it may feel much longer, same-sex marriage was legalized just last June, and this Valentine's Day marks the first celebration of the holiday since marriage equality passed. In the months since, it's become apparent that the etiquette for same-sex marriage is still unclear in some areas, especially considering that most wedding traditions rely on, well, tradition.

Of course, you can always go the "fake it 'til you make it" route, in which you tackle the obstacles as they appear. However, if there's anything I've learned in my various and sundry stints as a bridesmaid, it's that planning a wedding is so stressful that it can take even the most level-headed couple and turn them into a two-headed monster weirdly obsessed with flowery centerpieces. Furthermore, that stress is compounded when you're planning a wedding for two brides or two grooms. How do you decide who walks down the aisle? Should your dresses or suits match aesthetically? What if you're too matchy-matchy?

These questions and more tend to pop up in the process of planning a same-sex wedding, and it can be overwhelming to contemplate answering them all on your own. Fortunately, that's where author and etiquette columnist Steven Petrow, the Hilton’s Modern Manners Expert, comes in. I recently had the chance to chat with him about (almost) everything you need to know to plan a same-sex wedding in the wake of marriage equality, so let's take a look at five of his best wedding tips below.

1. Focus On Your Traditions, Not Society's

It differs for every couple, of course, but traditionally, different-sex couples can fall back on gender norms to figure out things like who proposes and who walks down the aisle, if that's the way they roll. LGBTQ couples don't have these scripts to follow, however, which can make the wedding planning process complicated. However, Petrow emphasizes focusing on what works for a couple rather than trying to fit into societal expectations for a wedding.

"There's no rule... It's kind of establishing a new norm," he says. Some couples may walk down the aisle together; others may choose not to walk down an aisle at all. In the end, what matters is what the couple wants in a ceremony, not what society expects.

Same-sex marriage may be legal, but that doesn't erase homophobia. Last year, an Oregon bakery made headlines for refusing to make a wedding cake for a lesbian couple, and in 2014, a similar situation occurred in Ireland. Of course, other companies have made huge strides in supporting marriage equality; in fact, Petrow said that some allowed for same-sex wedding registries before legalization even occurred.

However, even today not everyone is accepting of same-sex couples, so it's hugely important to make sure you're using LGBTQ-friendly bakers, officiants, and the like. (Fortunately, there are websites in place to help locate vendors that support same-sex marriage.) "It's really important for people working at your wedding to support you," Petrow says.

3. Make Absolutely Sure You're Out To The Important Guests

It sounds like a no-brainer, but it's never a good idea to assume someone knows you're LGBT. Don't leave it up to word of mouth to come out to the important guests; your wedding day probably isn't the best time for your grandmother who's never heard of Facebook to realize that your fiancée Erin is a woman and not a man.

"With close friends and with family members, you want to do that in the form of a conversation," Petrow says.

4. Be Sure Of Legalities

Although same-sex marriage has been legalized across the United States, unfortunately some lawmakers have found ways to work around it, largely through religious exemption laws. The idea is that couples can always drive to a county with no exemptions to get married, but as Petrow points out, that can entail some serious traveling. In short, double-checking the legalities should be first on your to-do list.

Petrow points out that he characterizes same-sex couples into two groups based on generation. The first generation is comprised of older couples who tend to place less emphasis on the ceremony and more on the fact that they can get married at all. "After being together for a while, they said their vows and kind of went on with their business," he says. The younger generation, on the other hand, tends to focus on the traditional ceremony, and that's where many of the aforementioned obstacles arise.

Of course, they're absolutely worth it if you want a traditional wedding. However, don't let the fact that you can have a gigantic, Royal Wedding-style ceremony pressure you into having one if you'd rather keep it small. "It's a period of time to figure out what is right for a particular couple," Petrow explains.

The bottom line? Whatever makes you and your partner happy is the right way to go. You do you, boo boo.