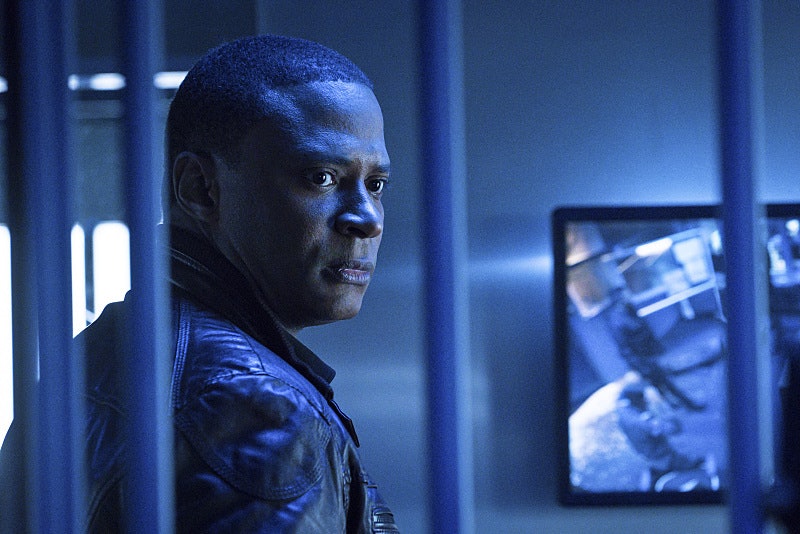 As relieved as all of us were to discover that Felicity was alive and on the mend during the Arrow midseason premiere, there's still a looming question hanging over our heads: who's in the grave in the Arrow flash forward? We can now rule Felicity out as one of the prime suspects (thank goodness!), but that means another beloved character will be heading to the chopping block — but who? In light of the latest future glimpse we were given during last Wednesday's episode, I'm starting to grow more concerned than ever that Diggle will be the one to die and end up in that fateful cemetery that's been haunting our nightmares ever since the Season 4 premiere.

We know that this person has to be someone that Oliver deeply cares about, but given that Oliver cares about all of the show's core characters that didn't exact narrow down the playing field. So what's changed? When Oliver walked away from the mystery tombstone and climbed into the limo with Felicity, that told us multiple things: a.) that she's still alive, b.) the two of them are no longer engaged, given her lack of a ring, and c.) the deceased is also someone who means a lot to Felicity as well. And while I'm sure Felicity likes Laurel and Thea just fine, there's only one person I can think of whose death would bring her that level of remorse: John Diggle.

These two have always shared a special bond since pretty much Day 1, so I can picture what his death would do to her emotionally. And while I would normally characterize Felicity as a non-violent person, she straight-out tells Oliver that he needs to kill the person responsible for this: "You know what you have to do. You've got to kill this son of a b*tch." For her to push Oliver back into killing proves just how monumental this loss is on her. Diggle has always been protective over her, so it would make sense that she'd want his death to be avenged by any means necessary.

Even David Ramsey, who plays Diggle, recently admitted to TVGuide.com that he fears he's one of the top grave suspects, given Felicity's hostile reaction. "To get her to say that would have to be a very, very meaningful death," he explained. "So, it has to be someone closer to the team. And I hate to say it but, you know, I'm right there. I'm on the chopping block." That doesn't exactly put my mind at ease. In truth, I don't want to see any of these characters go, but losing Diggle would be an especially difficult blow. So let's just all hope that this is a red herring and nothing more. Please?!?!