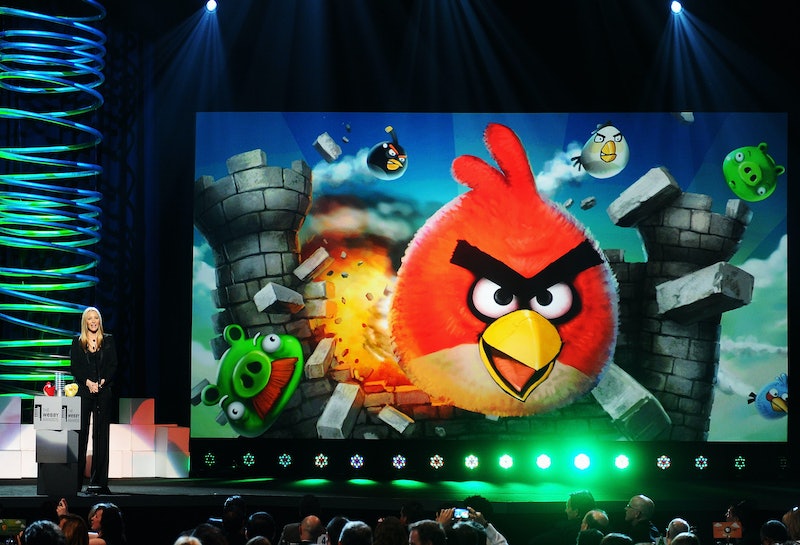 Edward Snowden strikes again — and this time, he's coming for Angry Birds. A collaborative investigative effort by the New York Times, former NSA contractor Snowden, and ProPublica has revealed that Britain and America's national security agencies have been mining smartphone apps for personal data since 2007. The earliest apps introduced to cellphones, like 2009's Angry Birds, are at the highest risk for app-mining by the NSA, and the agencies vacuum up data including — deep breath — "home country, current location, age, gender, zip code, martial status ... income, ethnicity, sexual orientation, education level, and number of children."

And it's not just games like Angry Birds, but the mobile versions of your Facebook profile, LinkedIn page, Flickr photos, Twitter account — you name it. The agencies zone in on particularly "leaky" apps, but it's not clear from the documents exactly how widely this data is collected, or precisely where from. The new information piggybacks on previous leaks that revealed the NSA is entirely capable of interpreting text messages, metadata, contact lists and other forms of Internet communication, and routinely exercises this capability.

The leak comes at a pivotal time for President Obama, whose State of the Union address on Tuesday will present his legislative agenda for 2014. Earlier this month, Obama announced new restrictions on the NSA's capabilities, particularly in terms of metadata, but did not address the issue of "leaky apps" and the information vacuumed up by security agencies. Probably because we didn't then know that our Angry Bird buddies are spying on us, too.

So these new revelations provide a new facet of the issue for the president and Congress to address (or ignore), even as most Americans remain pessimistic that the government's decision-making will be halfway decent this year, according to a recent Washington Post/ABC News poll.

It's not exactly surprising. The leaked documents aren't subtle.

What can we get?! Obama is going to have a hell of a time talking his way out of this one.

Said the NSA in response to the leaks, somewhat vaguely: "N.S.A. does not profile everyday Americans as it carries out its foreign intelligence mission... Because some data of U.S. persons may at times be incidentally collected in N.S.A.'s lawful foreign intelligence mission, privacy protections for U.S. persons exist across the entire process.” The British government, which has collaborated in the app-mining for six years, said even less — except that their actions are in compliance with British law.

These leaks make clear that the growing shift from desktop computers to mobile devices are actually helpful for the collection of this sort of data. But tablet makers need not quake in their boots: at this point, how much expectation of privacy do we have left, anyway? Seems like there's a new erosion of privacy every week.

More like this
President Zelensky Spoke Out On Ukraine's Chances Of Hosting Eurovision Next Year
By Sam Ramsden
How To Protect Your Digital Privacy If You Need An Abortion Post Roe v. Wade
By Kaitlyn Wylde
10 Times Diana & Meghan Spoke Similarly On The Royal Family
By Sophie McEvoy
How The City Healed Five Years On From The Manchester Arena Attack
By Ella Glover
Get Even More From Bustle — Sign Up For The Newsletter