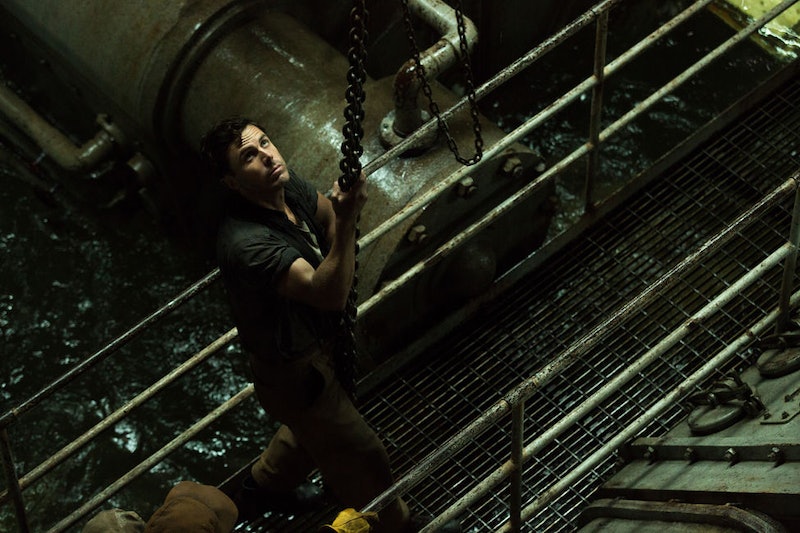 Disney's newest drama, The Finest Hours, is the first big hero story to hit the big screen in 2016. The movie, which stars Chris Pine, Casey Affleck and Ben Foster, depicts what the trailer dubs "the most daring rescue mission in U.S. Coast Guard history." Sounds legit, but multiple trailers have publicized the film as two different movies: one, a romance between a young member of the Coast Guard and a plucky girl who dares break gender norms; the other, an action thriller about a crew's struggle to survive after their ship breaks in two. Whether the movie turns out to be an epic rescue movie or a romantic drama, one question remains: is The Finest Hours based on a true story?

The Finest Hours is based on the true story of two oil tankers, the Pendleton and the Fort Mercer, that split in two during a storm off the coast of Massachusetts in 1952. In the midst of 60-foot waves and volatile tides, Chief Engineer of the Pendleton, Raymond Sybert, found himself in charge of 32 surviving crew members on one half of the tanker — Sybert is played by Affleck in the film. Sybert managed to keep his crew alive until (spoiler alert) a rescue came in the form of a hand full of Coast Guard volunteers on a tiny, 36-foot boat, equipped with life jackets and a compass. The volunteer crew, led by Bernie Webber (Pine), included Richard Livesey (Foster), Andy Fitzgerald (Kyle Gallner) and Ervin Maske (John Magaro), and successfully saved all 32 survivors on the Pendleton, all according to the U.S. Coast Guard.

Behind the scenes on The Finest Hours , filmmakers worked hard to make the movie as authentic as possible. This effort meant inviting the last surviving member of the rescue team, Andy Fitzgerald, to set. Now 83, Fitzgerald told the Boston Globe that he doesn't consider himself a hero, even though he and his fellow rescuers received the Gold Life-Saving Medal for their work in 1952. "The motto of the Coast Guard at that time was, 'You have to go out, but you don't have to come back.' It was our job," he said while on set. Also involved with the making of the film were Casey Sherman and Michael J. Tougias, who wrote about the daring rescue in their book, The Finest Hours, upon which the movie is based.

The Finest Hours might be based on a true story and a real life rescue, but there are a few things that were changed for the film. Most notably, the role of Bernie Webber's girlfriend, Miriam. In the film, Miriam, as played by Holliday Grainger, appears to be engaged to Bernie at the time of the rescue. In the trailer, she is seen as storming into the Coast Guard base and demanding the safe return of her fiancé. In reality, Miriam and Webber were married at the time of the rescue, and she spent the entire ordeal at home sick. No doubt the writers thought the engagement was best to bolster the one female role in the movie — not a bad idea given the desire for more female roles on film.