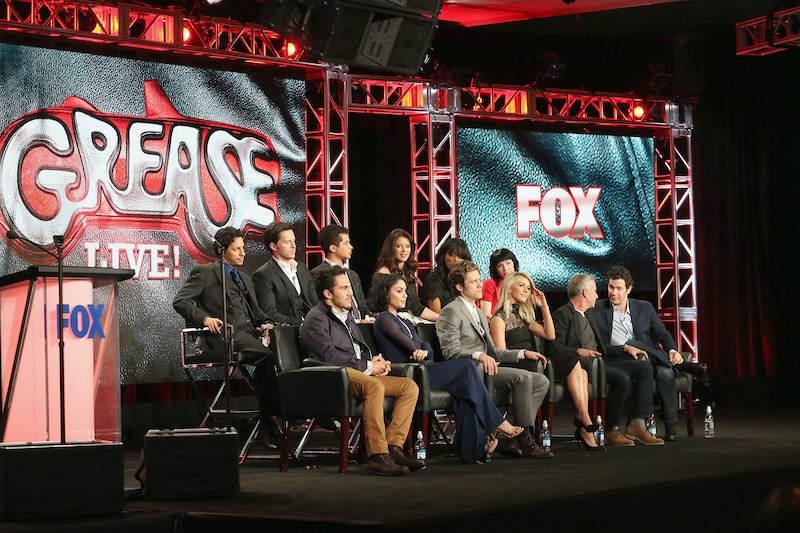 Grease Live! is happening Sunday, January 31 live on FOX. Unless you are a heartless robot — or not into musicals — you will likely be interested in tuning into FOX to see the good ol' gang from Rydell High back together again. Stars like Julianne Hough, Vanessa Hudgens, and Keke Palmer will have some large shoes to fill when the time comes, and I have no doubt they're up to the challenge. With all the hype surrounding the show, there are still a lot of questions being asked about Grease Live!, though — like what exactly will be going down when the cast hits the stage Sunday night.

From the music that will be on the show to who will be making cameos, there is still so much to unpack before the show airs. The excitement of live television — and the fact that it's still Grease— should be enough to draw fans in and keep them. Also, John Travolta has already given his blessing to Aaron Tveit, who will be taking the role of Danny Zuko. Regardless, this show has been getting a lot of traction, and fans are expectant. Although a lot of the mystery behind the production will be revealed on Sunday, here's what we know about the show so far:

Nope! Staying true to form, all of the songs will be sung on stage in real time. This means that anything can happen! The cast should all do a great job, too, since they all come from some sort of musical background. If their version of "Grease is the Word" with Jessie J is any indication (see above), the singing is going to be flawless.

Who Is Aaron Tveit?

Other names like Julianne Hough and Vanessa Hudgens seem to be recognizable for most people right away, but a lot of fans may still be wondering: Who is Aaron Tveit? Well, he is a pretty big deal in the theatre world. Tveit has starred in plays like Hairspray, Wicked, and Next to Normal, and has an incredible voice to boast. However, he is also no stranger to television and film. He recently starred in the USA series Graceland, which was sadly canceled after only three seasons, and he's also appeared in Gossip Girl. So, Grease Live! will be a great blend of some of his best talents.

Any Exciting Cameos To Look Forward To?

Why, yes, I'm glad you asked. There are actually a ton of exciting cameos to look forward to: A ton of famous faces have been added to the line up. Barry Pearl and Didi Conn — the original Doody and Frenchy — will be making a small appearance, but my personal favorite is Boyz II Men, who will be playing Teen Angels. Joe Jonas' new band DNCE is also expected to make an appearance as well, so they are holding nothing back.

There are so many questions to answer when Grease Live! hits the small screen this Sunday, but I don't want to spoil it all. Make sure to check it out on FOX this weekend!