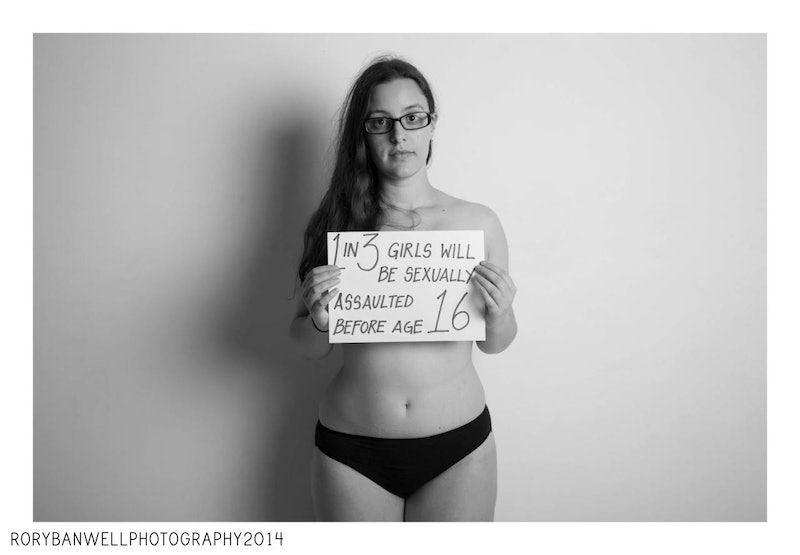 An Australian photographer by the name of Rory Banwell is sending a powerful message about rape culture through her black-and-white photo series, Still Not Asking For It. The project — which poignantly showcases women and men standing topless, some holding signs, some with black tape covering their nipples, and some with an arm across their chests, but all with messages scrawled across their bodies — aims to raise awareness about consent and shine light on sexual assault and the largely unspoken-of epidemic of violence against women. And while the series stems from Banwell's passion for social advocacy, it was also born from a personal place: the intrinsic need, as parents, to make the world a better place for the children we bring into it.

"The project was inspired when my husband and I found we were going to have a girl. Someone actually said to Alex, 'Time to buy a gun,' and we were so disappointed that people's initial reactions were that we would need to protect her, purely because of her gender," Banwell tells Bustle via email. "I was so taken aback by this sentiment that I decided I needed to do 'something.' Being a photographer, I knew that I could use this medium to accomplish my something, and so Still Not Asking For It was born."

"The original inspiration for the type of photo — topless and with tape covering their nipples — came from a photo I saw of a woman, Ashley, at Slut Walk in Chicago with tape over her nipples and the words 'Still Not Asking For It' written on her stomach in Sharpie," Banwell explains. "I liked the idea that regardless of what anyone is wearing, there is no excuse, no justification, and no invitation for someone to sexually assault them. I decided that by emulating her original photograph, I could create a powerful message and collection of photographs." Although many of the photos follow this basic format, there are also variations on the theme: signs held up, or arms crossing chests.

Since its initial publication in November 2015 (the project is ongoing), Banwell's photo series has been circulated widely, receiving a recent wave of publicity and réclame. Sadly, though (and far sadder still, somewhat unsurprisingly), the stirring series has also elicited a rash of negative remarks. "Every time someone leaves a comment saying 'No one would want to rape you anyway' or 'Have an abortion then' or 'That statistic isn't true,' etc., it just proves how much the project is needed," she shares with Bustle.

"Many people don't realize the irony of their comments on a project that is aimed to stop the propagation of rape culture. It has been really disappointing seeing so many men and women who have these extreme and disturbing views and are completely not bothered by writing them on such a public forum," Banwell continues. "They know there are no repercussions for their actions, and that they think they can say whatever they want on Facebook without really caring about who they are affecting or hurting."

Of course, as Banwell points out, such comments are stark examples of how insidious rape culture is in our society. To their credit, the subjects of Banwell's series — a mix of domestic violence survivors, relatives of survivors, and impassioned advocates — have remained unflappable in their commitment to the cause. "A couple of photos have had a lot of negative attention, and I can't believe how strong the women in the photos have been. They want the photos to stay up because they believe in the message and how important it is, despite receiving some heinous comments," says Banwell. "Someone actually wrote on one of them, 'I bet your father didn't hug you as a child.' It's just really gross."

As Banwell points out, the need for further narrative on the subject is undeniable. The statistics on sexual violence and violence against women are dire, yet many people don't want to talk about it. The Still Not Asking For It series is definitely a step in the right direction, but how else do we foster that dialogue? In Banwell's opinion, in schools: "In Australia, our education is lacking so much with regard to sex education in general, but also specifically looking at things like domestic violence and sexual assault. I wish someone had explained to me exactly what consent was and how you could say no," she says. "I know many people who have only realized in adulthood that something that happened to them in adolescence or as a young adult was not OK. That can be hard to deal with, and I think that if education started at a much younger age, it wouldn't be such a taboo subject as adults."

Banwell hopes to keep the conversation going in the future by rounding out the series with more photographs, pointing out that the project wasn't complete when it went viral. Because Banwell is from a small, regional town in Australia, most of the people who took part in the project are friends or friends of friends. "Some people have commented on the lack of diversity within the project, [and] although it does include two indigenous Australians and two other POC, there is definitely not enough diversity within the project," she says, adding, "My plan has always been to get to 100 photos, and in the future I want to include anyone who wants to be involved — many races, genders, cultures, and ages."

To see the full series and more of Banwell's work, check out Still Not Asking For It on Facebook and Tumblr. You can also visit rorybanwell.com.

More like this
Sandra Bullock, Girlboss Extraordinaire
By Matt Harkins & Viviana Olen
How The City Healed Five Years On From The Manchester Arena Attack
By Ella Glover
Starbucks' Summer Menu Includes A New Chocolate Cream Cold Brew
By Emma Garza
TikToker Kate Glavan Has The Antidote To The “Hot Girl Walk”
By Alexis Morillo
Get Even More From Bustle — Sign Up For The Newsletter