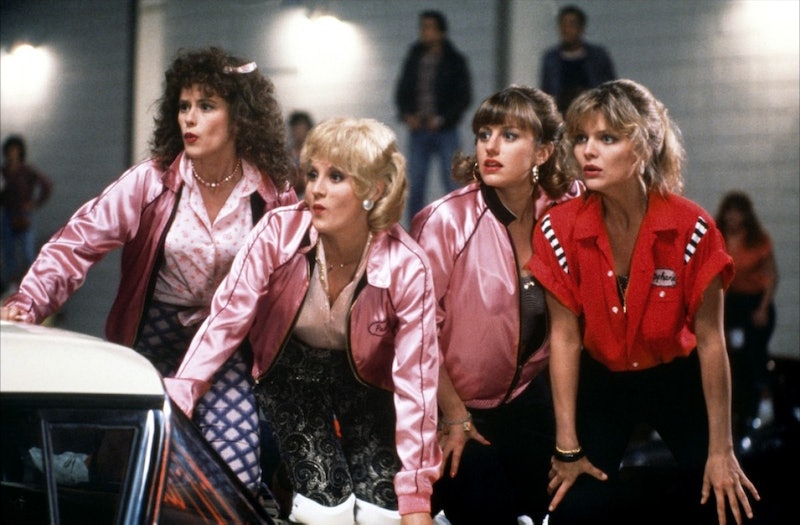 Since it's only a matter of time before Fox’s production of Grease Live! , I’ve been getting extra reflective of the greatest musical of our time. Because, while it's an unquestionable masterpiece that we should revere as the greatest contribution to American culture, the original Grease was also pretty endearingly crazy. So then... you have to assume that Grease 2 is even moreso than the first, right?

In case you’re curious of the plot, the film stars a young Michelle Pfeiffer (I know: I totally forgot she was in this movie too!) as Pink Lady leader Stephanie who attracts the affections of Sandy’s rando British cousin, Michael. But Michael isn’t a cool rider like Stephanie wants, and anyway, her ex-boyfriend (and T-Birds ringleader) Johnny is pursuing her left and right. Will a badass identity reinvention help Michael win Stephanie’s heart?

Yes, because this is sort of a gender-swapped version of the first Grease. But I won't give too much away, because SPOILERS. (And also, I put everything in a nice little chronological recap for you, so if you're going to look at spoilers, at least look at them there.)

Anyway, for your enjoyment, here is a chronological recap of all the crazy moments in Grease 2.

1. Showing Up To The First Day Of School Like:

2. Showing Up To The First Day Of Class In A Blazer And Sweater Vest

With the print on the sweater vest screaming, "I'm just begging to have my ass kicked today."

3. Frenchie Is Going Back To School To Take Up Chemistry And Learn To Make Face Creams?

First of all, I'm pretty sure French was supposed to graduate with the rest of her friends since she was in beauty school for half an hour. Second of all, no.

Go for the Oscar, this is your moment...

5. "Last But Not Least, We Are Fortunate To Have A Straight 'A' Student All The Way From England, By The Name Of Michael Carrington."

So I don't know how things were at your school, but I feel like we never got any intercom announcements about new students at the beginning of each year.

6. Frenchie, Who Is Basically An Isolated Adult In A Pink Coat Here, Assures Michael That Stephanie Is One Of Her Best Friends

She's not like a regular mom, OK? She's a cool mom.

But you know how ~rebels~ are, tearing up the... track field of a high school.

Forever in my gold glitter pants.

9. Johnny's Shirt Is About Unbuttoned About Seven Buttons Too Much

Which definitely violates all dress codes... and probably some health codes...

"I'm free every day. It's in the Constitution."

The tree costume definitely needs some work if they're gonna win the talent show.

13. Just A Normal Day Of School, Drawing Fallopian Tubes On The Board

Kind of a weird Math class, though.

14. And Then They Sing A Song About Reproduction

That's called "Reproduction," because why not.

... the one that looks exactly like the new transfer student but with sunglasses?

16. "So How Was School Today, Did You Make Any New Friends, Do You Want Me To Pour You Some Ovaltine?"

OK, but seriously, Frenchie looks like she's eons older than these kids which is remarkable because all these high schoolers look no less than 28-years-old.

17. The Awkward Moment When Your Boyfriend Pretends There's A Nuclear Bomb Scare So He Can Boink You

Don't you hate that?

18. And Then They Sing This Song Called "Let's Do It for Our Country"

Alternate Title: "Let's Bone For America," because also why not.

There's got to be a lot of nipple-chafing in this film, don't you think?

Just gearing up for her role in Batman Returns.

21. Then She Makes Faces Against His Back For 20 Minutes

There's a hard "WHY" that I could shoot at this statement but tbh I'm pretty sure I don't want to know the answer.

23. And Then There's This Song Where Stephanie Thinks Her Cool Rider Is Dead And Lots Of Frolicking Happens While A Broken Nine Inch Nails' Fog Machine Goes HAM

It's kind of like "Beauty School Drop Out" except not at all.

24. But Whatever, Michael Gets Revealed As The Mystery Rider And Gets Inducted Into The T-Birds For The Last Two Days Of High School

This happens at the end of a luau.

Suffice to say, Grease 2 is pretty crazy. Check it out on Netflix today!