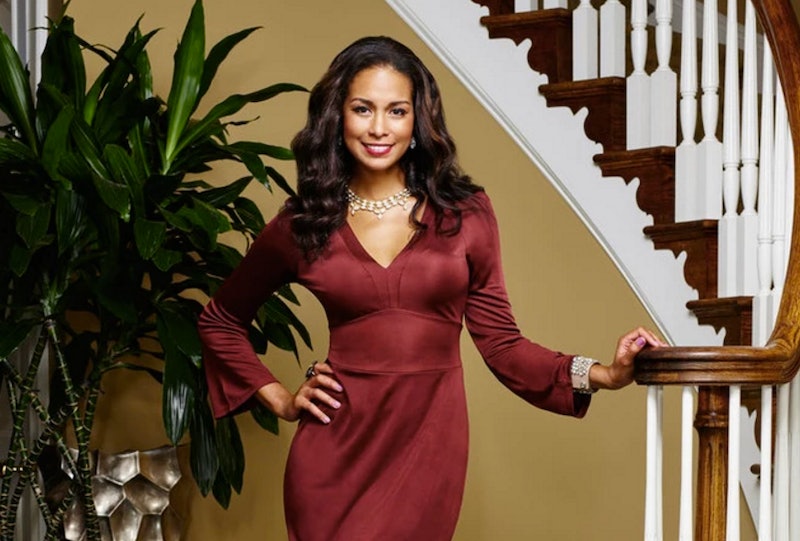 We’re only a few episodes into Bravo’s latest Real Housewives installment, The Real Housewives Of Potomac, which takes place in Maryland. And, just two episodes in, fans are already captivated by Real Housewife Katie Rost’s story. She's a model, TV personality, philanthropist, and single mother of three who recently moved to Potomac after leaving her husband. But, who is Katie's ex-husband James Orsini?

With Bravo teasing storylines about possible wedding bells for Katie and her D.C. investment executive boyfriend Andrew Martin, fans may be surprised to find out that Andrew is not the father of Katie’s children. The couple seems pretty serious and Katie’s Instagram boasts a number of pictures that make it apparent that Andrew fits in well with her children and family. But, how does Katie’s ex fit into the picture? We'll likely learn more about Katie, Andrew, and her previous marriage as the season develops, but, in case you don't want to wait that long, I did some digging.

It turns out the pair had a very When Harry Met Sally-esque relationship, though with a less Hollywood ending. Here are six things to know about The Real Housewives Of Potomac star’s ex, James.

1. They Were College Sweethearts

According to a write-up in The Washington Post about their nuptials, Katie and James met in 1997 at Boston University and were friends for 13 years before they started dating. The couple tied the knot in 2011, after knowing each other for 14 years. If you thought the story couldn’t sound more like When Harry Met Sally, the couple’s first dance was to Harry Connick Jr.’s “It Had to Be You," according to The Washington Post.

As reported in that same Washington Post article, James is a doctor, and the couple began dating during a break in his residency when the pair used the time to take a California road trip.

This detail was also listed in the couple’s Washington Post wedding announcement. It's interesting considering Katie’s commitment to her Jewish faith. The article explained that the couple chose an interfaith ceremony, which makes sense considering their differing religions.

4. They Divorced When Katie Was Pregnant

Katie opened up to OK! magazine about leaving James when she was four months pregnant with their twin daughters. In the interview, Katie called James her best friend, proving that it was a difficult decision for her to walk away. "It was really hard, but I knew that it was the right thing to do," she told the magazine. "I knew that I needed my mom [in Potomac] and that there was no way I would be able to get through the pregnancy if I didn’t have a lot of support.”

5. They Have Three Children

Though the marriage was short-lived, the couple has three children, 3-year-old son, James Rocco, and 14-month-old twin daughters, Kathryn and Renee. Katie told OK! that she and James are good at co-parenting and called her ex a “great father.”

6. They Are Still Friends

The pair is still on good terms, and Katie told OK! that they were still friendly and, despite their divorce, she still loves him.

So, their story didn’t get the Nora Ephron ending, but the couple seems to still have love for each other and are working together to raise a happy family, which is the most important thing.