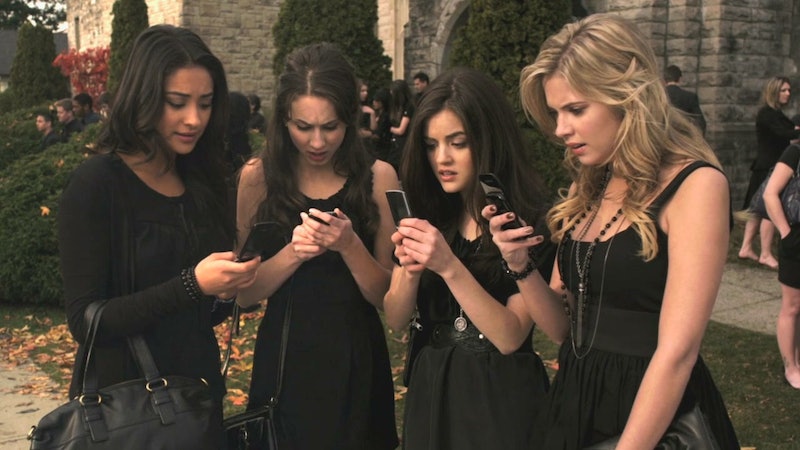 Just when the Liars think they're out, another version of A pulls them back in. It's been five years since Pretty Little Liars revealed that Charlotte was Big A, but that wasn't the end of the mystery surrounding the eldest DiLaurentis. Season 6B showed that Charlotte was murdered the night she was released from the mental hospital, and, as per usual, the Liars are suspected of being involved in her untimely demise. It's not just the police who believe that the girls could have something to do with Charlotte's death: A new Big Bad, otherwise known to fans as B, has officially stepped out of the woodwork on Pretty Little Liars and seems to blame the Liars for Charlotte's death. Though fans are (pretty) sure that the girls didn't actually kill Charlotte, the new B doesn't seem to know that — and he (or she) sent them a particularly threatening text that proves he's out for blood, signed with a very creepy devil emoji. So... what does B's new symbol mean? It could be a major clue.

Mona and Charlotte didn't really work with symbols, which is why this Big Bad's use of them is so intriguing. Fans already know that this character is ushering out the "A way" and taking matters into his own hands by dumping the classic black hoodie, so a new sign off is just the way to say that he's not playing by anyone's rules but his own.

So, what could this red symbol mean? Here are just a few ideas about what B's emoji sign off could represent:

Seems pretty straight-forward, but the symbol certainly looks like some version of a devil — just check out the horns. There hasn't been much devil imagery on Pretty Little Liars, but maybe that's the point: The devil symbol could be an indicator that this guy is a brand new threat and the show's ultimate villain. After all, you can't get much badder than the devil himself, right?

"Red Coat" was Ali, Charlotte, and Sara's disguise at one point, so the color red has significance on Pretty Little Liars. The fact that B chose a red figure could suggest a connection between Charlotte at the time in her life when she was a double agent and dressed up as Red Coat, which was not long after she left Radley and went on the run. If that's the case, the new Big Bad may be someone that Charlotte met while she was still going by the name Cece Drake.

3. The Symbol Represents The Mask Of The Red Death

Musical theater fans may recognize the costume as the one the Phantom wears in Phantom Of The Opera. It consists of a red outfit with a skeleton mask, and comes from the 1842 Edgar Allan Poe story The Masque Of The Red Death . In Poe's tale, a Prince who is desperately trying to escape a plague known as the "Red Death" throws a masquerade ball and finds that an unknown man in a red costume is following him. At the end of the story, it is revealed that the man is a manifestation of the Red Death itself, and soon all of the guests at the party get sick and die. Seriously dark stuff, but it wouldn't be the first time that Pretty Little Liars incorporated a mask with a connection to The Phantom Of The Opera: Caleb wears the Phantom's mask on the Ghost Train in Season 3's Halloween episode.

4. It's Connected To The Queen Of Hearts

Both are associated with the color red, so this connection might not be totally random. The Queen of Hearts also appeared in the Season 3 Halloween episode "This Is A Dark Ride," and both Melissa and Detective Wilden were seen wearing that particular costume. If the new symbol does have a connection to the Queen of Hearts, it might be because of the latter. Charlotte killed Wilden, so could this be a clue that B is "taking over" where Charlotte left off?

Mad props to Pretty Little Liars' ultimate Big Bad for stepping out from Mona and Charlotte's shadow and carving his own identity. Whatever the symbol means, it's already giving me the creeps.

For more on B and everything else PLL, check out Bustle's podcast Taking This One To The Grave.