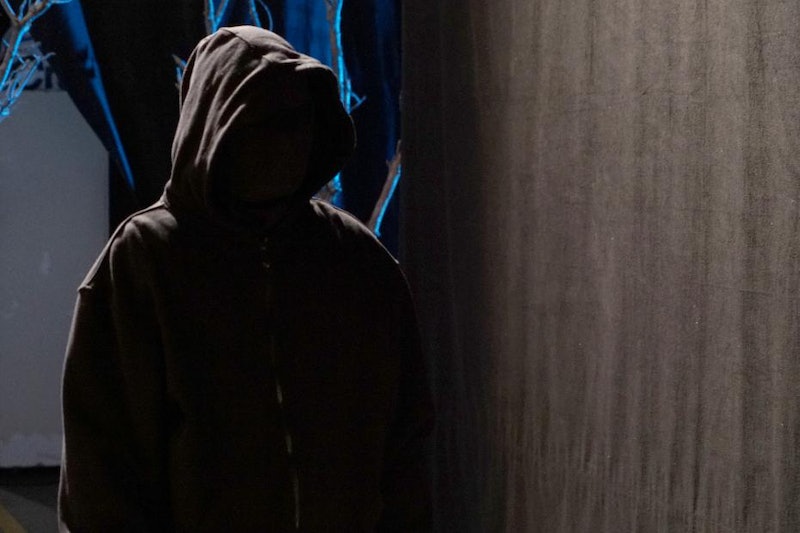 After two jarringly text-free episodes, this week Pretty Little Liars' mysterious new villain finally introduced themselves to the Liars in the only way they could. That's right, in "The Gloves Are On," the Liars received an A text — except it wasn't from A, as Charlotte DiLaurentis was killed in the Season 6B premiere. So what should we call this then, a B text? And rather than being signed with the signature "A," this message ended with a strange, devilish skull emoji of sorts. What does that mean? Why did the villain wait so long to contact them? These things all need to be explained, but right now, the most pressing question is: Who texted the Liars on Pretty Little Liars ? Who is "B"? This villain may have already given a clue to their identity.

But let's backtrack for a second. At the very end of the episode, we saw each of the Liars get a text (except for Spencer, who was too busy doing something of which I cannot speak), and it wasn't until Aria looked at her phone that we saw the actual message. It simply read: "You know who did it and I’m going to make you talk," followed by the skull symbol. The episode then cut to an unidentifiable person in what appears to be their lair, which contained many of the items we've seen A use for the past six seasons. There were masks of Ali's face, creepy dolls, and, of course, a stack of black hoodies. All of these possessions make it extremely likely that this new villain knew Charlotte — and knew that she was A. How else would they have come to own all of her old tools?

The text also makes it seem like this person wants justice for Charlotte's death, as the threat focuses on bringing her killer to light. Could Charlotte have passed the A baton to someone else in he mental institution where she spent the past five years, much like she stole the game from Mona in Radley? Was she planning to work with them after her release, or did she simply regale them with stories of her A exploits, and "B" decided to continue on the tradition in her honor after she was killed?

In true Pretty Little Liars fashion, this reveal raises more questions than could possibly be answered in Season 6B, but I'm so glad to see a new villain in the mix — and can't to hear the familiar sound of the Liars receiving simultaneous texts again. For more on this season of PLL, check out Bustle's podcast Taking This One To The Grave.