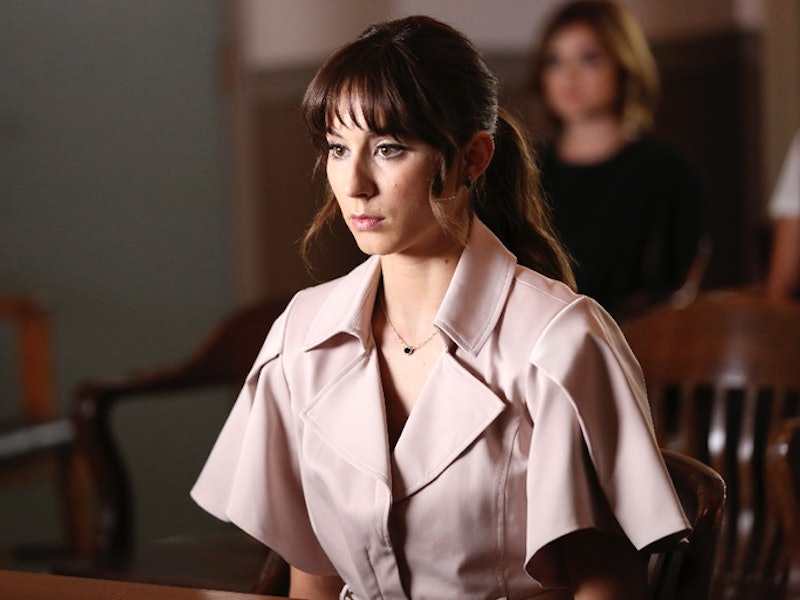 When Pretty Little Liars' Season 6A came to an end this past August, the answer to the show's biggest mystery was finally unveiled: the identity of A, aka CeCe Drake. Yet because this is PLL and Marlene King lives to torture us, that didn't mean that the fight between the Liars and their tormenter is over — as footage of and previews for Pretty Little Liars Season 6B have shown, there's a new threat on the loose... and it's a he. As for the actual identity of this new villain, that's less clear — well, to fans. According to Troian Bellisario, one Liar, or at least her portrayer, likely knows the truth about who "B" or "Uber A" is.

"I may have been let in on some secrets," the actor says, speaking to Bustle, before quickly adding with a laugh, "but I’m not allowed to talk."

As if that isn't tantalizing enough, Bellisario adds that it's not the first time she's been told the truth about a mystery that's tortured fans for seasons. Says the star, "The writers room has been very trusting of me over the years and has let me in on some major plotlines."

Yet before you go after her with a pitchfork and demand answers, the actor is quick to explain that she doesn't know everything about the identity of the Liars' new foe.

"As always, the very exciting moments are the details and how the stories are told, and for that, I am just as in the dark as everybody else is," she says, adding that even the writers don't yet know how storylines will connect. "I think they also have no idea at this point... they get back together at the end of this month. They’re gonna figure out Season 7. They don’t even know."

Well that's... reassuring. Actually, though, I'm glad that the PLL writers don't have everything mapped out perfectly just yet; it leaves room for changes based on how episodes go and what fan reactions are. Still, I can't help but be envious that they, and Bellisario, already know the biggest secret that 6B (or even Season 7 — who knows when this mystery is going to be solved?) holds. Sure, fans have their theories; many are speculating that Andrew, or Noel, or even Lucas could be the head honcho. But until the episodes begin and the truths start getting unveiled, it's all just guesswork. Ridiculously overanalyzed guesswork, but still. Until PLL decides to provide the answer, fans will just have to wait it out and hope that B is Wren — I mean, hope for the best.

For more on Season 6B, check out Bustle's PLL podcast.

More like this
Everything To Know About The 'Pretty Little Liars' Reboot On HBO Max
By Mary Kate McGrath and Jack Irvin
Everything We Know About When To Expect Money Heist: Korea Part 2
By Kadin Burnett
The Umbrella Academy Cast Breaks Down That Wild Season 3 Finale
By Gretchen Smail
Viktor Hargreeves’ Coming Out Scenes Are The Sweetest Part Of Umbrella Academy Season 3
By Gretchen Smail
Get Even More From Bustle — Sign Up For The Newsletter