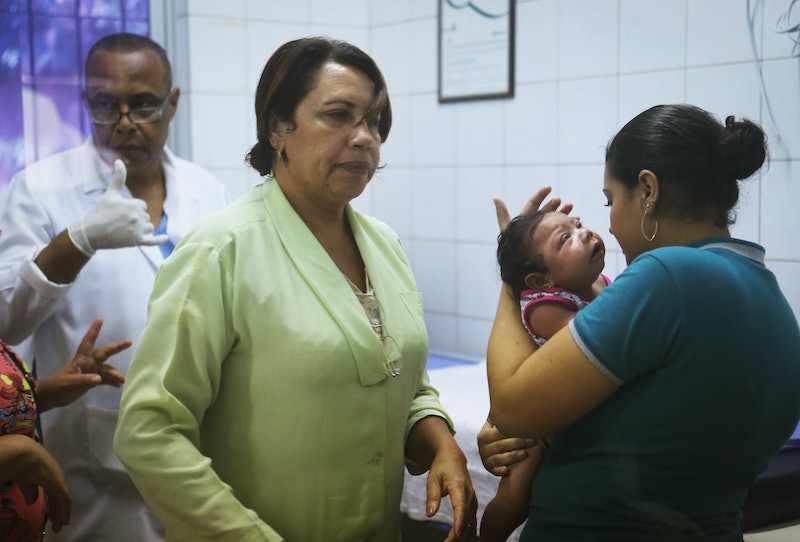 An outbreak of mosquito-borne Zika virus has led to health safety precautions taken by leaders in countries across the South and Central Americas, the Caribbean, and Mexico. On the international level, the Centers for Disease Control issued a travel warning on Friday, alerting all travelers to practice enhanced precautions in preventing mosquito bites in these regions. With all that has happened in the last few days concerning Zika, there are plenty of reasons to take note of the illness and learn more about it. But there's also an important reminder about the Zika virus you should consider if you're already freaking out about the outbreak.

But first, let's get one matter straight. I do believe media outlets have a tendency to go a little overboard with covering breaking news topics or potentially dangerous events — Brian Williams couldn't squeeze enough stories about extreme weather into his nightly newscasts for MSNBC. Seriously, if there was a California wildfire, it was undoubtedly making it onto the national news. However, it is the job of reporters to explain as much verified information as possible on serious issues, and public health matters of international concern are no different. So you shouldn't be surprised when you see a slew of posts covering every aspect of Zika, from the symptoms to its spread.

What you should keep in mind, though, is that you must not let the waterfall of information overwhelm you. The abundance of information you're receiving now on Zika bears a striking resemblance to the flood of media coverage on the Ebola virus outbreak, which began at the end of 2013. The countless number of articles, blog posts, and talk show discussions on the threat of the virus's spread resulted in the issue reaching an extreme.

The consequences were obvious: State and national leaders appeared to be basing their decisions on fear rather than reasoning when it came to matters related to Ebola. In my home state of New Jersey alone, there were incidents of ridiculousness abound due to anxiety about the spread of the virus. Gov. Chris Christie quarantined a nurse whose flight landed at Newark airport, although the woman showed no symptoms of the virus and a quarantine was deemed unnecessary by health experts.

A family even felt the need to keep two children from starting school after the suggested 21-day waiting period, despite the fact that they had come from Rwanda (thousands of miles away from the affected countries) and the kids were symptom-free.

It's true there is a chance that Zika could spread to the United States and impact Americans in the same way it has already affected more than a million people in Brazil. However, health officials and the reporters relaying the information are, for the most part, trying only to inform and educate — not frighten. The more knowledgeable citizens are, the less likely that scenario becomes.

So as you take in all the different information being thrust before you, remember to also take a deep breath or two. And don't let all the crazy in.

More like this
How To See The Lunar Eclipse On May 15-16, 2022
By Kaitlyn Wylde
What To Know About Taking More Than 1 Piriteze Per Day
By Bustle UK
Photos Of Boris Johnson Drinking At A Downing Street Lockdown Party Have Surfaced
By Bustle UK
Taylor Swift, Kerry Washington & More Speak Out On Uvalde Mass Shooting
By Jake Viswanath
Get Even More From Bustle — Sign Up For The Newsletter