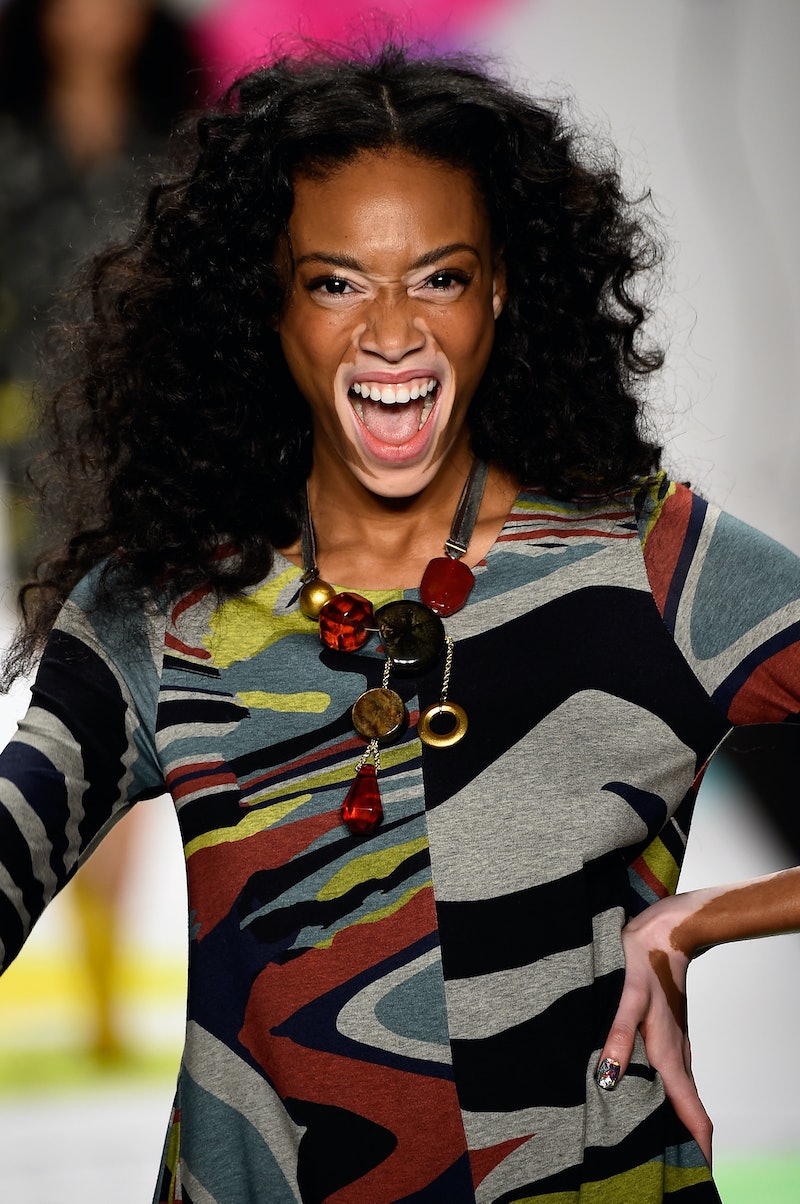 Have you ever heard the phrase "perfect in our imperfections?" When you're putting on foundation in the morning — sometimes wishing your freckles away or annoyed with a scar or birthmark — do you actually believe it? There are people who embrace skin conditions as well as those who try to hide them. Of course, those who want to blend in and buy into traditional beauty standards are't necessarily "less empowered" by any means. But maybe they're just not as brave yet. Maybe they haven't quite gotten the self-love thing down-pat.

That's why we need folks who show us that our differences are beautiful and unique, rather than something to be embarrassed over and wish to change. If it's too hard to figure out how to break free from beauty standards on your own, it helps to have someone to look up to. Someone who embraces their distinctions and celebrates them. Because once you see someone truly in love with how they look and genuinely happy over all their little quirks and eccentricities, then those good vibes begin to rub off on you.

And if you're anything like me, you begin to look in the mirror a little differently, considering your own "flaws" in a new light. Below are 11 people who have embraced their skin conditions — and perhaps inspired many more to do the same.

Mirian Njoh has albinism, and though she struggled with her skin condition when she was younger, she now uses it on the road to success. Case in point: She's a stylist, model, and photographer. Instead of allowing her condition to limit her, Njoh lets it help her reach her potential.

No matter what situation you're in, it can be hard to be the "different" one. The one who stands out. In a social project called "Ugly Duckling Diaries" by Tania Taiwo, Njoh shared how she changed her attitude about her condition. She said, "And that’s what I’m learning, how powerful it is to be different. It can be your biggest strength. Before I saw it as a crutch, a hindrance. But now, I see my differences help me stand out."

Instead of wanting to hide what makes you different, why not embrace it? You never know where that kind of mentality could lead you.

Souffrant Ralph is a NYC model with a crop of red hair and a thick smattering of freckles running down his face and chest. He has a distinctive look that's hard to forget — something he seems to know and embrace.

Instead of trying to hide his differences, he uses them to define him and help him stand out. Just the fact that he chose his career to be modeling — a profession that centers all around an individual's face and body — proves as much.

British photographer Brock Elbank's new series, #Freckles, celebrates freckled faces and sun-kissed backs. The project currently showcases 90 portraits of freckled people from all parts of the world, highlighting how beautiful our differences can be if only we look at them through a positive lens. In his photo series, the subjects look intense, almost regally-calm, and slightly defiant. As though they're daring the observer not to appreciate their differences.

Elbank explained to People, "I've always loved freckles, and what I find interesting about individual characters that I meet and have been fortunate to photograph is that, generally, they've struggled having them in their infancy and either hated them, or grown to live with them or even like them in adulthood." The beautiful thing about a project like this one is that if someone is struggling with their own freckles, they get to see just how striking they can actually be.

Another portrait from Elbank's #Freckles series, it's beautiful to see how he specifically aimed to darken and contrast the subject's freckles across her face and along her back to highlight the characteristic. This move helps show that beauty is diverse; there isn't just one standard. Rather than having a person with deep freckles feel like this is supposed to be something that needs to be covered up and faded away, he's proving that the characteristic has power and beauty all of its own.

Also known as Winnie Harlow, Chantelle Brown-Young is a model with vitiligo, an autoimmune disease that causes a loss of pigmentation and lighter patches to occur on the skin. She's become huge on the runway these last couple of years, walking in London Fashion Week, starring in Diesel's 2015 campaign, and becoming the new face of Desigual. The interesting thing about Brown-Young is not only that she is helping the fashion industry expand what it means to be beautiful, but that she doesn't want her skin condition to define her.

Harlow still embraces it, but she would prefer it to be a non-issue. As in, she hopes that she can still be seen as a talented professional without the white patches marbling down her body. She told The Guardian in an interview, “If one day I’m all black, I’m still a model. If one day I’m all white, I’m still a model. I am not my skin. I am a model with a skin condition.” Not only does she embrace her appearance, but she's moved past the point where she believes it to matter at all.

While sometimes our differences can lead to our successes and life's work, other times it's important to just embrace them and find the beauty in them regardless. In this photo, Twitter user Katelyn outlined her vitiligo so it looked like a world map, showcasing her condition as something striking rather than something to hide. And her message? "Say what you want. I'm comfortable with the skin I'm in." Amen, girl.

Using Kylie Jenner's #IAmMoreThan hashtag, Twitter user @uncoolafi embraced her acne and encouraged anyone struggling with mild to severe variations of the condition to do the same. Even though acne is the most common skin condition in the United States, according to the American Academy Of Dermatology, it's still heavily stigmatized — the pressure to hide, conceal, and zap it away being all too real.

While our comfort levels showing off are acne are bound to vary person to person, @uncoolafi proves that every face is a stunning one — whether it's blemished or not.

Often regarded as the first professional male model with albinism, trailblazer Shaun Ross started the movement known as #InMySkinIWin in order to encourage anyone who has ever felt hurt over looking different. According to the movement's landing page, "The average human's sense of self worth has been silenced by the lack of courage, triumph, and self encouragement in the world [...] Shaun's mission is not to stop bullying entirely, but rather to shape the way we as individuals think about ourselves personally." Haters are always going to hate, so just make sure you're not one of them.

Writer Carly Findlay was born with a genetic skin condition called Ichthyosis, which can cause red, scaly skin. In a heartfelt Instagram post, she explained how it feels to live with her condition. "When people tell me they wish there was a cure for Ichthyosis, or that I'm pretty, despite, or that they couldn't handle looking like me, I realize my strength. I shrug off the way the media portrays perfection. We win in our skin when we are comfortable enough to reject those standard beauty norms and celebrate our differences. We win in our skin when we tell people we are happy with our appearances and don't need to be fixed."

She doesn't have to "live" with her condition. She accepts it, and finds herself beautiful regardless of what kind of beauty standards others try to push onto her.

Twitter user Marleen has a birthmark that runs across the right side of her face, but rather than covering it up she finds the sweetness in it. She pointed out, "Be who you are and find beauty in it. I have a birthmark on my face. It looks like half a heart." Adorable.

You might know Sir Maejor from roles like "Albino Henchman" on American Horror Story: Coven, but he's also a proud albino model and actor. That is evident from this photo, where he plays up his pale skin and adds a touch of dreaminess with the gold-leaf accents, really driving home how beautiful his skin is.

Twitter user Tiarra Pearson could have easily hidden her light birthmark with a swipe or two of foundation, but she'd rather embrace it. If we want to change beauty standards and promote self-love then we need to stop trying to hide our differences and instead simply celebrate them.

Everyone is beautiful. So let's take a cue from these strong, bold individuals and begin to believe it.