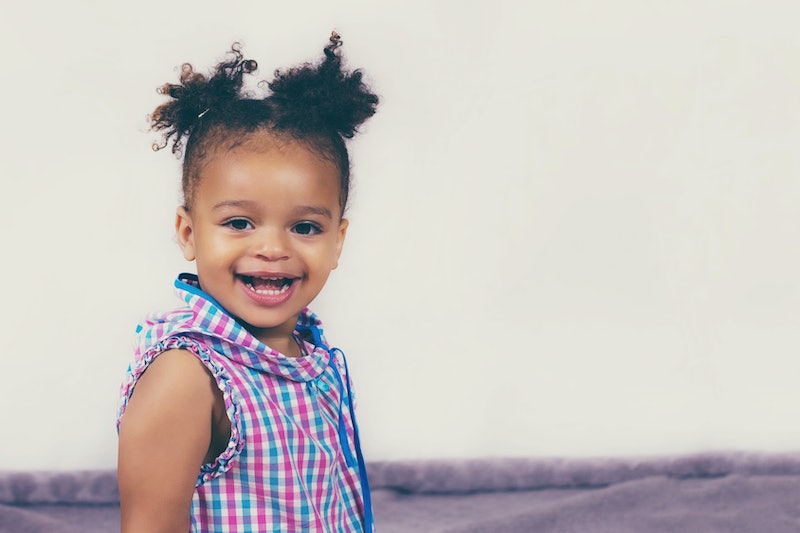 True story: One of my favorite ways to give my brain a break from studying in college was looking up the meanings of different names on baby name websites. I fell out of the habit after I finished school (which was longer ago than I care to admit at this point), but every so often, I’ll give a character name from a TV show, book, or movie a quick search, just to see what I find — and you guys? A lot of names have some incredibly surprising meanings. A lot of popular ‘90s baby names have surprising meanings in particular — so if you’re as weirdly fascinated by this kind of thing as I am, let’s take a look at 10 of ‘em, shall we?

I pulled the names seen here from the Social Security Administration’s data on the most popular baby names of the ‘90s, because if it seemed like you knew a million different Courtneys growing up... well, there’s a reason for that. Of course, if you’re looking at this list because you’re preparing for the arrival of a little one and like the idea of bringing a ‘90s name back, it’s worth noting that you don’t have to pick your offspring’s name based on its meaning; from a practical standpoint, whether or not you like the way it sounds is arguably more important than what it actually means. But if you’re into knowing the derivation of particular monikers, or like the idea of a meaningful message hiding within a name? This one’s for you.

Just know that a number of these commonly-encountered names have some… unexpected translations.

“Emily” is frequently cited as meaning “industrious” or “hard working”; however, its possible origins reveal something I didn't see coming: The name is likely derived from the Latin “Aemilia,” which comes from “Aemilius,” which is in turn a Roman family name we think comes from the word “aemulus.” And guess what "aemulus" actually means? “Trying to equal” or “rival.” I guess it’s a good name for the highly competitive children of the world.

A precious name for a precious thing: “Megan,” which is Welsh in origin, is a version of “Marged,” from “Margaret.” All three of these names mean “pearl.”

Of course, names don’t exist in a vacuum; “Megan” also appears in a few other languages, including Persian, where it means “child of light.”

Not going to lie — this one kind of made me laugh. “Brandon” is an English name meaning “broom-covered hill.” I know that in this case, the broom in question is a kind of plant; however, that knowledge did not stop my brain from conjuring up an image of a rolling green hill absolutely covered with a comically large amount of the other kind of broom — the one you sweep with.

This one made me laugh, too. Baby Name Wizard describes “Kyle” in somewhat flowery language, calling it a “transferred use of the surname originating from the region of the same name in southwestern Scotland”; the site defines it as “a topographical term referring to a narrow, straight channel” derived from the Gaelic word “caol.”

Nameberry, however, keeps it hilariously brief: “A narrow spit of land.” Because every parent dreams of comparing their child to a spit of land.

Man, ‘90s names are just full of unexpected humor: “Courtney” is, apparently, a French name meaning “short nose.” It also means “from the court,” which makes sense, both for the obvious reason and because “Courtney” was an aristocratic family name. The family name, though, was based on the Old French word for — you guessed it — “short nose.” And that? Is hilarious.

“Cody” is an interesting case due to the fact that it appears to have an impressive variety of seemingly unconnected meanings. Its most widely cited meaning is Celtic in origin and translates to “helpful person” or “son of the helpful one”; however, it’s also said to mean “wealthy.” My favorite meaning, though is one not commonly found, but still noted in a few different name databases: “Pillow.”

The ‘90s were a major time for Biblical names; the SSA’s list of boys’ names in particular are full of godliness. I’ll admit, though, that I wasn’t expecting “Tiffany” to be religious in origin — it means “god’s appearance” or “manifestation of god.” The meaning of the name made a little more sense, however, when I learned that it’s derived from “tifaine,” the Old French word for “epiphany.”

Ready for this one? “Melissa” is a Greek name meaning “honeybee.” True story.

If you name your kid “Connor,” you might want to consider getting them a puppy at some point during their childhood; while it’s true that the Gaelic-derived name can mean “strong-willed,” it’s also said to mean “lover of hounds.”

OK, to be fair, “Jennifer’s” meaning isn’t that surprising; it’s often translated as “fair one” or “white lady.” Its origin, though, is pretty dang cool — it’s a version of Guinevere. I did not know that previously, but now I do, and I think it’s awesome.

More like this
The Rarest Baby Names In The U.S., According To The Most Recent Data
By Mia Mercado and Emma Carey
David Schwimmer Doesn't Remember This Classic 'Friends' Episode
By Sam Ramsden
The 'Hocus Pocus' Sequel Finally Has A Release Date & It Makes Total Sense
By Shannon Barbour and Radhika Menon
5 Mini Skirt Outfits To Wear, Inspired By These Brave Souls
By Avery Matera
Get Even More From Bustle — Sign Up For The Newsletter