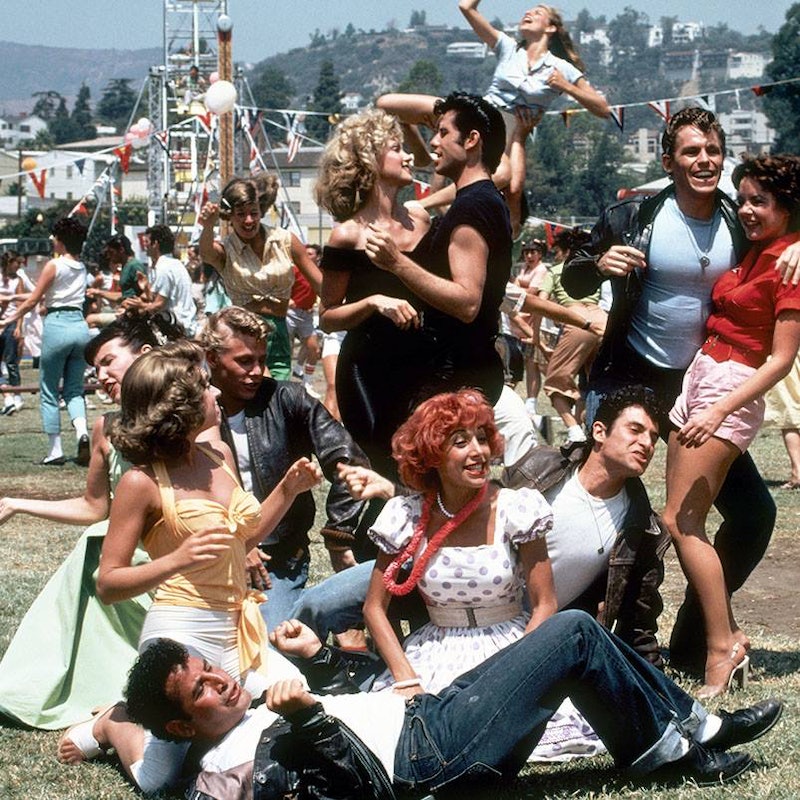 Grease set the standard for high school musicals when it was released in 1978. Danny and Sandy's summer romance-turned high school sweethearts story is timeless and legendary, thanks in great part to stars John Travolta and Olivia Newton-John. But, Grease is also an incredibly strange movie. It's got thirty year-old actors playing teens, dream sequences ("Beauty School Drop Out"), a character literally named Cha Cha, drag racing, a pregnancy scare, and a flying car. Yeah, it's weird. But, it's also complex and kind of amazing. One listen to "Summer Nights" and it's impossible not to love. So, it is with love that I must point out these super weird Grease plot holes.

Before you get your poodle skirt all in a twist, know that I am a believer in Grease. I've seen it on stage multiple times and have watched the movie at least a good 30 times. No matter the plot holes, Grease will always have a special place in my heart. I have forgiven its stars for being fully grown adults playing teenagers. I have forgiven "Hopelessly Devoted To You" for being so hopelessly boring. And I have forgiven Grease for tricking my younger self into thinking that Sandy was actually a better character than Rizzo. But, alas, these nine plot holes in Grease are just unforgivable.

Yes, Sandy and Danny may have just been engaging in some "Summer Lovin'," but it still seems weird that they never talked about where Danny went to high school, or never exchanged numbers or addresses so that Sandy could contact Danny when she found out she was staying in the States. It's not a huge plot hole, but it's still pretty strange.

2. How Did Any Of Them Make It To Senior Year?

This one is particularly aimed at the T-Birds — Kenickie, Sonny, Doody, Putzie, and Danny. They show absolutely no academic initiative throughout the film, and it seems pretty obvious they've basically never shown up to class in the past three years. How in the world are they not stuck repeating freshman year over and over again? (Also: how have they not been arrested? I feel like Kenickie has definitely done some shady things in his past.)

As if Danny being cool and Sandy being a good girl wasn't enough to keep the love birds apart, Cha Cha and Leo come in specifically to break Sandy and Danny up, as well as cause friction between Kenickie and Rizzo. But, who are Cha Cha and Leo exactly? Are they in high school? Are they Danny's old dance rivals? How did they get into drag racing? Why are they in this movie?

Seriously, why did Rizzo think Sandy could not hear her sing an entire song making fun of her? When Rizzo sings "I'm Sandra Dee" at the sleepover, Sandy is literally right in the next room. Sure, she's brushing her teeth, but that doesn't stop her ears from working. Rude, Rizzo. (Also: why does Frenchy go along with this mean girl foolery?)

I mean, I get that he's too cool for organized sports and stuff, but, come on, this is just ridiculous. (While we're on the subject, how in the world did Sandy make it onto the cheerleading squad? She can't even do a passable cartwheel.)

Frenchy starts doubting her lifelong dream of being a stylist after she dies her hair bubblegum pink, but it isn't really the worst color she's ever had. Remember when she went to the school dance as a "beautiful blond pineapple"? Yes, maybe dropping out of high school isn't a great idea, but pink hair should never make someone sad. And she looks damn good with it too.

7. Why Does Rizzo Take Kenickie Back?

Why? Just, why? Rizzo is fierce, beautiful, confident and smart. Kenickie is... Kenickie. He has, like, zero redeeming qualities. Rizzo deserved better.

Like, just no. How did one of those girls not stomp on his face?

Oh, Grease Lightening, you magical vehicle, you. Why Grease ends with a flying car is a mystery we will never get to the bottom of. Though it has helped inspire a theory that Grease is a fantasy Sandy has right before she drowns in the ocean. So... there's that.

All in all, Grease is one confounding movie, but that's OK. Just like Sandy loves Danny despite his athletic ineptitude, we love Grease despite its plot holes. I guess we go together after all.