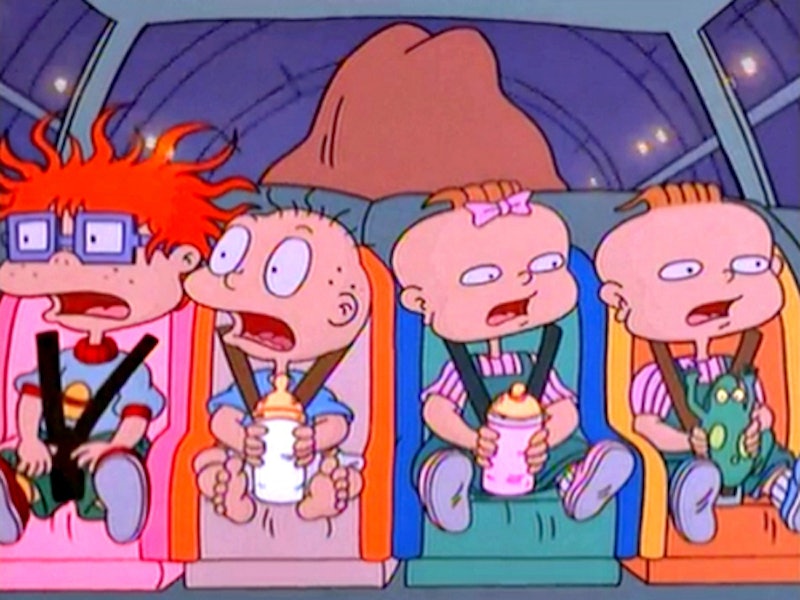 The Nickelodeon nostalgia factory might soon be churning out another treat for you. Hot on the trail of throwback channel The Splat, it's been recently reported that Nickelodeon and Paramount will be putting out a film featuring multiple Nicktoons characters from a melange of retro Nick shows. That includes (but isn't necessarily limited to) Rugrats, Ren & Stimpy, Rocko’s Modern Life, Aaahh! Real Monsters, and The Angry Beavers. All of it is very, very, exciting, but it begs the question... how exactly are these shows connected? And, more to the point, how are they going to connect other shows to this?

Because as of this moment you're tampering with the malleable conflict of different animation styles with the intense conflict of mixing a show about babies with a selection of raunchy animals. Tonally speaking, this isn't going to be cohesive. Furthering that, the logistics of summoning a bunch of shows together into one place seems like it would need to involve a variety of interdimensional portals, connecting them through a rip in the fabric of the universe.

OK, at risk of overthinking it, here are a few guestimations of how exactly all these characters are going to connect.

Rugrats and The Wild Thornberrys exist in the same world, that is canon. There was a whole mediocre movie about it. Furthering that, a Rugrats Halloween episode had a crossover of Aaahh! Real Monsters, and even though it seemed to be a figment of Angelica's imagination, it's plausible those monsters are sincerely hiding out. It's as plausible as talking babies, at least.

Who else could be lurking there, though? As far as animation goes, Rugrats isn't too different from As Told By Ginger. Like, if you told me that Ginger went to the middle school a town over from wherever the Rugrats were having their All Grown Up adventures, I'd believe it.

Ren & Stimpy And Rocko's Modern Life Have Different Towns, But Seem Likely As Having A Similar Universe As Well

For the unaware, Ren and Stimpy live in Hollywood, Yugoslavia, while Rocko lives in the vague world of O-Town. Neither place makes much sense, and neither place sounds like... a real place. But I wouldn't be shocked if Ren, Stimpy, Rocko, Heffer, and that perpetually anxious turtle lived in the same universe. The risqué subject matter alone feels as though it would unite all these animated animals.

The Angry Beavers... Could Plausibly Be In The Same Universe As Catdog?

It makes a lot of sense to me that the naughtier animals stay in one universe, whereas these bands of brothers stay in their own. Again, stylistically the animation is similar, it doesn't feel like such a stretch. Of course, there could just be some massive universe of talking animals, which would encompass a lot of cartoons.

Maybe Someone Could Get Jimmy Neutron On The Case?

Universe-jumping seems like a job for a boy genius, and having watched the first Jimmy Timmy Power Hour (APPARENTLY THERE WERE THREE) I know that that kid can craft a mean teleporter. Teleports are a major life hack when it comes to crossing over between shows.

Spinning Off That, You Could Get Timmy Turner To Unite Everyone

Legit, though, because that spoiled brat just has to say "I wish" and poof! You have a hell of a scenario on your hands. In Channel Chasers Timmy wished to be inside the television and stumbled upon veritable parodies of every show imaginable, Rugrats includes. Could we just do a variant on that?

Or, We Can Just Go Full Roger Rabbit On This Situation And Assume That There Is A Whole Universe Where Nicktoon Characters Co-Habilitate

The premise? Now that these shows are defunct, they're spending their retirement on the planet Nicktoonia. But what exactly would bring everyone together? Is an evil force by the name of Online Streaming threatening the survival of their humble home? That, my friends, is something even I can't figure it.

Truth is, it'll be a while 'till we get solid answers, but I'm excited the gang's all coming back regardless.

More like this
David Schwimmer Doesn't Remember This Classic 'Friends' Episode
By Sam Ramsden
Hayden Panettiere Will Return For 'Scream 6': "We F*cking Won, Scream Fam"
By Jack Irvin and Jake Viswanath
'Derry Girls' Sister Michael Isn’t As Fictional As You Might Think
By Olivia-Anne Cleary
Kim Cattrall Spilled All The Tea About Not Being In The 'Sex And The City' Reboot
By Radhika Menon
Get Even More From Bustle — Sign Up For The Newsletter