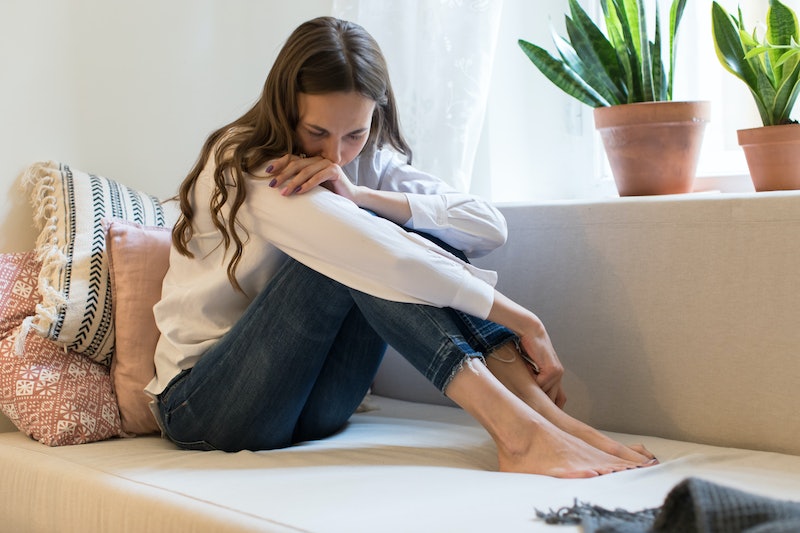 While everyone gets mad from time to time — and it can even be healthy to do so — not everyone can keep a handle on their emotions. Experiencing uncontrolled anger is not the best feeling, especially when you have to deal with the ramifications. When that happens, you may want to consider whether or not you have an anger problem.

Normal anger, and an anger problem, are too totally different things. Like I said, expressing normal amounts of anger is just fine. As Robert M. Fraum, Ph.D., says on his website AngerManagementNYC.com, "Healthy anger is deliberate, proportional, and responsive to a clear and present need. [It is] a powerful tool of human survival and adaptation."

Healthy feelings of anger, according to Fraum, are an instinctive physiological reaction, and an inner signal that something may be wrong. For example, we feel angry when we see someone being hurt, and that anger pushes us to go do something to help. But unhealthy anger, such as rage or passive aggressiveness, doesn't do anyone any favors.

Unhealthy anger shows up in a bunch of different ways, like the aforementioned rage or passive aggressiveness. It can also reveal itself as resentment, judgement, manipulation, and verbal or physical abuse. However, Fraum is quick to say that you shouldn't be alarmed if you experience one or more of the above anger behaviors. "Anger problems are a matter of their degree, duration, and consequences," he says.

If you're wondering if you're anger levels are normal, or venturing into the "unhealthy" zone, then check out these signs that you might have a problem.

Passive aggressiveness may not look like typical anger (it's not loud, or violent), but it certainly counts. After all, are you ever passive aggressive without feeling angry? My guess is, probably not. But then again, you may not even know you're resorting to this type of anger. According to PsychGuides.com, "People experiencing passive anger may not even realize they are angry. When you experience passive anger, your emotions may be displayed as sarcasm, apathy or meanness. You might participate in self-defeating behaviors such as skipping school or work, alienating friends and family, or performing poorly in professional or social situations. To outsiders, it will look like you are intentionally sabotaging yourself, although you may not realize it or be able to explain your actions."

2. You Get Straight Up Aggressive

Everyone gets angry, but not everyone punches walls, road rages, or verbally abuses those around them. If you get to this level of rage, then you certainly have a problem controlling your anger. As noted on PsychGuides.com, "Aggressive anger often manifests as volatile or retaliatory anger and can result in physical damages to property and other people. Learning to recognize triggers and manage anger symptoms is essential to dealing positively with this form of anger."

3. You Blame Other People

It's easy to get angry when you blame other people, because feeling like other people are at fault for your own situation can be quite annoying. But anger problems have less to do with what happens to you than how you interpret and think about what happened, according to Jeanne Segal, Ph.D, and Melinda Smith, M.A., on HelpGuide.org. "When anything bad happens or something goes wrong, it’s always someone else’s fault. You blame others for the things that happen to you rather than taking responsibility for your own life," they said. Take note of this the next time you want to blame someone for how bad you feel.

4. You Get Angry Too Often

Have you totally lost your chill? Being angry all the time is not only a sign of a problem, but it's just plain old not healthy. According to Melissa Bienvenu on WebMD.com, "Chronic, ongoing anger can tear down your relationships, job, social life, reputation — even your health." So, for your sake and the sake of everyone around you, do something about your anger issues if they are constant and ongoing.

5. Your Anger Is Disproportionate To The Situation At Hand

It's OK to get angry, but it's not OK to completely lose your mind — especially over something small. This makes me think of classic movie scenes where a person can't keep their golf ball on the green, so they go berserk and break all their clubs over their knee. Not cool, but apparently more normal than you might think. According to Kevin Hoffman on MensHealth.com, a Harvard study showed that almost 1 in 10 adult men routinely display wildly disproportionate aggression, and are so angry that they're likely to damage property, or threaten or injure others.

6. Your Anger Lasts Too Long

While outburst are no good, neither is a long, simmering bought of anger, or a total freakout that lasts for forever. When anger lasts too long, it can be a sign of a problem. According to anger management specialist Dr. George F. Rhoades, on HealthyPlace.com, "We typically look at anger that is chronic, or that adversely affects our lives as being harmful. We also look at when anger becomes a problem, i.e. lasts too long, too intense, too frequent."

If you're anger is putting yourself or others in danger, or interferes with unrelated aspects of your life, then it may be time to seek some help from a therapist. There's no shame in it. The sooner you get help, the better.

More like this
These 4 Signs Are The Seductive Sirens Of The Zodiac
By Brittany Beringer
Think Your Partner Is Cheating? These Tarot Cards May Confirm Your Suspicions
By Kristine Fellizar
21 Signs You're Not In Love Anymore
By Sara Altschule, Kathleen Ferraro and Carolyn Steber
These 4 Signs Are The Sarcastic Jokesters Of The Zodiac
By Brittany Beringer
Get Even More From Bustle — Sign Up For The Newsletter