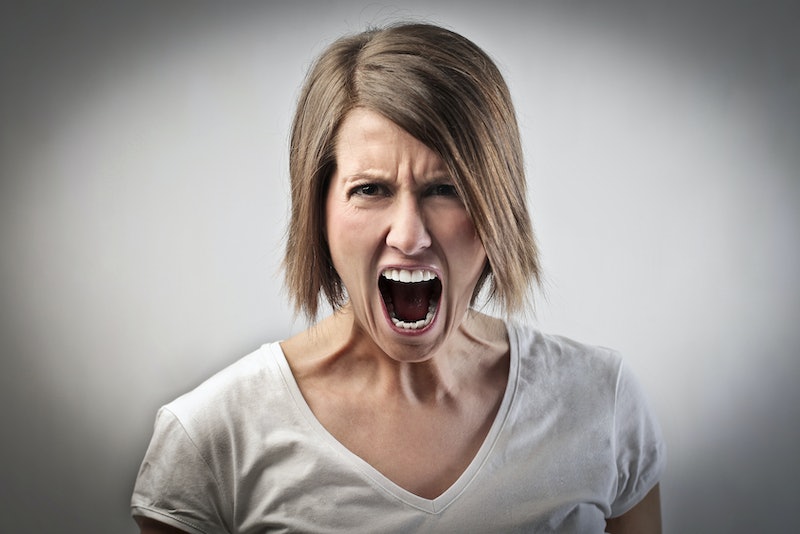 We have been encouraged since childhood not to feel (or at least not to express) anger — especially women. Angry outbursts are taken to be mostly evidence of poor character, including hot-headedness, impulsivity, immaturity, and irrationality. But why must we contain or suppress our anger? What is so inherently bad about it? New research from psychologists at the University of Michigan suggests that anger has a significant cultural component which varies between the eastern and western world. In other words, if it's done correctly, anger might be healthy.

The Michigan psychologists studied anger in American and Japanese mid-life adults using data provided via wide-scale surveys. They compared biomarkers (of inflammation and cardiac health) of the participants with self-reported angry behaviors, whether verbal (yelling) or physical (slamming doors). The psychologists' findings, published in the journal Psychological Science, held that Americans who got angry more often were in worse physical health as a result of it, but that Japanese people who got angry more frequently enjoyed better health. The Japanese participants seemed to understand anger as a privilege or display of power, not a show of weakness in a group, so their bodies weren't stressed out about it.

You've probably already heard that anger is unhealthy, especially for your heart, but even just amongst Americans it's complicated. When the statistics are studied scientifically, people do seem more likely to have a heart attack after an angry outburst. But in patients who did not have risk factors for cardiovascular problems and who were occasionally but not constantly angry, the risk of heart attack hardly went up at all following an outburst (perhaps the difference was not even statistically significant). It took being in relatively poor cardiac condition and getting angry multiple times per day to raise heart attack risk following an outburst by five times over.

Thus, if you get genuinely angry at too many things, like minor family annoyances and sporting events on television, and your heart is already in bad shape, you would do well to curb your angry enthusiasm (while taking other steps to improve heart health, too). But also realize that many other activities carry with them a heightened risk of heart attack soon afterwards — including having sex and exercising. These raise your risk of a heart attack by about a factor of three in the hours that follow, as compared to anger's alleged worst-case factor of five.

But sex and exercise also offer health benefits, and you probably enjoy them. Of course, no one would suggest (under ordinary circumstances) that you should quit these other behaviors just to prevent relatively remote risk of a heart attack. Anger also offers benefits — anger motivates people to volunteer more, for instance, and anger sometimes feels satisfyingly cathartic in the end too. So as long as you're basically healthy (and have a healthy, productive, social life not threatened by your temper), there's just no good reason to reign in your anger to benefit your health — but don't make a habit of being constantly upset.