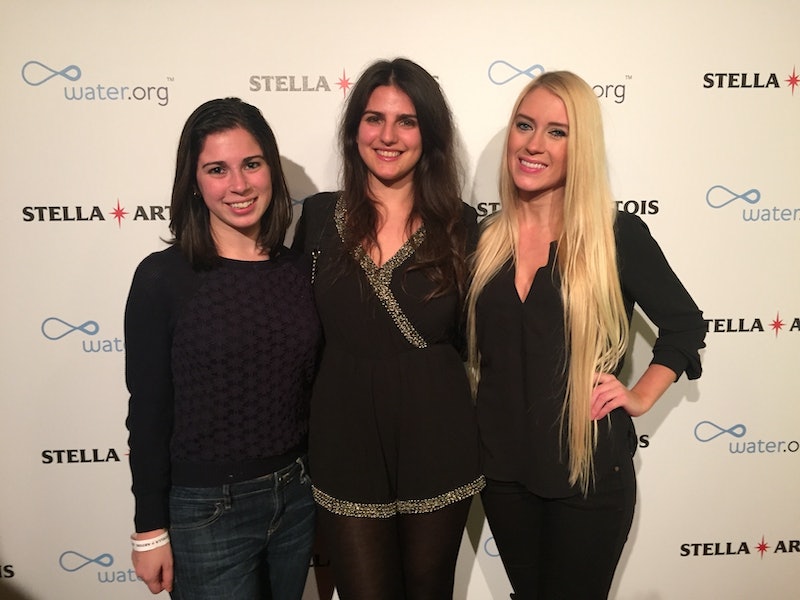 Seeing breakout films, taking selfies with A-listers, making connections in the industry, interviewing up-and-coming stars, partying, etc. — everyone has a goal when they go to Sundance Film Festival. I was invited by Stella Artois to attend some pretty awesome panels, but I did have another personal mission to accomplish while I was there: make out with a celebrity.

When I heard on Watch What Happens Live that the cast of Vanderpump Rules would be at Sundance, I started to hear the angels singing. No, no, I wasn't going to try to kiss any the lead guys, who all have girlfriends. I would target a little-known bus boy, James' opener DJ, or maybe that guy Anthony who was on one episode (the one who got mad at his ex-girlfriend Lauren, the scratcher, for hooking up with and biting James).

As backup, I studied guides to D-list celebrities. (Hey, I'm already aware of the A-listers.) I kept coming across Dustin Diamond, who I didn't think would be there, considering he just started a four-month jail sentence. Back to the drawing board. I felt like it was officially time to up my game. I looked up the movies premiering at Sundance in the next two days and the actors in them to see who would be at the parties. Wouldn't it be cool to have made out with the ~next big thing~ before they even knew they were the NBT? Yes, the answer is yes.

Make out with a celeb, any celeb (no, not any celeb but yeah, kinda, sure!), with a big focus on newcomers and Vanderpump Rules' bus boys, which I was overly confident would work. And obviously, if Leo came up to me and was like, "Hey, I'm totally over models and I've seen all your work about emojis on Bustle and I love you!" that would work too.

My plan was to keep it cool — I'd use some of the strategies I learned from The Professional Wingman. I wasn't going to follow someone through a club or throw myself at anyone. I wanted this celeb makeout to be organic, but I only had 48 hours to find a partner and fall in love, so I had to keep my eyes on the prize.

So here's what happened when I got to Park City:

I whipped my phone out and downloaded Tinder the moment the plane landed. (Shoutout to the woman in the window seat looking over my shoulder as I wrote my tagline. I HAVE A JOB TO DO, OK?) While Tinder's not my thing in NYC, I figured Utah would be a different scene. Maybe some of the up-and-coming stars would be on there. Maybe there would be big-time Hollywood agents who could introduce me to their famous clients. Hey, a girl with a major mission to accomplish in two days can dream.

On the way from Salt Lake to Park City, I swiped right on about 11 Olympic athletes (and one orthopedist because I'm having knee problems and really need someone to talk to about it) before deciding they were probably busy skiing down mountains backwards in blindfolds and weren't the public figures I should be focusing on. That was probably a mistake in retrospect, and I'm looking up flights to Utah to correct my wrongdoings.

I also came across someone who said he was at Sundance to "make someone a star," but I needed more proof that he actually knew some stars before I continued. And then the conversation got creepy, as they tend to.

I must say dating apps during Sundance are really a sight to be seen — more on that here.

I Stepped And Repeated

Right next to the step and repeats (those logo-filled backdrops at events where people strike a pose) at Sundance parties, everyone whispers, "Wait, who is that?!" and usually no one knows but they take pictures of them anyway. I was hoping they'd do the same about me and maybe someone who had a few too many would insist I was that weird sister on Degrassi and then rumors would spread to all the actors at the party. Just strategizing here.

At the bar, I met a funny producer from New York who worked on one of the films premiering at Sundance. Hm, if the film won awards would he be considered a celeb? While I pondered his star potential, he had recognized an older guy he was dying to talk to and put me on hold so he could sweet talk this "huge connection." I imagine this is what meeting people out in LA is like. #Next

Right near the producer was his cute friend, who also happened to be an actor whose film was premiering that weekend. Jackpot! He looked familiar, but I actually thought he was a different actor until he told me his name. Up until that point, I thought I had been flirting with a totally different (and more well-known) actor. We chatted for a bit, finished our drinks, and then he suggested we go to another party. As I was getting my coat, I overheard it, the G-word: GIRLFRIEND. He had a girlfriend, a very famous girlfriend. I wished he was the actor I had mistaken him for. I cool story bro-ed him and bounced on to the next spot in search of an actor who wasn't attached, if that wasn't so much to ask for.

One of my favorite parties was Barclaycard Arrival Presents 364 Main, which I stopped by during the day for some drinks, mingling, and more importantly, to see The Points Guy, who received the loudest round of applause I've ever witnessed in my life.

Because of all the Bumbling and Tindering "work" I was doing, I needed to charge my phone. I went into a side room with my cocktail and used one of charging stations, only to find out that I missed some big-time celeb cameos: Jesse Metcalfe (girlfriend, though?), John Legend (<3 Chrissy Teigen), and (single?) Justin Long.

I cursed my phone and went to the "Buy A Lady A Drink" event, putting my personal mission aside for one that was actually important: Stella Artois and Water.org's campaign to end the world water crisis.

And Then, It Happened...

Guys, the Buy a Lady a Drink event was honestly the closest I got to making out with a star.

OK, so I didn't exactly accomplish my mission of making out with a celebrity. I couldn't find the Pump Rules cast for the life of me, which I'm still convinced was my way in. I did hear someone scream "Vanderpump Rules!" on the street one afternoon. I looked for signs and smoke signals in every direction, but I assume it was just a drunk person who had the same goal as me.

I will say the task at hand made a wonderful conversation topic, and it's funny how many people you just met will offer to help you accomplish your "dream." Even just having this mission in the back of my head made it feel effortless to strike up a conversation and meet new people, which was the most enjoyable part of this whole experience. And that, undoubtedly, is the better goal.