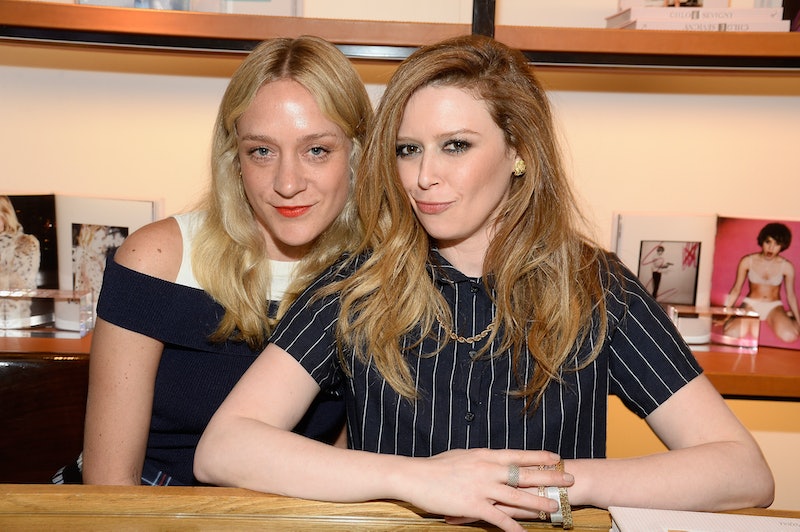 "We’re tired, and we’re on the hunt for crystal meth," says Natasha Lyonne, when she and Chloë Sevigny come over to greet me. She's kidding about the meth, of course, but as for the exhaustion, it's hard to believe she and Sevigny are even able to keep their eyes open long enough for our 15-minute chat. The actors are here at the Sundance Film Festival to promote a grand total of four films, and as they soon describe, their days have been spent in non-stop promotion mode. Not that either of them mind, of course; having so many movies debuting at the festival is, as Lyonne puts it, "a real holy sh*t feeling."

Especially when it comes to Antibirth, the duo's horror/comedy/fantasy/genreless new film, about a hard-partying woman (Lyonne) whose wild life spent alongside her equally drug-loving friend (Sevigny) comes to a quick stop when she discovers she's pregnant — with a baby that grows at an alarmingly fast rate. Directed by Danny Perez, a debut filmmaker best known for his hallucinatory visual art and work on trippy music videos, Antibirth is, for better or for worse, like absolutely nothing else, particularly in its themes of female empowerment and control over one's body.

"Something we’ve been talking about a lot is this idea of Rosemary’s Baby, and Mia Farrow being so vulnerable in that movie, such a victim, and this is the opposite," says Lyonne, adding with a laugh, "I really think of it like Denzel Washington at the end of Training Day."

And while the actor acknowledges that the wholly unconventional Antibirth won't be for everyone, both stars seemingly couldn't be happier to be a part of its creation.

"Natasha and I both have a history of working with first-time directors and new talent, people that have singular visions," says Sevigny. "And we want to be supporters of that — go out and live and try some wild sh*t."

"We’re really starting to feel like f*ck that, we’re the boys club, you know?"

The actors, who've been friends and co-workers for decades (they've made four films together, including 2003's Party Monster, another Sundance debut) have real-life temperaments that echo their best-known on-screen personas; Lyonne is loud and opinionated, while Sevigny is thoughtful and deliberate. So it's a surprise that when I ask them both if, due to films like Antibirth and Lyonne's The Intervention contributing to the larger-than-ever number of female-led films at Sundance, they've sensed a change in the way female actors and filmmakers are viewed in Hollywood, Sevigny is the first to respond with a decisive "no."

"The scripts coming my way, they are all male-driven, for the most part," she says, adding that while she's definitely noticed a transformation in some aspects, such as red carpets, it's not nearly enough to quantify as an actual sea change. Says Sevigny, "People are like, oh my god, I can’t believe they’re only asking the girls about their dresses. But it’s like, oh my god, I can’t believe we’re only having this conversation now."

Lyonne agrees, but she notes that the old "boys club" mentality of Hollywood has started to fade. "I feel it shifting a little," she says. "We’ve all wised up and caught on that the idea of competition between women is really one that’s brought on by advertising, by the male society... we’ve decided 'hey, how about this idea of us all being comrades in this thing and supporting each other and moving each other to be our best?"

Yet while both she and Sevigny are happy to discuss their involvement in female-led films – Lyonne produced Antibirth, and Sevigny just directed her first short film, Kitty — they, especially Lyonne, are cautious when it comes to labeling themselves as "female filmmakers" or any other gender-centric term.

"The very idea that we’re talking about stuff as being female is exactly the lame part of this whole situation," says Lyonne. "Like hey, you know, this is the f*cking show. This is the movie, the director, the producer... it’s just very weird, and it seems very outdated."

Although Sevigny nods in agreement, she counters that "in order to change it, you have to recognize it and vocalize it," citing Lyonne's "female-driven" Orange is the New Black as a prime example. Yet she's quick to criticize the different labels that male and female filmmakers get for the same behavior, saying that when it comes to decisive attitudes and strong opinions, "men can get away with it because they’re narcissistic. Women are just like, 'oh she’s batsh*t crazy.'"

"I feel like that’s why a lot of female filmmakers then have a hard time maintaining," she continues. "I can list off the ones that I’ve heard things, ones that have been fired from shows, or just not hired... You can’t be a female auteur."

Lyonne, unsurprisingly, puts it more bluntly: "The flawed piece-of-sh*t first time movies that a lot of these guys make and then they get to go on to make these huge second things... with women, it’s just like 'well, I’ll give the movie two stars and make sure they never work again.'"

The conversation gets somber, with both stars reflecting on the dire state of women in film... and then Kevin Smith walks in, apparently not realizing he's interrupting, to chat up Lyonne about her work on his film Yoga Hosers. As their talk gets going — Lyonne doesn't bother to alert him that she's in the middle of an interview — both become animated, falling into an easy, lighthearted banter (compliments about Smith's teen daughter's acting chops, a high-five shared after an, um, graphic discussion of The Human Centipede).

By the end, once Smith's been alerted of my presence ("hey, well, this is awkward") and the stars shake goodbye, it's as if the dreary end of our interview never happened; they're back to being Natasha Lyonne and Chloe Sevigny — friends, collaborators, and, whether they call themselves it or not, female filmmakers who have more important things to do than dwell on battles they're clearly already winning.

More like this
Chloe Pirrie Is Ready To Take The Next Step
By Sam Ramsden
At 14, Tatiana Maslany Was Obsessing Over Tamagotchis & The Spice Girls
By Gabrielle Bondi
Jonah Hill Explains How His Anxiety Attacks Will Change The Rest Of His Career
By Grace Wehniainen
Florence Pugh Won’t Discuss Harry Styles Sex Scenes In 'Don’t Worry Darling'
By Grace Wehniainen
Get Even More From Bustle — Sign Up For The Newsletter