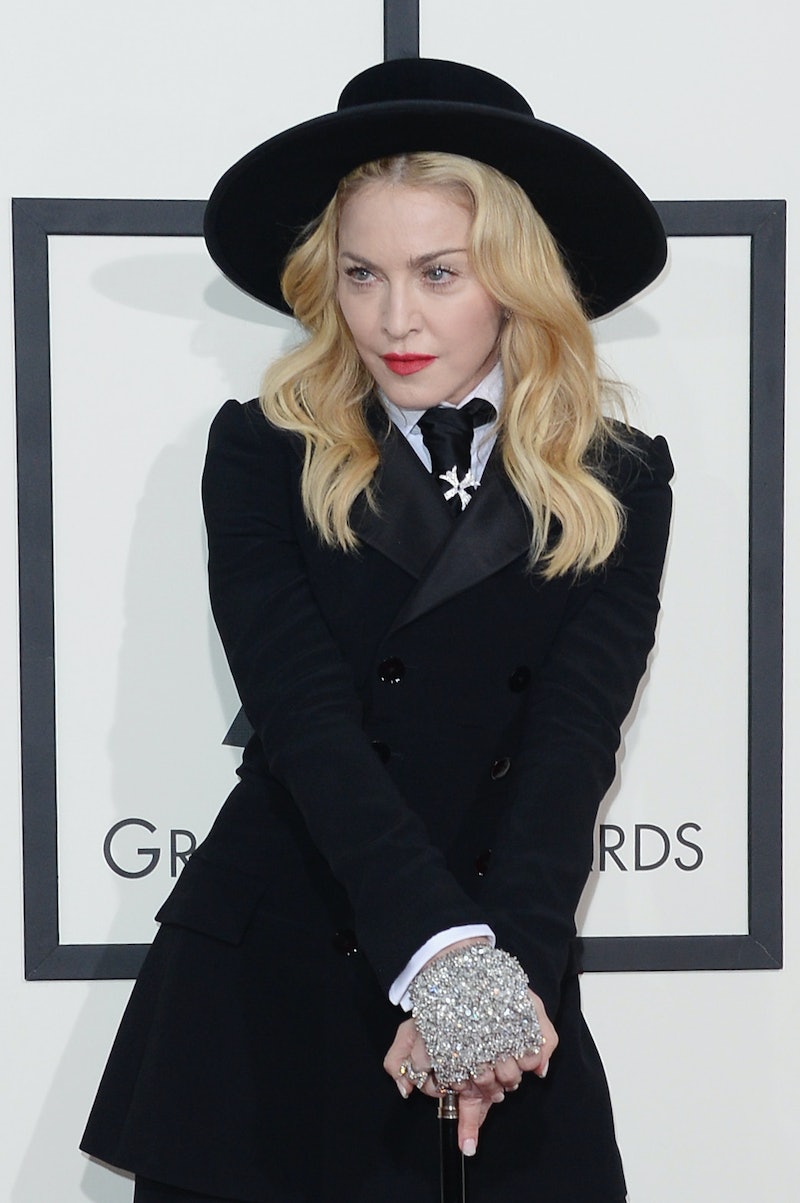 There may have actually been a more controversial fashion accessory than Pharrell’s hat at last night’s Grammys ceremony, Madonna’s grills. The original Material Girl walked the red carpet with her son David Banda while wearing a similarly comically oversized hat, a cane, and Ralph Lauren suit. As much as Twitter was blowing up over “Why is Madonna…” one of the many questions that continued to pop up was whether or not the grills in question were in fact racist.

A 55-year-old white woman donning an accessory famously tied to to the hip-hop community was no less problematic than Miley’s twerking, Lily Allen’s use of black back-up dancers, and Katy Perry’s atrocious AMA’s performance. But, for as many accusers Madonna had, there were just as many defenders.

Some called it a bold and boss move. Madge is longest-reigning queen of pop so she can sort of do what she wants, right? According to her she can. In fact, Madge herself said, "Yeah, I'm grillin'. It pisses everybody off when I wear my grill, so that's why I wear it."

Now we’re in some rough territory. As much as I’d like to celebrate that Madonna is a powerful woman, with her sort of hold and history, she has to take responsibility. And we can’t separate Madonna’s gender from her race. As many bold moves as she's made toward women’s sexuality and breaking gender norms, it doesn’t forgive her taking a piece of black culture “just because she can.” Yes, she is an influential woman and has successfully transformed her artistry for more than three decades, but she is also a white woman and the layers of her power are filtered through that. Isn't she established enough to not have to piss people off to earn attention?

The 2014 Grammys and the year in music that was 2013 raised many, many questions about the industry and race. One of last night’s biggest winners, Macklemore and Ryan Lewis, were at the center of a lot of that controversy; there was a lot of conversation surrounding their whiteness and privilege after the duo took home the Grammy for Best Rap Album. The two were also joined on stage by Madonna during their performance of “Same Love,” during which more than 30 couples of varying sexual orientations were married.

During that performance, we were facing two huge artists who have both been accused of exploiting black culture, making a grand statement about their support of gay marriage in America. The performance was as celebrated as it was deemed exploitative. Their gesture for gay rights does not outweigh their appropriate of black culture and both deserve their own examination. It’s a paradox to say the least, and one that can’t be summed up in 140 characters, as is too often done.

If Madonna’s grills have anything to say about the year ahead, then we are off to quite a rocky start.

Take a look at some reactions to her controversial accessory on Twitter:

So whether people were joking or being outwardly critical, it was clear that Madonna's grills were not well received. And she certainly did her job in pissing people off. But really, Madonna, is that how you're making waves these days? There are a lot better ways to be relevant than to be offensive.