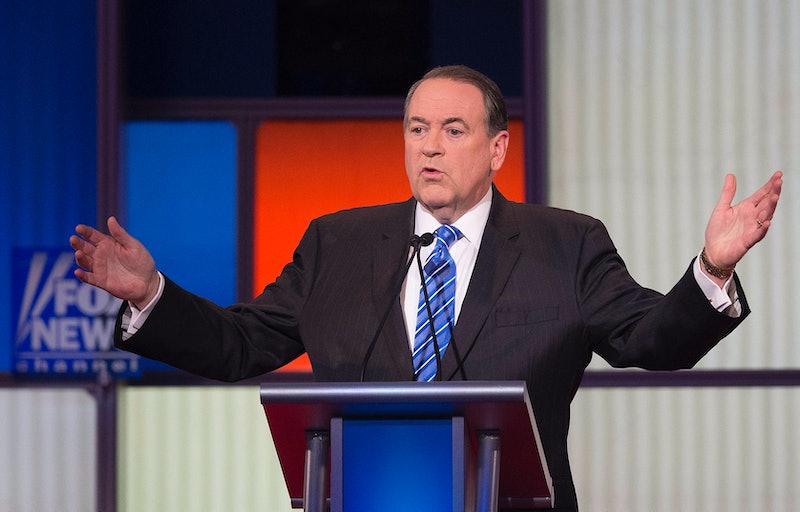 After he unsuccessfully tried to be hip by tapping Top 40s gold for his campaign this week, Mike Huckabee channeled Adele in his closing statement during Thursday's GOP date. Ahead of the last Republican debate prior to the Iowa Caucus, the former Arkansas governor and presidential candidate released a cover of Adele's "Hello," changing the lyrics to be about Iowa voters and a strange fake text exchange with Texas Sen. Ted Cruz. Due to copyright issues, the audio from the song has now been muted, but that didn't silence Huckabee at the debate.

"Well this week, there was a little dust-up about a video we put together with the music of Adele," Huckabee said during his closing statement Thursday night. "So I thought it'd be appropriate for me to begin tonight by saying, 'Hello, Iowa. It's me.'"

OK, so that was a pretty good response for a campaign tactic that completely backfired. What else are you going to do when you've been completely embarrassed inadvertently by one of the most popular singer's in the world? So, good on Huckabee's campaign staff (or maybe Huckabee himself!) for a reference to the song.

The song was posted just hours before the debate and was quickly yanked down by YouTube due to copyright issues. In case you missed Huckabee's, er, creative genius, here's a sample: "Hello, Sioux City. Hello from the caucus night. If Bernie wins I'm going to die. This crazy circus, it's gone cuckoo-cachoo. And Huckabee is the guy who's long overdue."

Uh, OK. First off, Huckabee, you're not running against Bernie Sanders. But now that you've gotten a little taste of that exercise in old dudes trying to be cool, we'll fast forward to where Huckabee states the absolutely obvious to Fox: "If I pick up my phone and I hear Adele saying, ‘hello, it’s me,’ I’ll take the call, you bet."

Of course you would, Mike Huckabee! You should enjoy any extra media attention that you're getting, considering that you were downgraded to the kid's table debate just days before arguably the most important appearance before the Iowa Caucus. The fact that Adele even knows your name now should be completely flattering. But somehow, we feel like Adele is somewhere doing something like this: