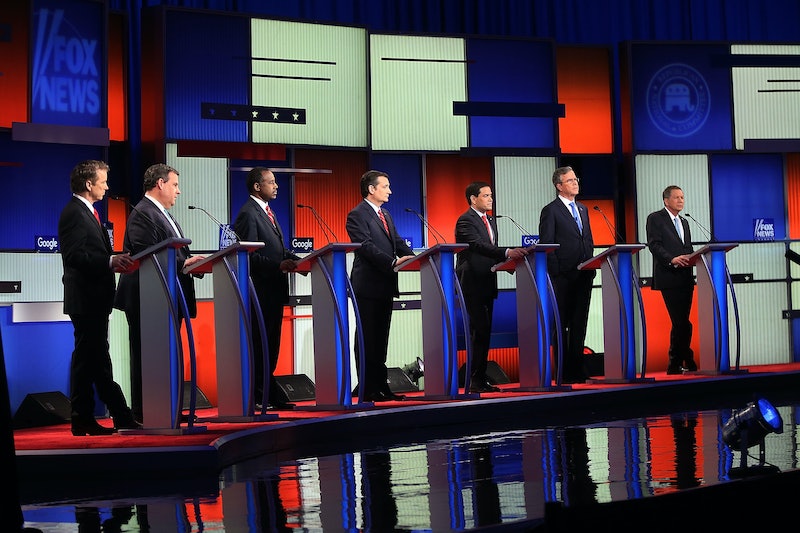 The seventh Republican debate is finally over, and Iowa voters will soon cast the first votes of the 2016 cycle. This debate had a much different tone from the previous six (!), largely because Donald Trump wasn't there. Trump, of course, decided earlier in the week to boycott the debate, essentially because Fox News was mean to him, and that gave the rest of the Republicans free rein to dominate the discussion. And yet, when the dust settled, it was abundantly clear that the winner of the seventh GOP debate was — you guessed it — Donald Trump.

When Trump announced that he wouldn't be attending the debate, the last before the Iowa caucuses on Monday, many speculated that this was either a political masterstroke or a massive blunder. To some, Trump was boneheadedly sacrificing his last chance to make an impression on Iowa voters and ceding the stage to the rest of the candidates. To others, Trump was throwing all of his opponents a massive curveball and monopolizing every bit of media attention the week before the caucuses. While you won't know for sure until Iowa votes, it's now looking as if the latter view is the correct one.

The signs were there from the outset. For one, the first two questions of the debate were about Trump (or "the elephant not in the room," as Kelly referred to him). Moreover, the first three candidates to speak — Ted Cruz, Marco Rubio, and Jeb Bush — all mentioned Trump in their first responses of the night. It's been clear for some time that Trump has the ability to dominate any room he's in, and we now know that he can dominate rooms he isn't in, either.

Now, this still could have been bad for Trump if the other candidates had spent the whole night relentlessly attacking him in effective ways. But that's not what happened. No one on stage lay a finger on Trump all night, and remarkably, nobody even really tried to. Rubio called him "the greatest show on Earth," and Bush, sarcastically, called him "a teddy bear." In other words, they stayed clear of criticizing the front-runner, and in doing so, they allowed him to continue being the front-runner.

There's another sense in which Trump won the debate, and that's the simple fact that Cruz lost. This was, without question, the toughest night the Texas senator has had on the debate stage so far, and suggests that there are indeed limits to his widely-recognized skills as a debater. First, he picked a petty fight with moderator Chris Wallace over speaking time and lost decisively. Moments later, he threatened to leave the debate if he got another "mean question," effectively legitimizing Trump's decision to skip the debate. In the same exchange, when he complained again that the moderators were being too hard on him, the crowd unanimously booed him.

This was the last debate before the Iowa caucuses. Cruz and Trump are polling neck-and-neck in the state, and more importantly, nobody else is anywhere close. It is, then, a zero-sum game. When Cruz loses, Trump wins, and vice-versa. This was a bad night for Cruz, and that made it a good night for Trump.