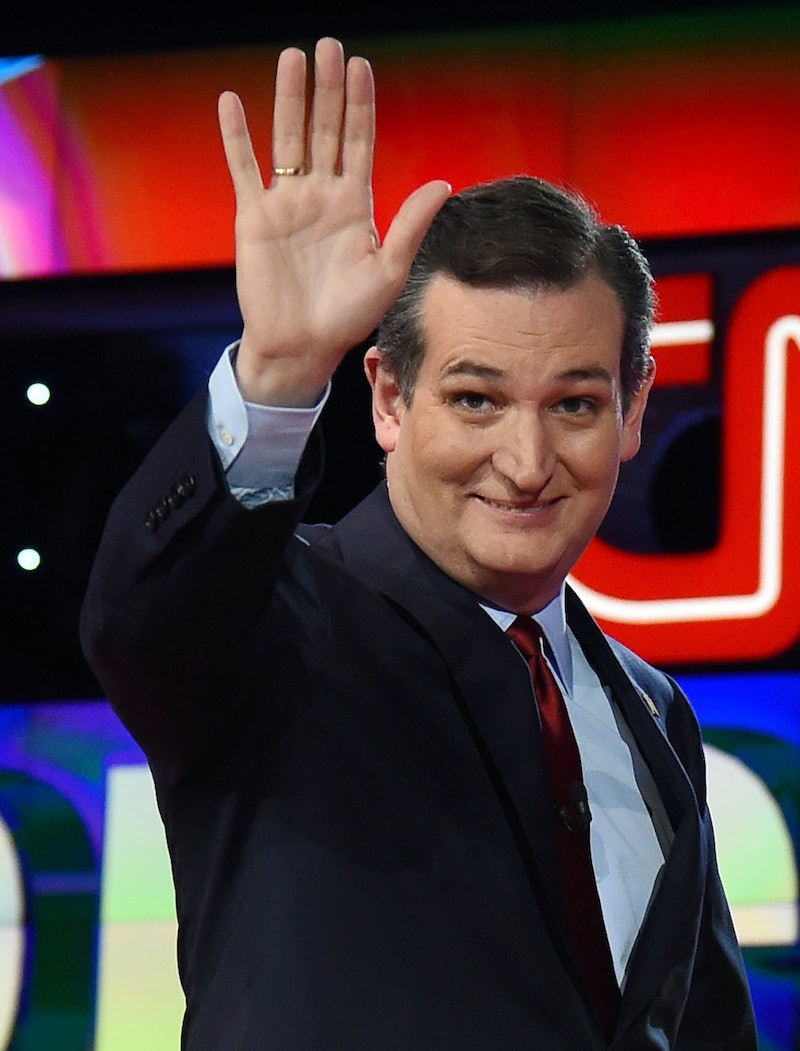 During Thursday evening's Fox News debate, Ted Cruz was the first to address Donald Trump, aka the elephant in the room, by first calling himself a maniac, and adding that "everyone on this stage is stupid, fat, and ugly." He also told his opponent Ben Carson: "You're a terrible surgeon." The room fell in a sort of hushed laughter until Cruz clarified that he was in fact channeling Trump, who chose to bow out of the night's GOP debate on the account that moderator Megyn Kelly might be mean to him.

"Now that we've gotten the Donald Trump portion out of the way," Cruz said, momentarily trailing off to thunderous laughter and applause from the audience, "I want to thank everyone here for showing the men and women of Iowa the respect to show up and make the case to the people of this state and to the people of the country why each of us believe we would make the best Commander-in-chief."

It was a hilarious move that called Trump out in perhaps what was the best way for both his fellow contenders and Fox News: by making him the butt of the joke, Trump became all but irrelevant in the face of candidates who have been trying, without much success, to best the ever-surprising business man.

With the Iowa caucus drawing closer by the day, it seems that conservatives, including Fox News, have taken a no-holds-barred approach to Trump. Even the network news station got in on the act when Trump announced that he would not be attending the debate, issuing a sarcastic response that suggested the candidate would consult his Twitter followers before attending any meetings as president.

Trump's feud with Fox News originally started last summer, after facing supposedly difficult questions from the network's moderator Megyn Kelly during a debate. Trump claimed he was treated unfairly, and then began to wage a war that seemed to only have one real casualty: Trump himself. This led to a series of arguments against Kelly and the network, ultimately influencing his decision to not participate in Thursday evening's debate.

So instead of taking the stage, Trump focused his efforts on a rally for veterans held simultaneous to the debate. If Trump wasn't going to be at the debate, this at least seemed like a valid, if not a little self-congratulatory, use of his time. He even set up a website, donaldtrumpforvets.com, to collect donations. However, when prompted to donate on the rally's corresponding site, a disclaimer shows that the money will in fact go to Trump's personal foundation, as opposed to actual veterans' groups. Some veterans groups have flat-out said they will deny any donations from Trump were he to offer. What's more, a 2015 report by Forbes found that Trump's personal foundation has actually given more to the Clinton Foundation than it has any veterans group.

Given Trump's abysmal track record with veterans alone, and his attempt to seemingly use them as political props in his boycott of Fox News' debate, Cruz was absolutely in the right to call out the GOP front-runner. Though the other GOP candidates aren't without their various flaws, the debate still benefited in the absence of all of Trump's usual noise.