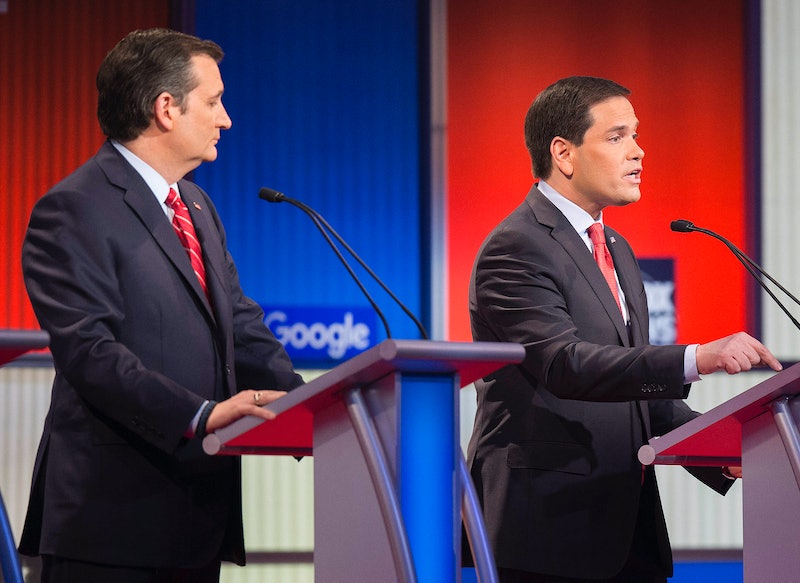 During Thursday's seventh GOP debate, Fox News moderator Megyn Kelly passed over John Kasich for Marco Rubio during her questioning, proving that debates are more focused on the prominent candidates on stage. When Kasich desperately wanted to comment on foreign policy, Kelly didn't let him, giving the question to Rubio instead. With Rubio polling in third place and Kasich rolling in at seventh, Rubio's answers were of more importance to the audience and voters.

Poor Kasich wanted to get a word in and Kelly just wouldn't let him — at least not until a little later. After Rand Paul weighed in on how America should handle the conflict in Syria, Kasich wanted the chance to comment on the subject as well. The moderators explained that more questions on foreign policy would come up later, but Kasich really, really wanted to speak his mind right then. When the Ohio governor finally backed off and let Kelly continue with her statement, after a lot of interruptions and the two awkwardly trying to speak over one another for a while, Kasich said: "I've always listened to you, Megyn. Go ahead." Kelly responded with a smile: "You're a good man, Governor Kasich."

After ignoring Kasich's plea for attention, Kelly asked Rubio if his position on wanting to close down mosques to limit radical Islam goes against the First Amendment. Kasich didn't get another question for a while, but when he finally did, Kelly jokingly said: "Governor Kasich, stand back."

Of course, the moderators were on a strict schedule and pressed for time, so it was sometimes necessary to cut off the participants and move on to the next question. However, it seemed like Kasich was blown over to give more time to a candidate more likely to win the Republican nomination at this point in the election.

Though Kasich was on the primetime debate stage, unlike four candidates who appeared in the undercard forum, he still wasn't one of the top three contenders, like Rubio. Giving more attention to the candidates more likely to do well in the primaries is a pragmatic approach and avoids wasting time on candidates who probably aren't going far. Nevertheless, Kasich felt the neglect when he was passed over for Rubio and clearly wanted more opportunities to jump into the conversation.

More like this
Michigan’s Governor Is “Going To Fight Like Hell” To Protect Abortion Access
By Andrea Zelinski
LGBT+ Men Fleeing Afghanistan Were Denied Asylum By The Home Office, New Findings Show
By Sam Ramsden
Cardi B Explains To David Letterman Why She Uses Her Star Power For Politics
By Jake Viswanath
What Is Barack Obama’s Net Worth? He Makes *Way* More Now As An Ex-President
By Hugh McIntyre
Get Even More From Bustle — Sign Up For The Newsletter