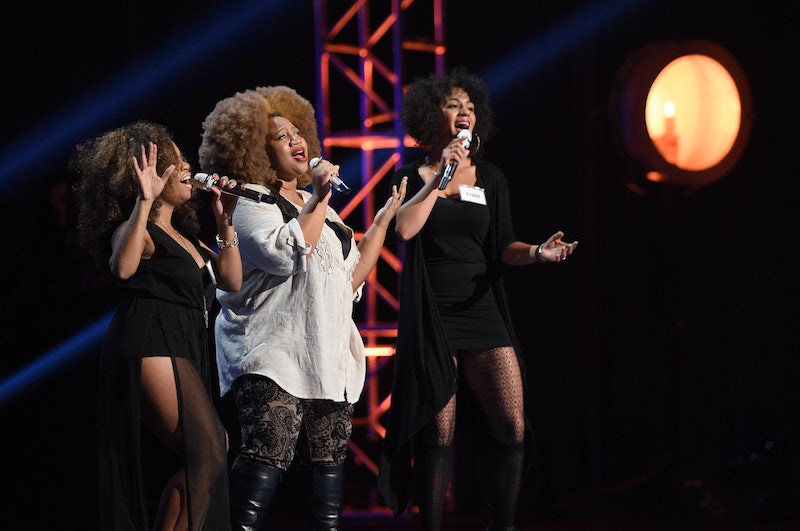 It wouldn't be a decent Hollywood Week on American Idol if someone didn't forget their words. While some crash and burn when this happens, 24-year-old Marlena Johnson didn't let her lyric slip bring down her team. "The Sistas," made up of Johnson, La'Porsha Renae and Tonie Starr, took the Hollywood stage with "Stayin' Alive." The girls got a little shaken up after the team before them forgot the words to the same song. But, instead of letting it get inside their heads, they used it to motivate them to do better. And do better they did. Despite Johnson's mistake, the girls pulled together an amazing performance and earned a pass to the final round of Hollywood Week.

Getting to the group round stage wasn't easy for The Sistas — the three girls didn't even start out in the same group. The group started as Johnson, Starr and a third member, Shelbie Z, who abandoned them to join another team after rehearsing for a few hours. Facing disqualification for having too few members, Johnson and Starr were desperately searching for a third singer. That's when Renae came to the rescue. After hearing the girls story, Renae knew she had to help them out, so she abandoned her original team to form The Sistas with Johnson and Starr.

With little time to spare, the girls came together to pull off an amazing performance. Their vocals were strong and their confidence was palpable. Even when Johnson forgot her words, the trio barely missed a beat. Johnson riffed for the duration of her phrase and her team members brought her right back into the song. The judges were impressed with both their professionalism and talent, and awarded them with a pass to the next round. Be prepared though, ladies. This kind of mistake isn't going to fly next week.