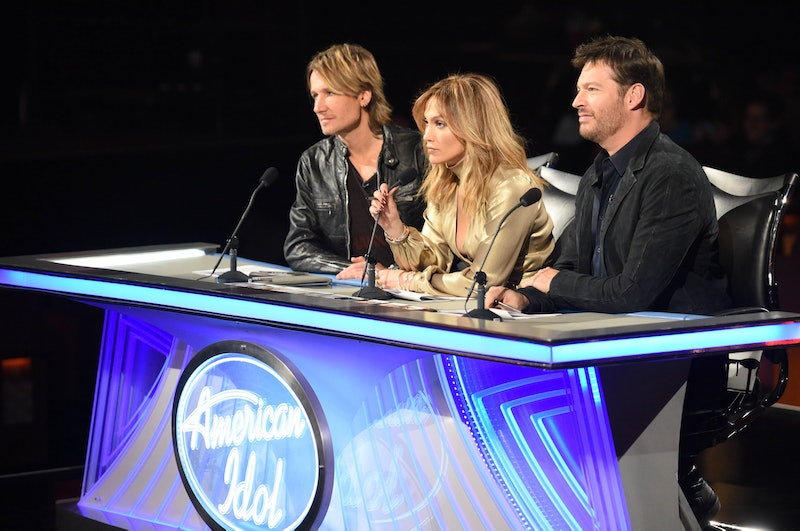 Is it just me or are the American Idol judges are being unusually nice this Hollywood Week? Group after group is being let through to the next round, even if they don't necessarily deserve to advance. One group that definitely earned their ticket through, though, is the Trick or Treat Tribe. The male quartet performed a cool rendition of Bruno Mars' "Uptown Funk." And while their vocals were on point, it was their dance moves and performance skills that won over the judges. The Trick or Treat Tribe brought the group rounds to the next level, and certainly earned their right to advance as a group.

The Trick or Treat Tribe was made up of Marcio Donaldson, Jon Klaasen, Kylle Thomasson, and Kacye Haynes. Klassen and Haynes stood out in their initial auditions as being contestants to watch, but Donaldson and Thomasson quickly earned themselves a spot on that list during tonight's performance. Each member of the group was equally talented and, because they all shared the spotlight, each man's talent was able to shine through. With their strong vocals, smooth dance moves, and team spirit, the guys came together to deliver a killer performance, which helped them succeed as a team. Not only was the Trick or Treat Tribe one of the strongest teams of the night, they also had one of the best performances and they rewarded the best way possible — by advancing through as a group.

So where does the Trick or Treat Tribe go from here? Will the guys perform as well on their own as they did tonight? Most likely. Each man had an equal opportunity to show off his skills tonight, and they all proved to be very talented. As long as they have enough self-confidence and stage presence to perform alone, there's no doubt that Donaldson, Klaasen, Thomasson, and Haynes will all be in this competition for a long time.