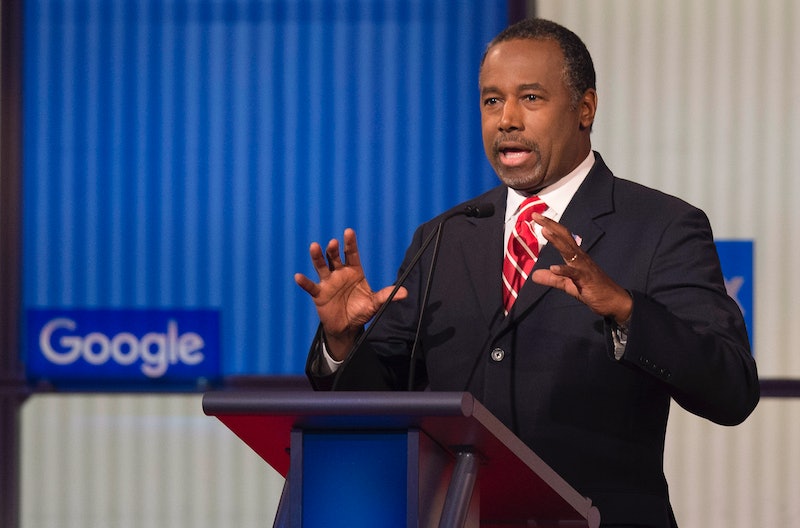 Well, that's it! You just knocked back another Republican presidential debate, and it was... well, a little lifeless, what with the absence of GOP front-runner Donald Trump. But we did get a little testy back-and-forth energy every now and then: between Marco Rubio and Ted Cruz, between Rand Paul and Ted Cruz, and between, well, basically everyone and Ted Cruz. One candidate, however, turned in one of his typically sleepy-eyed, laid-back, just-happy-to-be-there performances ― what the hell happened to Ben Carson, the one-time Republican contender?

It's easy to forget nowadays, so many months after his surge in the polls, but Carson was actually the chief challenger to GOP front-runner Donald Trump as recently as late October and early November. It's true! Despite briefly pulling into contention right alongside Trump with polling numbers solidly in the 20s, the whole thing started to crumble almost as soon as it began. Now, Carson sits at just 7.6 percent in the upcoming Iowa caucuses, which would slot him in at just fourth place behind Trump, Cruz, and Rubio.

So, what exactly caused Carson's precipitous decline? You could probably sum it up as simply as this: He didn't know enough, wasn't present enough, and didn't have the public speaking chops to hold off a field full of established, polished politicians. And also, as the seventh debate on Saturday night revealed, he's got a rough way with words.

Carson's candidacy was probably always more about persona than portfolio ― the same impulses in the Republican base that have shot Trump to the front of the field, albeit manifested in a softer-spoken, more personally agreeable style. At his core, Carson remains what he's always been: a non-politician, a seemingly affable and likable guy, and a strong representative of the socially conservative religious right. He's the kind of candidate who can warn you about how Obamacare is the new slavery, and invokes same-sex marriage alongside pedophilia and bestial marriage, but he says it in such a warm, soothing tone that your objections just melt away.

Sadly, all the dulcet tones in the world can't bail out a sinking ship, much less when you don't have uniform support within his own campaign. Just prior to the new year, his campaign suffered a mass exodus, leaving his campaign seemingly under the thumb of his longtime friend and adviser Armstrong Williams, a noted non-politician who's extensive role has reportedly irked Carson's hired staff. When news broke of the staffer departures, one of them, Barry Bennett, told the AP:

You have to surround yourself with good people. And he hasn't demonstrated that he can do that. No one wants Armstrong Williams anywhere near the Oval Office.

That pretty much says everything you need to know. When a candidate's own people are jumping ship because they doubt his judgment in character and management, you're done. Fundamentally, Carson continues to be what he always was ― the serviceable anti-establishment anti-Trump, a true outsider with an impressive biography, and a soft-spoken style to boot. But when some aspiring campaign strategists someplace are doing the postmortem on his primary effort, the reasons he failed will be pretty transparent: He seemingly couldn't hack it on policy, and when it came to the debate stage, he never seemed to try enough. Quite the contrary ― when he wasn't coughing up a lung, he was coming dangerously close to catching a snooze.

It speaks volumes that there really hasn't been a singular moment for Carson in any of the debates that left a more lasting impression than that sleepy, unsteady reputation did. You could make the case, in fact, that Carson's entire debate experience fails even to live up to the hilarious impression of him done by SNL's Jay Pharoah ― eyelids at half-mast, hands folded neatly and awkwardly at his chest, that soft, airy voice.

Simply put, in a primary race that seems to be valuing gusto above all else, Carson really never stood a chance. He won't be remembered as negatively as some candidates in this election cycle, surely ― he's a cuddlier figure than most of the people on those main debate stages, and his long career as an esteemed, brilliant brain surgeon will still be remembered and saluted, and will loom large in his biography. But the sooner Ben Carson gets out of this thing, the better. No sense throwing good money after bad, after all.