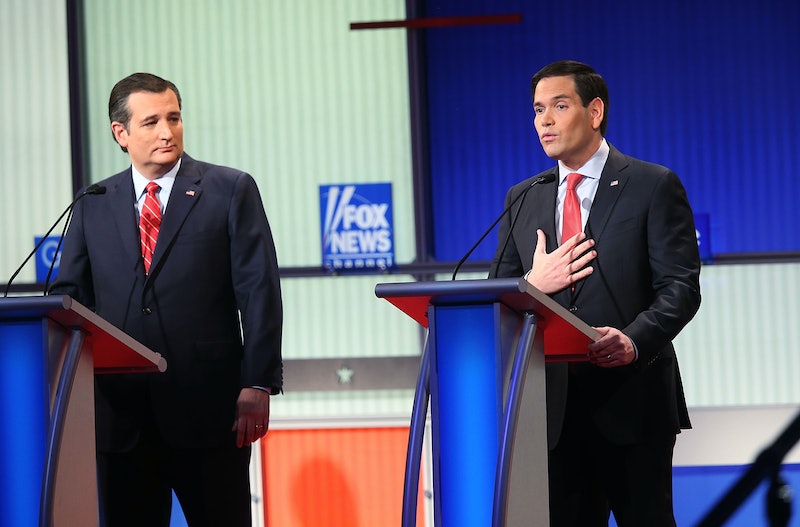 A lot was said at Thursday night's Republican debate hosted by Fox News and Google. Hey — it was hard not to get a large chunk of speaking time with nearly two-and-a-half hours of debate to go around. That is unless you're candidate Ben Carson, and you're so out of the loop you forget you're actually supposed to talk at the event. Of all the outrageous policy proposals and sly digs at other candidates, there was one that really summed up the evening's showdown. Here's the one quote from the GOP debate that's really all you need to hear to understand how the round in Iowa went down.

The line of the night, which came from Florida Sen. Marco Rubio, won't make complete sense without a bit of context. What the majority of the general public likely already knew going into Thursday evening was that leading Republican candidate Donald Trump decided on a big fat "no" for the debate RSVP card. The billionaire instead hosted a fundraising event for veterans just down the road from the debate venue in Des Moines.

For those who didn't tune in for the seventh primetime round, it should be noted that Trump wasn't the only one to talk about skipping out on the debate.

Following a few questions by the debate moderators that made reference to candidates' previous criticisms of Ted Cruz, the Texas senator threatened to walk right off the debate stage:

Come on, guys. You've got to keep it together!

Cruz may have tossed out the warning in an effort to poke fun at Trump's absence, but it didn't really come across that way. And that's when Rubio snapped up the opportunity to look like the mature one by providing Americans with a plate of reassurance that he wasn't going anywhere, extra sauce on the side. Said Rubio:

First of all, I'm — don't worry, I'm not leaving the stage no matter what you ask me.

With that one sentence, Rubio pulled off a double dig that made opposing candidates Trump and Cruz look foolish. At the same time, the statement demonstrated an assertiveness on Rubio's part that had seemed to fizzle out during the candidates' last debate. Who wouldn't hear that clever comeback and come away wondering, "Has Marco been America's rock all along?"

No, not that Rock. But close.