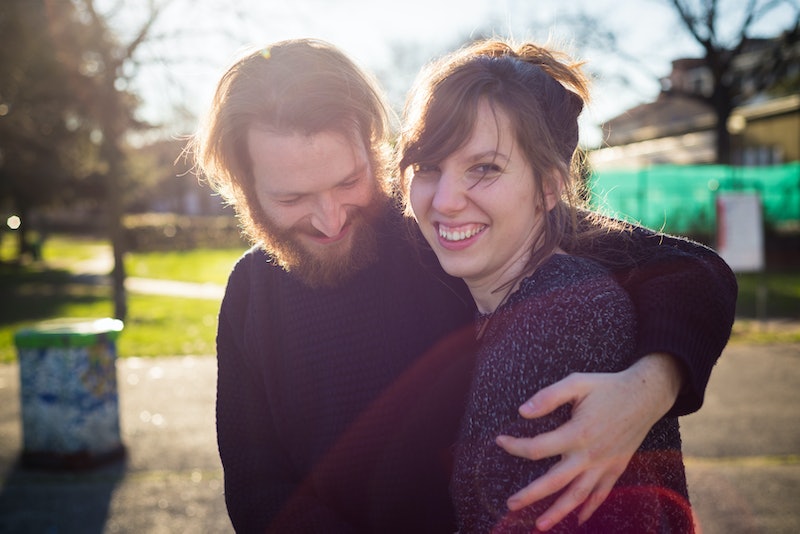 Saving money is about as thrilling as a root canal. But there are plenty of levels between a root canal and the best night ever, and somewhere in between are hidden ways to save money on dates. Once you get in the habit of it, being frugal on dates can become second nature, and doesn't have to be boring or unpleasant. In fact, Karenna Alexander, a dating coach and matchmaker based in NYC and Connecticut, tells Bustle that there are tons of ways to cut corners and keep costs to a minimum without sacrificing a sweet moment or a lovely night on the town with your partner.

In general, the more you can focus on having fun with this fabulous person with whom you're going on tons of awesome dates and the less you can think about all of the things you might miss if you don't spend a lot of money, the better. Having fun is not about spending money. If you're going out with someone, and you're happy, really, who cares what you're doing? I often have the most fun with people when I'm just sitting across the table, talking about life. And that doesn't cost a thing. Here are seven hacks for keeping costs down on dates.

I know it's fun to go to fancy restaurants, but you know what else is fun? Getting super dressed up and hitting a hole in the wall. As Alexander says, "Dinner dates don't always have to be at pricey restaurants." Indeed. If you want to take it up a notch, find a cheap restaurant that also has some pizazz to it. "Inexpensive restaurants that are trendy and hip can be just as satisfying and fun." So hit up Yelp, find the best burrito place in your nabe, put on a pair of heels or some lipstick or whatever counts as dressing up for you, and make a night of it.

In a column about saving money on dates for JDate, Jackie Kaplan points out that there are always tons of coupons out there for cheap dinner on the fly. And if your date ain't down, that gives you some more information about them. "If the prospect of dining out on a discount is scoffed at, then you just got a useful insight into your date’s views on money," says Kaplan. "To find coupons for local restaurants, try the websites Groupon and LivingSocial."

Wherever you wind up for dinner, whether it's a hole in the wall, a cheap 'n chic restaurant or a nicer place that takes coupons, "for after dinner entertainment, a walk under the moonlight with the one you love can be just as special as front row tickets to Phantom of the Opera," says Alexander. Rather than making a huge deal out of every date, take a long walk after you eat and talk. You'll be able to exchange stories, and you'll get a little exercise too.

4. Think Outside The Box

Rather than doing the ol' dinner-and-movie routine, try something you don't usually do, suggests Kaplan. On the top of Kaplan's list: mini golf, a beach picnic at sunset, a low-cost or free museum and bowling. "Apart from being cost-effective, these date ideas all share something else in common: They’re all original," says Kaplan. "Show your date something unique and save some money at the same time."

The fewer drinks you buy, the more money you save. Pretty simple. Kaplan points out that "bars and restaurants often charge a ton for drinks," so if you're trying to keep money-spending to a minimum, it's best to err on the side of sober. There's an extra benefit to this: "The less the two of you drink, the more you’re going to get to know each other’s genuine personalities," Kaplan says.

You're allowed to voice the fact that you don't want to — or can't — spend a lot of money on dinner. Pipe up and "suggest a less expensive" date, Kaplan writes. Especially early on, if your partner balks, it's better to know now. "If your date is a spender rather than a saver, it’s not only going to cost you more money now, but in the future as well," says Kaplan.

7. Whatever You Do, Be Upfront

If you're dating around, don't try to make your dating profile look like you're a major baller if you're not. "If you don’t make $100,000 per year," don't try to make it look like you do, Kaplan writes. "While it may be tempting at the get-go, you’re only setting yourself up for failure." Bypass the whole thing altogether and don't mention your salary at all, and "let your date learn about who you are based on what you have to offer emotionally and intellectually, not financially." Boom.