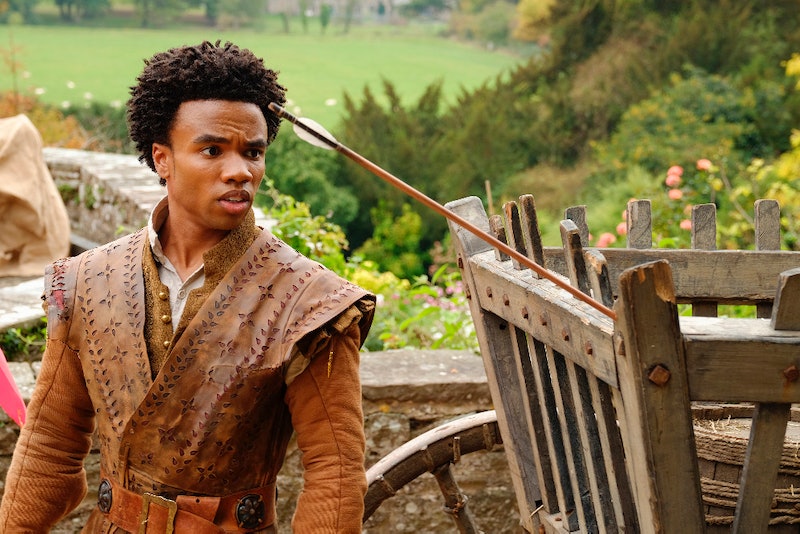 The season finale of Galavant is Sunday, and I'm already looking toward the future. I was so delighted when this musical comedy was renewed for Season 2, and I'm hoping that ABC plans to keep it on for another year as well. There are so many places that this show can go with its characters, and actor Luke Youngblood has some Galavant Season 3 ideas for Sid that makes the prospect even more exciting.

Luke Youngblood, who also had a recurring role on Community as Magnitude, has had success with comedies that really take risks and don't care what anybody thinks. I would be remiss not to point out that he played Lee Jordan in the first two Harry Potter films; that's also where you know him from, nerds! On Galavant he plays Sid, Galavant's squire, and friend to all. What adventures could Sid go on next, after rallying troupes, accidentally killing Galavant, and teaching Gareth all about the bro code? What sort of songs could he sing next if the series is renewed?

"I think I would actually quite like to have a ballad," Youngblood says, "a duet or something. Just because I haven't done one of those in the show yet. I think everybody else has had one, whereas Sid's kind of always been part of teams, the jokey songs, and although I had a massive Les Mis moment, I think I would kind of like to slow it down a bit and maybe get a little bit more romantic with it. Season 3 will be good for Sid to find some love somewhere."

That's an excellent point. All of the other characters on Galavant have found their one and only, or one of many, but not Sid. No fair! What else would Galavant Season 3 hopefully be like? "Ten times bigger and ten times better," Youngblood says, for starters. "This season, all of us were in places that we didn't necessarily want to be. It was interesting to see how the characters interacted and how our paths have crossed and things like that along the way. I quite like all those different storylines where everybody's on their own journey but at the same time you get some unusual pairings. So maybe I would be paired up with King Richard and Roberta next season, or maybe I'll be best friends with Queen Madelena, or something like that. I just like the surprise element there."

Of course, this is all speculation — and no spoilers for the Season 2 finale, either. "Our writers have got some good ideas at the moment but they're keeping hush hush about it," Youngblood says. "So I have absolutely no idea what they would do!"

Personally, I don't see why ABC wouldn't renew the series for Season 3. I think this model, with shorter seasons of shows like Agent Carter and Galavant running during midseason while other primetime shows are on hiatus, is very smart. It gives audiences variety all year 'round. Plus, as Youngblood points out, they've got Alan Menken on their side as a composer, and he "wrote all of our childhoods, basically." How can you say no to 90s Disney royalty? Fingers crossed for Galvant Season 3, for the sake of Sid's love life, at least!