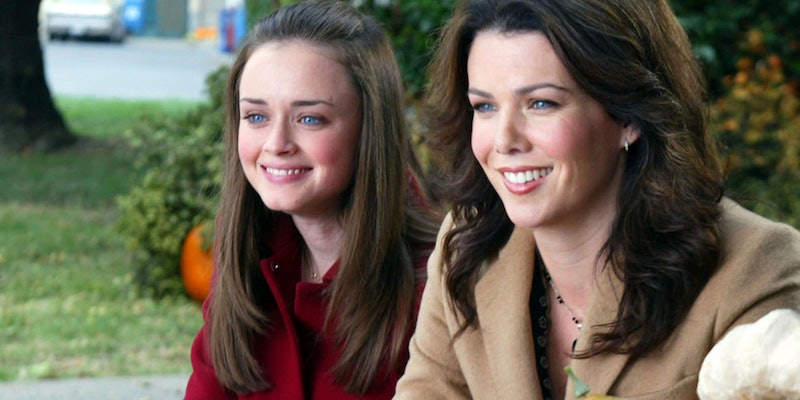 The girls are back! As in, the Gilmore Girls Netflix revival is happening. Oy! Is it a dream? Is it real life? Who knows. But the gang's all here, the coffee IVs are currently getting filled, and we're all on the edge of our seats. According to Deadline, Alexis Bledel, Lauren Graham, Scott Patterson, Kelly Bishop, Sean Gunn and Keiko Agena have thus far been confirmed as a part of the revival. (Jury's still out re: Milo Ventimiglia, but my fingers have been crossed for almost 14 hours now, so I have a good feeling about it.) And, as if that news wasn't exciting enough, Graham — who portrays the beloved Lorelai Gilmore on the series — has just shared even more information about the upcoming revival series with fans.

Graham had an interview with TVLine on Friday, post-official revival announcement, and boy, was it full of important one-liners. After finishing up a table read for the first installment of the series (titled "Winter") Graham answered some pretty important questions, and she did so with such palpable enthusiasm that it almost hurts. Here are some of the best snippets from Graham's interview that will get you so excited for the premiere, you might not be able to handle it. You've been warned.

"We had to do a camera test and… the house. [She gets choked up] It’s on a different stage but it’s… the house." Guys. It's the house.

2. On Her Emotions Being Your Emotions

"I feel super emotional about a lot of it and I’m afraid I’m going to start crying at every turn." Honestly, same. (Read: have already cried three times.)

3. On The Passing Of Time

"It felt like a lot of time had passed and it felt like we were just there." How all of us are feeling right now.

"There’s a line [in the script] about how time has passed and how that feels… and hanging over all of it is the absence of Ed [Herrmann, who played Gilmore patriarch Richard], which, obviously the [revival] addresses." I think fans will be happy to know this will be a part of the episodes.

"But more than anything, we just can’t believe it. All of the things that had to happen for this to happen." I never stopped believing, Lorelai. Never.

"Netflix had to be invented." It's true. Thank you Netflix, for making this all a possibility.

"Amy sent me the scripts and I gobbled them right up." So they're good, right? Like, really good?!

8. On The Scripts Being Old Friends

Graham explains that reading the scripts was kind of like running into someone you used to go out with, but without any of the negatives. "It's like, 'Hey, old friend! I’m happy to see you.'"

9. On The Script's Lengths

"I haven’t read the last one. We just got it. They’re looong. [Laughs] I read 'Winter,' 'Spring' and 'Summer.'" Suggestion: Split them up? Do more than four episodes? Food for thought.

10. On Emily and Lorelai

"I read a scene with Kelly [Bishop, who plays Emily] today… and it was just completely alive." Ah, the mother-daughter dynamics of Emily and Lorelai.

"And there’s definitely some resolution that we didn’t get [at the end of the series’ original run]." Thrilled to hear this sentiment.

For those who don't remember, Gilmore Girls series creator/writer, Amy Sherman-Palladino planned out the last four words of the series long, long ago — but they were never given air time during the series finale because she exited the show before the episode aired.) "I asked her [Amy], “Who says them?” And she says, “Both of you.” That’s all I can say. It’s not, you know, in unison." THIS IS HUGE.

13. On Being Happy With Everything

"I was completely satisfied with these scripts. It’s what I hoped it would be." *Tearing up*