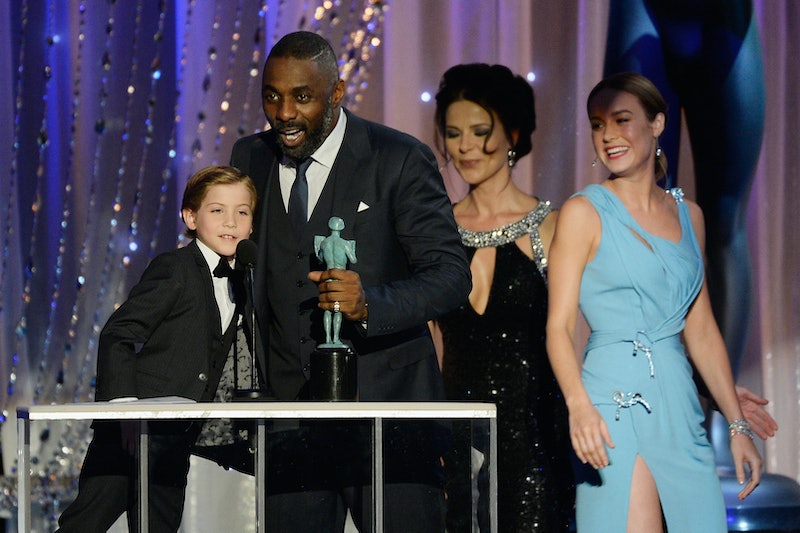 Over the course of this year's awards season, Jacob Tremblay, the nine-year-old star of the movie Room, has become something of an awards season hero. He's cute, he's polite, and funny, and whether he's on the red carpet or accepting a trophy, he's consistently the best part of 2016's biggest Hollywood events. Perhaps the star's true knack for awards shows comes from his talent for knowing how to turn it on when it needed. As he recently revealed to London Calling, he's no stranger to getting emotional when required, saying, "How I cry on cue is I think of sad stuff to get the tears going in my eyes, but then I hold it in. I go to set and when I’m supposed to bawl, I just let it out." Clearly, this knack for accessing his emotions and playing to a crowd has helped him bring it 100% at this year's awards shows.

But in spite of his professionalism (Tremblay has been acting since he was a baby), he is, after all, just a kid who, he told Variety, prefers "Legos, wearing costumes and jumping around the house" to donning a tux and giving interviews. This combination of seriousness and silliness has allowed Tremblay to make quite the impression on everyone from Jonny Depp to Will Smith over the last few months, showcasing his remarkable charm around movie stars and audiences alike.

1. When He Won His First Ever Award

"This is really something," he told the audience at the National Board of Review Awards. "The mind of me right now is so blown."

2. When He Presented At The SAG Awards

"I can still remember the first time I got nominated for a SAG Award," he joked on-stage. "I was only nine years old, and I was competing against Batman."

3. When He Won A Best Young Actor Award But Was Too Short For The Mic

That's some solid improv right there at the Critics Choice Awards.

4. When He Told Everyone Where That Award Would Go

"I know where to put this: on the shelf, right beside my Millennium Falcon."

5. When He Killed It On An After-Party Dance Floor

Looking forward to his appearance in the reboot of the High School Musical franchise in 2021.

6. When He Said That He And Johnny Depp Are "Best Friends"

In addition to Depp, Tremblay counts Room co-star Brie Larson as a BFF. He explained to People that their first meeting took place at a pizza parlor at which he brought his Star Wars legos, telling the magazine, "She likes Star Wars like me. So that's why we’re best friends."

7. When He Finally Met His Hero, Leonardo DiCaprio

At this rate, by the time Tremblay is DiCaprio's age, he'll probably have an EGOT.

8. When He Talked About His Parents' Handling Of His New Fame

"They just laugh about it," he told Entertainment Tonight's Nancy O'Dell. "It's kinda funny, 'cause now my mom calls my dad, 'Hot Dad.'" She's certainly not alone.

9. When He Revealed His Future Presidential Running Mate

Spoiler alert: It's Steven Spielberg, whom Tremblay met at the AFI Awards earlier this year.

10. When He Called Larson "The Coolest Girl In The World."

11. And When Tremblay Jumped On A Chair To Give Larson A Standing Ovation For Her Golden Globes Win

"He came and tackled me after I won, which made me cry," Larson later revealed to The Hollywood Reporter .

I'm looking forward to watching Tremblay top his own cuteness when he presents at the Oscars.