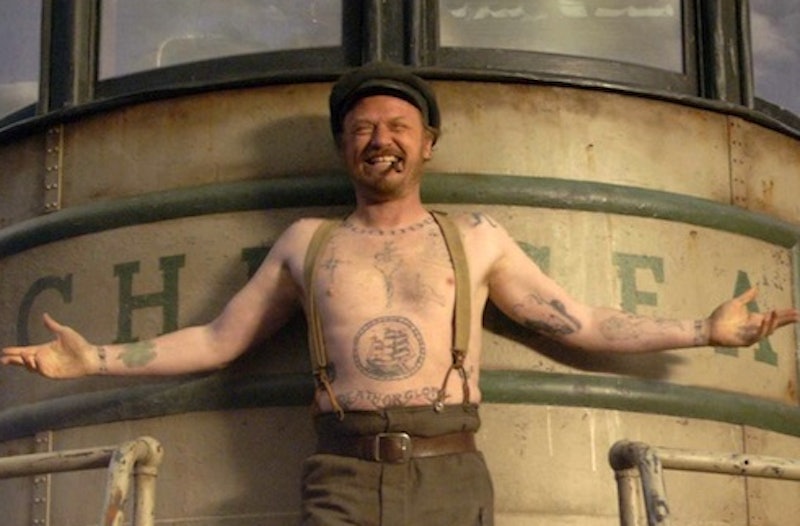 We've seen our fair share of tattoo trends these last few years — everything from hair tattoos to giant sleeves. But today, we might just have a new look rolling out onto the scene: Antique tattoos, otherwise known as "grandpa tattoos."

So what exactly is that? What kind of tattoos are our grandparents sporting underneath those house coats and sweater vests? To help you picture things better, just think of what your granddad might've gotten if he was in the U.S. Navy in the 1940s or '50s. Are images of pinup girls, emblems, sailing ships, roses, or random retro-ness coming to mind? Well, that's exactly what is in vogue right now. According to Mashable, military tattoos are really having a moment. The publication explained, "Grandpa tattoos draw heavy inspiration from the military tattoos popular in the 1940s and '50s, which involved having regimental crests and numbers tattooed on arms."

Not only that, but pinup girls sitting all perky-like on anchors, retro swallow bird tats, and anything else you might imagine on a sailor's arm are totally in.

Mashable reported, "However, it's not all military-style tattoos when people go grandpa with their ink. 1950s pinup and quirky bird tattoos are also rising in popularity, says Hardy, one of four tattoo artists being profiled by the Museum Of London for its Tattoo London exhibit, which is getting under the skin of the city's tastes."

As old favorites like ships and anchors are being requested more and more, we're also seeing a Naval retro boom. And while it's arguably beginning to reach its peek right now, it's been slowly gaining steam for years. According to The Guardian, retro Naval tattoos have been gaining popularity since 2013. The publication described the style in glorious fashion: "The look is very much that which might have graced the biceps of tough postwar sailors who docked their tramp steamers in Pacific ports and drank rum all the way to the tattoo parlor." That description alone might make you want to head to an ink shop right this moment.

In case you're eyeing your keys and thinking that you just might take the plunge, here are some examples of those grandpa tattoos that are very much trending right now.

Curious about what other tattoo trends will have people running to get inked in 2016? Here are three trending ideas, according to online tattoo culture site Inked.

Not ready to get a full sleeve or a giant quote running down your back? Inked believes that's exactly why minimalist tattoos will explode in 2016. Inked explained, "This trend reaches an untouched demographic of people who would have never before stepped into a tattoo parlor." Perhaps it's time to get that Evil Eye inked on the inside of your wrist.

Minimalistic in design, these can be as elaborate or as simple as you want them, which is their big appeal, according to Inked.

These tats look just as interesting small-scale as they do completely sleeved.

Whether you get a minimalist band around your arm or a Sailor Jerry's type of pinup girl on your thigh, there are plenty of tattoo trends emerging in 2016. And just think: We're only a month in! Who knows what else will crop up in the time to come?

More like this
35 Summer 2022 Beauty Products Bustle Editors Swear By
By Bustle Editors
11 Fresh Fragrances Perfect For Summer
By Paris Giles
TikTokers With Eczema Are Opening Up About Topical Steroid Withdrawal
By Kui Mwai
The $6 Drugstore Beauty Product Taraji P. Henson Uses Every Single Day
By Danielle Sinay
Get Even More From Bustle — Sign Up For The Newsletter