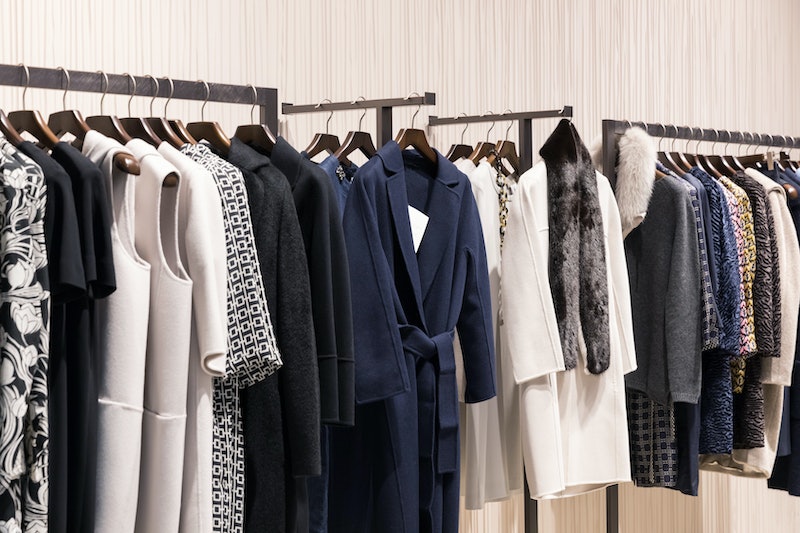 On Jan. 31, the news that a Dillard's employee allegedly body shamed a 13-year-old girl hit my social media feed. On top of the usual adolescent-going-to-a-dance worries — like landing your dream date, agonizing over whether an up-do or down-do might work best, and wondering whether you can really make it through three hours in heels — the pressure of a stranger suggesting that your body just isn't looking quite right is not something most would want to deal with.

Unfortunately, this is what allegedly happened to Megan Naramore Harris' daughter, Lexi, at a Dillard's in Kansas. According to Mashable, Harris took her daughter dress shopping for an upcoming formal, and when her daughter came out of the changing room with a grown-up red number on, the sales associate allegedly said she needed Spanx in order to wear it. Dillard's has not yet responded to Bustle's request for comment.

After the incident, Harris posted a body positive message on Facebook to the sales associate that has since gone viral. According to Mashable, "The message resonated with many; the post has been liked more than 300,000 times and has been shared more than 50,000 times."

In it, Harris explained why telling someone they need to change in order to be "perfect" can be very damaging, and that no one has the right to chink away at someone else's self-image or self-worth.

In 2014, a Dillard's Florida store "accidentally" fat shamed little girls during the holidays by hanging a sign in the girl's section that read, "Dear Santa, this year, please give me a big, fat bank account and a slim body. Please don’t mix those two up like you did last year. Thanks."

The retailer quickly took down the sign and explained that it was meant to be hung in a different section of the store. Personally, my response would still be, "Why?"

This is why Harris' message to the department store is so important. As she herself explained in her post, "[My daughter] did not need you telling her that she is not perfect. I hope this is shared and gets back to you so that you should not say something like that to a girl ever again. You never know what negative or positive thoughts they are thinking about themselves."

To prove that there does exist body positivity in a body negative world, here are a couple more fierce women whose work has gone viral because of the self love message behind it.

1. A Mother Showed Pride In Her Stretch Marks After Being Ridiculed In A Bikini

After Tanis Jex-Blake was made fun of by teens for tanning in a bikini, she took to Facebook with a response to the body shaming moment, saying, "I'm NOT sorry that my body has housed, grown, protected, birthed, and nurtured FIVE fabulous, healthy, intelligent, and wonderful human beings," along with a photo of her stomach.

Star of My Big Fat Fabulous Life Whitney Way Thore has been killing it on social media with her #NoBodyShame campaign for over a year. Seeing a plus size woman rocking it on television and being unapologetic in herself has undoubtedly inspired humans of all genders on a national level.

But Thore took things one step further when she proclaimed an end to body shaming as a whole, and encouraged us to use her hashtag as a means to empowerment. Today, #NoBodyShame houses almost 50,000 posts on Instagram, where people are breaking societal rules and looking flawless while doing it.

Whether you're standing up for your daughter, a stranger, or for yourself, being brave when it comes to promoting body positivity will never cease to inspire the masses. Loving yourself the way you are should be the only option.

More like this
What Is “Jello Skin”? The Latest Viral Trend To Know About
By Tomi Otekunrin
Halsey Calls Out Body-Shaming Comments On TikTok Amid Health Issues
By Jake Viswanath
I Was All For Medicating Mental Health Issues – Just Not For Me
By Anonymous, by Dana Smith
I'm A Fashion Editor & I Get Tons Of Compliments On These Cheap Things From Amazon
By Scarlett James and Nicole Zane
Get Even More From Bustle — Sign Up For The Newsletter