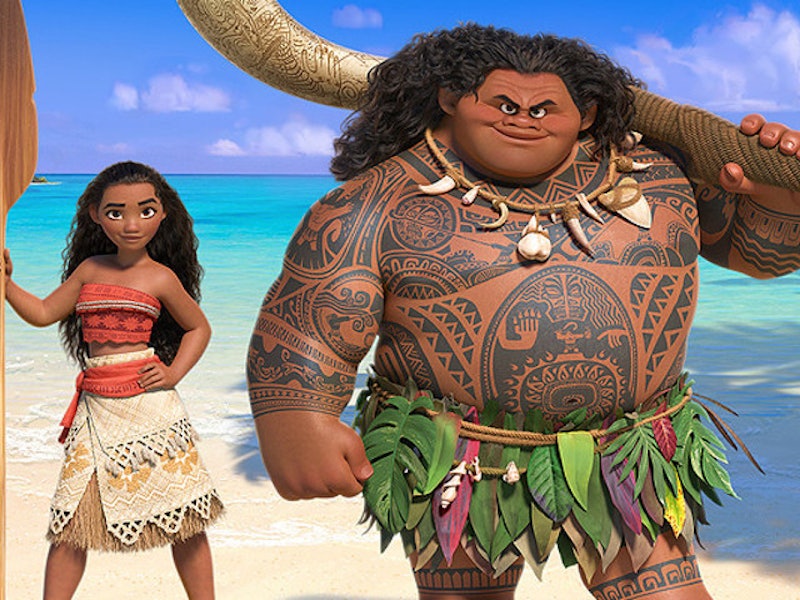 November 2016 is still a long ways off, but it is never too soon to get excited about Disney's newest princess movie, Moana . While you wait for the first full-length trailer to drop, there is no better time to take stock of everything there is to know about Moana so far. New information is coming in all the time thanks to stars Auli'i Cravalho (Moana) and Dwayne Johnson (demi-god Maui). In fact, Johnson recently took to Instagram to share a behind-the-scenes picture from a Moana rehearsal, shown below, teasing a big musical number in the process. Yes, Johnson will sing, or as he puts it in his post: "The honey coated gravel voice has entered the damn building."

Excited yet? Because you should be. Johnson's dulcet tones are just a small part of what is going to make this Disney movie so groundbreaking. Moana is Disney's first Polynesian princess, and her journey in the film is set to be an adventure on the grandest of scales. So while you anxiously await Nov. 23, here is everything you need to know about Moana so far, from the actors to the music to everything in between.

1. The Musical Numbers Are Going To Blow You Away

Hamilton star and writer Lin-Manuel Miranda is doing the music for Moana and he is planning to destroy you emotionally. In a recent Tweet, he revealed one of his songs made his wife teary-eyed, and according to Miranda, she's not one typically for sobs. That means you are going to need all the tissues.

2. Johnson Will Be Rapping

Johnson is no slacker. He will be singing and rapping his songs in the movie. "Today I will sing, I will rap and do it all in keys that don't exist — yet somehow make it all sound wonderful to the world's ear," Johnson promised in this recent post. I can't wait to see what kind of songs a demi-god sings.

3. Moana Is On A Journey To Save Her Family

Moana's story is not about the pursuit of true love. The young woman will use her navigational skills to find a mythical island that holds the key to saving her family. Her quest is yet another thing that distinguishes her from her other princess counterparts.

4. Hawaiian Mythology Will Play A Key Role In The Movie

Maui is an actual demi-god who plays a major role in Hawaiian mythology. For Moana he is a hero, and in reality he is a larger part of the rich culture Disney is exploring.

If you don't know Musker and Clements by name, I am sure you are at least familiar with their work. These two men were part of the Disney renaissance of the '90s, making The Little Mermaid, Aladdin, and Hercules. More recently, they gave the world The Princess and the Frog. Not too shabby.

An adorable pig Pau and a rooster named Hei Hei are coming along for the ride. Beyond their existence, not much is known about these cuties yet, but I'm betting they will both be scene-stealers. Have you ever met a Disney animal who wasn't?

7. Alan Tudyk Will Be Voicing... Somebody

Tudyk is basically Disney's secret weapon at this point. He has done voice work for Wreck-It-Ralph, Frozen, and Big Hero 6, plus he will be lending his voice to the upcoming Zootopia as well. Tudyk has been confirmed for Moana too, but his role is still being kept under wraps. Tudyk's Disney characters have mostly been bad guys, so far. That could mean he will be a troublemaker for Moana and Maui too.

8. The Animation Is Stunning

There is a level of realism in the animation that is absolutely drool-worthy. The first footage brings the movie's island setting to life with astounding detail. Watching Moana is going to be a visually spectacular experience.

Western Samoan singer Opetaia Foa'i and his group Te Vaka previewed Moana's theme tune at the D23 expo, and it will give you all the chills. Again, the music connects the movie to the Polynesian culture creating a unique look and sound for Moana's journey.

10. Moana Is Driven By Her Dreams

According to Musker, Moana is a dreamer. She has a passion for exploration, and a connection to the ocean itself. This might lead one to wonder if Moana has some god-like talents that could rival Maui's. She certainly sounds like a character with power just waiting to be harnessed.

Legend is going to play a key role in the storytelling behind Moana. Her journey will have both adventure and danger. Disney has promised sea monsters as well. Are you psyched yet? Because I am psyched.

Here's hoping Disney will release a trailer soon, but until then, let your imagination run wild with Moana theories.

More like this
Now That 'Renaissance' Is Here, Let’s Revisit Beyoncé’s First Solo Album From 2003
By Grace Wehniainen
At 28, Lesley Manville Was Acting, Picketing, & Singing Kate Bush Songs
By Olivia-Anne Cleary
Reese Witherspoon Gave Fans Hope For 'Legally Blonde 3' After This Surprising Movie Inspired Her
By Jake Viswanath
22 Movies On Netflix That Are Perfect For The Whole Family
By Bustle Editors
Get Even More From Bustle — Sign Up For The Newsletter