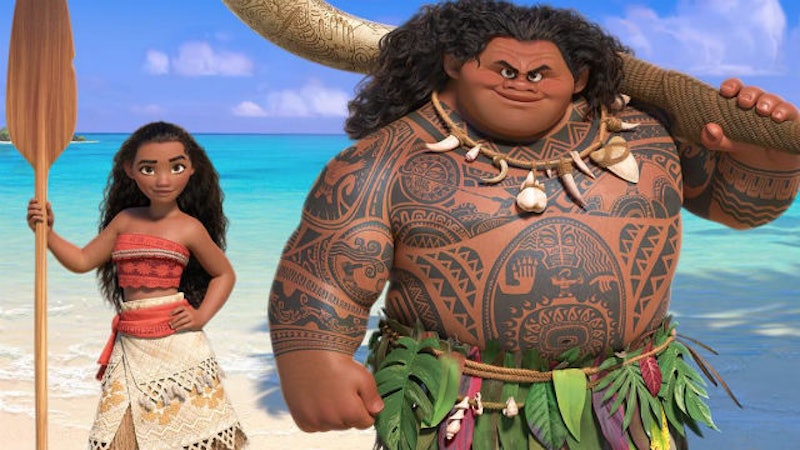 Can it be November 2016 now? I don't mean to rush the year along, but Disney's first look at Moana has arrived, and while there are just a few, all-too brief seconds of footage, the movie looks so majestic I want to go to there immediately. In case you haven't heard, Moana is Disney's first Polynesian princess and an all-around amazing young woman. She is a skilled navigator who teams up with a demi-god known as Maui (voiced by Dwayne Johnson) to find a legendary island that may hold the secret to saving her family.

This movie is something entirely new for Disney: it takes place in a setting that the company has never explored, the story is steeped in Polynesian culture, and it features a princess of color going on an epic voyage (and thus far, there is no mention of a prince). Adding another layer of authenticity to the story, Moana is being voiced by 14-year-old Hawaiian newcomer Auli'i Cravalho. As for Moana's companion on her journey, Maui is Moana's hero, but from the brief footage of the almost literally larger than life character it seems the demi-god is along for comic relief — and maybe even a little redemption since Disney is quick to point out he was "once" powerful.

The animation looks absolutely stunning. Seeing Moana in motion brings the character to vivid life. The look in her eyes is clearly the look of someone ready to see the world. Even without seeing the next shot, it is pretty clear Moana is looking out toward the ocean, which as a navigator, she will be deeply connected to. As princesses go, Moana seems to be more of a Merida type than a Cinderella, and that only makes me more excited for the movie. I love that Disney is exploring new cultures and also embracing a more feminist stance on princesses. Moana is actively leaving home to secure the safety of her family. Giving the character a quest and emphasizing her skills over the fact that she is the daughter of a great chief immediately creates a compelling narrative.

On a technical level, the animation is gorgeous. Disney chose two dark scenes to feature in the first tease, but if they look this good, just imagine how the ocean and beaches will pop under the sun. Also, in true Disney fashion, there will be adorable animal sidekicks along for the ride. While they're not seen in motion, Maui has a rooster and Moana has a piglet in the new pictures, and yes, they will no doubt be scene-stealers.

Watch the full preview of Moana below and then join me in counting down until November, or at least wishing for a full trailer from Disney.

More like this
Lin-Manuel Miranda & Tituss Burgess React To 'Little Mermaid' Casting Backlash
By Radhika Menon
Trevor Noah Hilariously Clapped Back At Racist Attacks On ‘The Little Mermaid’
By Brad Witter
Twitter Is Unravelling Over Wolverine’s Return For 'Deadpool 3'
By Darshita Goyal
The 50 Most Powerful Characters In The Marvel Universe, Ranked
By Johnny Brayson and Nola Pfau
Get Even More From Bustle — Sign Up For The Newsletter